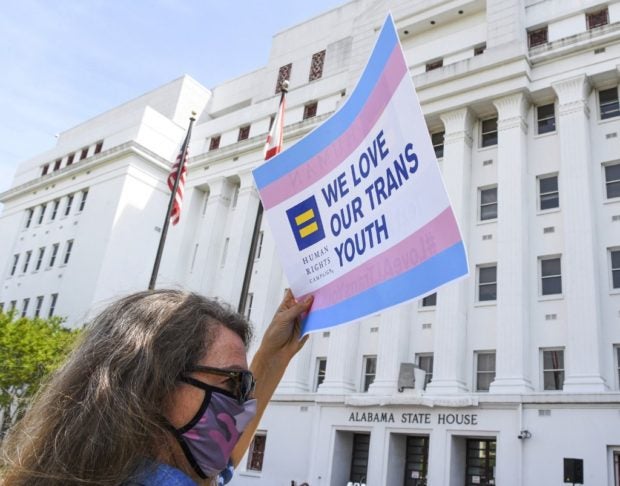 (FILES) In this file photo taken on March 30, 2021, Jodi Womack holds a sign that reads “We Love Our Trans Youth” during a rally at the Alabama State House in Montgomery to draw attention to anti-transgender legislation introduced in Alabama. Arkansas became the first US state to ban gender-affirming medical treatment for transgender youth on April 6, 2021, when the state legislature overrode a veto of a new law by governor Asa Hutchinson. The state assembly voted 25-8 to make the vetoed bill law. The law bans medical and surgical treatments aiming to add, remove or alter a young person’s physical attributes for their “biological sex” as determined at birth. Photo by Julie Bennett / GETTY IMAGES NORTH AMERICA / AFP

WASHINGTON — Arkansas became the first US state to ban gender-affirming medical treatment for transgender youth Tuesday when the state legislature overrode a veto of a new law by governor Asa Hutchinson.

Rejecting Hutchinson’s argument on Monday that the measure gave the state too much power over the decisions made by trans youth, their families and their doctors, the state assembly voted 25-8 to make the vetoed bill law.

The law bans medical and surgical treatments aiming to add, remove or alter a young person’s physical attributes for their “biological sex” as determined at birth.

It threatens health care providers with prosecution for providing or even referring such care for transgender people under 18, and blocks the use of private insurance coverage for such treatment.

It was the first to pass among a number of similar bills in other states.

Hutchinson said Monday that the debate over it had put Arkansas on the front lines of the what he called “the cultural war in America.”

“If House Bill 1570 becomes law, then we are creating new standards of legislative interference with physicians and parents as they deal with some of the most complex and sensitive matters involving young people,” he said.

“The state should not presume to jump into the middle of every medical, human and ethical issue.”

The American Civil Liberties Union said the new law will have “devastating and in some cases deadly consequences.”

“This bill will drive families, doctors and businesses out of the state, and sends a terrible and heartbreaking message to transgender people who are watching in fear,” it said in a statement.

The ACLU said it was already preparing litigation to challenge the law.

“Gender-reassignment surgeries can leave children sterilized and scarred for life. Medical researchers do not know the long term effects these procedures and therapies can have on kids,” he said in a statement.

“That is why many people equate them with experimenting on children.”

“Arkansas has put itself in the lead of a race to the bottom fueled by fear & disinformation,” David tweeted.

The Human Rights Campaign said there some 195 anti-LGBTQ bills introduced in 30 states, and dozens of them focused on restricting transgender rights.

One allows doctors to refuse to treat someone on a non-emergency basis based on their own moral or religious objections, including being able to reject LGBTQ patients.

The state is also weighing an order that public school teachers must address students by the name and gender on their birth certificates, even if the students themselves might identify differently.