71 buried in landslides in Negros Oriental 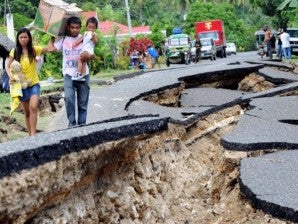 Army soldiers used picks, shovels and chainsaws in a race against time to rescue at least 71 people buried in landslides that covered 80 houses in two barangays (villages) in Guihulngan City and the adjacent La Libertad town, both in Negros Oriental.

President Benigno Aquino III will visit Dumaguete City, one of the areas affected by the temblor, on Wednesday, his 52nd birthday, Malacañang announced.

“(The President) will inspect damaged areas and meet with our countrymen affected by the calamity, as well as with the government workers who are providing much needed relief operations on the ground,” his spokesperson, Edwin Lacierda, said.

The number of victims of Monday’s 6.9-magnitude earthquake could still go up as some 90 houses were buried in Barangay Solinggon in La Libertad and in Sitio (sub-village) Moog, Barangay Planas in Guihulngan City. Eighty others were injured.

At least 45 people were confirmed dead—28 in Guihulngan, 10 in La Libertad, three in Jimalalud town, two in Tayasan town and two in Bindoy town, officials said.

In Moog, 29 houses were buried 6 meters (20 feet) deep when a portion of the mountain fell over the mountainside neighborhood during the temblor.

More than 70 soldiers belonging to the 11th Infantry Battalion had to stop digging the soft ground during aftershocks for fear of another landslide.

“But they try to dig and look for survivors,” said Colonel Francisco Patrimonio, commanding officer of the Army’s 302nd Infantry Brigade.

“It is not that we are not conducting operations. We are just waiting for a safer time to continue the retrieval operations,” Patrimonio said.

He said the rescuers needed graders and backhoes to hasten their mission. But he added that bringing the equipment to the site would be difficult with several bridges damaged or which had collapsed from the earthquake.

“What we have on hand we are using. We are using available tool, like shovels, picks and chainsaws,” Patrimonio said.

Twenty-one people were killed in Planas, five in Barangay Poblacion, and one each in Barangay Magsaysay and St. Francis Academy, all in Guihulngan. Eighty others suffered injuries and were brought to Guihulngan District Hospital.

Lieutenant Colonel Ramil Bitong, commander of the 11th IB, said an aerial survey of the landslide-hit areas showed that these were unstable and dangerous, especially during the aftershocks.

“There is a mountain of loose sand and boulders that make it dangerous to start digging,” Bitong told the Philippine Daily Inquirer in a phone interview Tuesday afternoon.

Survey teams reached the landslide areas on foot and confirmed this assessment, he added.

Bitong said professional rescuers with sophisticated equipment, such as a thermal imaging device, were needed for the rescue and retrieval operations.

Guihulngan Mayor Ernesto Reyes said rescue teams, some coming from Manila, were already in Moog. He said one person trapped in the collapsed public market had been rescued.

Bitong said rescue and retrieval operations had been completed in Tayasan, Jimalalud and Vallehermoso.

A report from the Negros Oriental Provincial Disaster Risk Reduction and Management Council said two teams of rescuers from the Federation of Volunteers through Radio Communication Inc. from Cebu were on their way to Guihulngan and La Libertad to augment the operations.

Two military helicopters (UH-IH) from Zamboanga City and a naval patrol gunboat were dispatched by the Armed Forces of the Philippines to help in the disaster relief operations.

“Practically the whole of the 302nd Brigade of about more than a thousand troops are directly involved in the search and rescue and relief operation,” Burgos said.

Governor Roel Degamo ordered the forced evacuation of residents in Planas since the landslide had blocked the Guihulngan River. They will be moved to temporary shelters near the city’s cemetery in Barangays Plaridel and Buenavista.

Bitong said roads in the affected areas sustained huge cracks. These included eight bridges in Guihulngan, one in Jimalalud and one in Martilo, La Libertad.

Degamo estimated the damage to infrastructure at P1 billion.

Water in Murcia and Moises Padilla towns, which are close to the volcano, has turned brown, said their mayors, Andrew Montelibano and Francisco Nazareno.

In Cebu, officials were checking buildings for any damage because of the earthquake.

Classes, however, were suspended in all public elementary and secondary schools in Central Visayas to allow an inspection of school buildings, said Recaredo Borgonia, the regional director of the Department of Education. With reports from Alex V. Pal, Carla P. Gomez, Nestor Burgos, Edison delos Angeles and Jhunnex Napallacan, Inquirer Visayas; and Christine O. Avendaño and Dona Pazzibugan in Manila