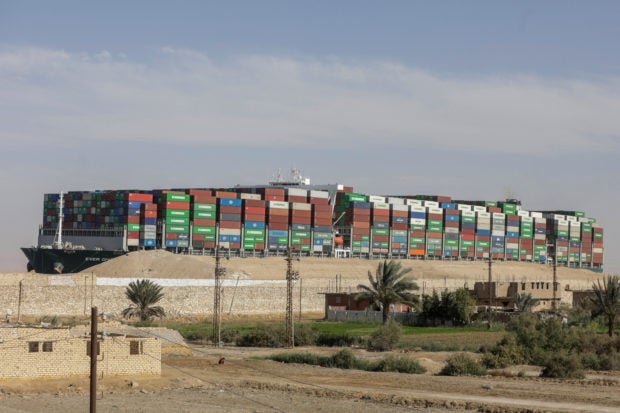 FILE PHOTO: Ship Ever Given, one of the world’s largest container ships, is seen after it was fully floated in Suez Canal, Egypt March 29, 2021. REUTERS/Mohamed Abd El Ghany/File Photo

CAIRO — Egypt’s Suez Canal must move quickly to upgrade its technical infrastructure if it is to avoid future shipping disruption, shipping industry sources said, as the major trade route tries to bounce back from a costly six-day closure.

International supply chains were thrown into disarray on March 23 when the 400-meter-long (430-yard) container ship Ever Given ran aground in the canal, with specialist rescue teams taking almost a week to free her after extensive dredging and repeated tugging operations.

Egypt will get two new tugboats, one next week and one in August, Suez Canal Authority (SCA) chairman Osama Rabie said after the ship was finally freed, as well as taking the biggest dredger in the Middle East and arranging for a further five new Chinese tugboats.

But shipping industry sources said specialist equipment and associated procedures have long struggled to keep up with the ever increasing size of commercial vessels.

“The average size of most vessels has increased exponentially over the last 15 years. The ability to salvage these bigger ships has not,” said Peter Townsend, a marine insurance industry veteran.

“The issue is getting containers off essentially a 20-story high building at sea.”

Michael Kingston, an international shipping specialist and an adviser to the United Nation’s International Maritime Organization, flagged such problems in 2013, three years before the MSC Fabiola container ship ran aground, also blocking traffic for days.

“The obvious way to lighten a vessel … is to take the containers off. They had no way of doing it. No equipment was readily available,” he said of the Ever Given incident.

The SCA says the canal can safely take vessels of the Ever Given’s size – with a maximum capacity of 20,000 TEU (20-foot containers) – even in rough weather.

As well as bigger tugboats, dredgers and offloaders, stricter guidelines on how ships transit the canal are needed, the industry sources said. Those could include using tugs to assist large vessels or only permitting transit during daylight hours.

“Of course, there are many lessons learned from the (Ever Given) incident. Of course, we have the capabilities,” the SCA’s Rabie said.

Visiting the canal this week, Egypt’s President Abdel Fattah al-Sisi said: “We have to give a strong message to the world that the Suez Canal … can transport world trade at this rate or more.”

It was not clear yet if the Canal would opt to extend a second channel south of the one that Egypt opened in 2015 at a cost of $8 billion along a 70-km portion of the waterway. Such an extension would allow traffic to continue flowing even if a ship were grounded.

“An expansion for the southern section of the canal can be under consideration,” said Sisi. “It’s up to the technical people. We don’t want to take measures just due to extraordinary situations.”