Lugaw: An essential in all its many forms | Inquirer News
Close
menu
search

Lugaw: An essential in all its many forms 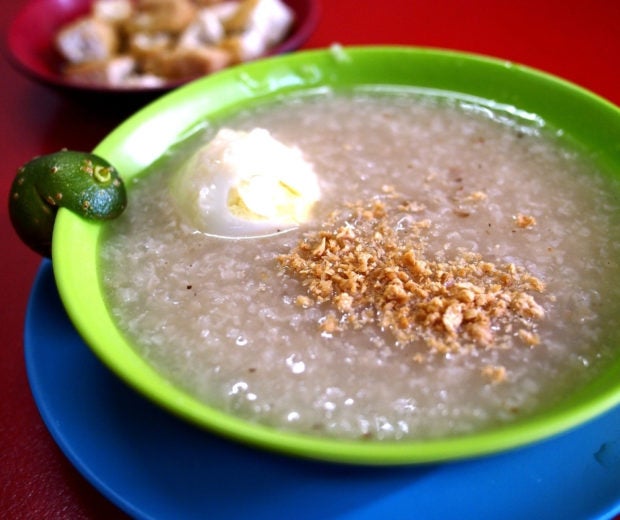 The lowly lugaw is ‘essential,’ being part of Filipino culture – NCCA

MANILA, Philippines — Long before this popular rice porridge was denigrated to the level of nonessentials, lugaw has been a staple breakfast fare and even mid-day snack of Filipinos.

A warm bowl of lugaw is a satisfying treat especially during rainy days, while also considered the perfect comfort for those who are feeling under the weather.

Made from cooked glutinous rice and flavored with fermented fish sauce (patis) or just plain salt, it is usually served with a serving of hard-boiled egg, and if one has some to spare, best with a side of pork and fried tofu (tokwa’t baboy), with a sprinkling of calamansi, pepper, spring onions and other savory ingredients suited to one’s taste.

Without any additional meat, lugaw is also an ideal dish for those who are fasting or practicing abstinence during the Holy Week.

So popular was this rice gruel that it has been steeped in the culinary culture of the Filipinos even as far back as a hundred years, giving birth to various other versions of the same potage, such as the Spanish arroz caldo and the Chinese congee. Fast forward to this day, modern-day lugawans are making a killing to serve those craving for a little comfort during the pandemic, thus the expression, “tubong-lugaw,” rings true.

Fast forward to this day, modern-day lugawans are making a killing to serve those craving for a little comfort during the pandemic, thus the expression, “tubong-lugaw,” rings true.

Thus, it is not surprising that despite the imposition of the enhanced community quarantine in many areas in the country due to COVID-19, many people would still buy and deliver what may be deemed as the lowly lugaw.

In light of the viral controversy surrounding this crowd favorite dish, INQUIRER.net looks back at the origin of lugaw as well as some of its different versions.

According to the National Commission for Culture and the Arts (NCCA), lugaw is not just popular comfort food but also a symbol of the Philippines’ rich culture.

The National Quincentennial Committee (NQC), on the other hand, regarded the local rice porridge dish as “one of the earliest documented food of our ancestors.”

In a Facebook post on Wednesday, NQC said that based on the 1613 Vocabulario de la Lengua Tagala by Fr. Pedro de San Buenaventura, lugaw is defined as “rice mixed with milk or water or of both (porridge).” 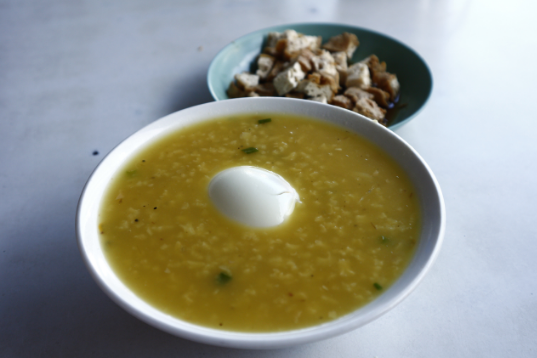 Meanwhile, TasteAtlas – a website described as an online encyclopedia and world atlas of traditional dishes, local ingredients, and authentic restaurants – described lugaw as “as soft food for sick people.”

“Warm, filling, and mushy, the dish acts as an ideal base for any type of meat and seasonings, just like a congee,” it added.

Some of the savory kinds of rice porridge are also influenced by Chinese-style congee which is topped with meat and other ingredients that make it a complete meal in itself.

Savory and sweet, lugaw’s many variants

Lugaw, nowadays partnered with toasted garlic chips, green onions, an egg and tokwa’t baboy, traditionally does not have any meat on it. The lugaw that we are familiar with is actually just a base for its savory or sweet versions.

Below are the characteristics of the savory and sweet variants of lugaw.

Arroz caldo translates to warm rice or rice stew. However, compared to lugaw, arroz caldo has chicken meat and is cooked in a ginger-infused broth.

Unlike lugaw and arroz caldo, goto, on the other hand, is prepared and cooked with innards, tripe, and beef or pork.

While most variants are salty and savory, the champorado is the sweet version of lugaw and arguably the most popular version of the rice porridge. It is a thick rice pudding made with cooked glutinous rice, cocoa powder or chocolate, and sugar.

Others prefer to add toppings like powdered milk or a drizzle of sweetened condensed milk or evaporated milk.

Champorado is usually served with salted dry fish as a hearty breakfast among many Filipino households. It can also be served cold for a sweet afternoon snack.

“The origins of the dish derive from a Mexican chocolate-based drink known as champurrado, which was introduced during the colonial period.” said TasteAtlas.

Today, the champorado already has an ube version, using the powder of another popular Filipino tuber, the purple yam.

Ginataang munggo is another perfect mirienda or midday meal. This dessert version of lugaw is prepared by cooking sticky rice and grounded munggo or mung beans in coconut milk.

Ginataang mais can be enjoyed warm or cold with a drizzle of coconut cream.

Similar dishes from other countries

Other than the Chinese congee, there are also many iterations of lugaw across the globe.

In Indonesia, there is a dish called Bubur Aryam which is a thick rice porridge topped with shredded chicken, scallions, and fried shallots. People can also douse it with soy sauce and sambal or chili paste.

“This breakfast staple probably originates from the Chinese rice porridge, but it employs regionally available ingredients and toppings to create an authentic Indonesian dish,” said the TasteAtlas.

Indonesia also has another dish called Tinutuan, which originated in North Sulawesi in the city of Manado. It is a savory porridge topped with sambal, fried shallots, and fried tofu.

Tinutuan is often served as a breakfast food along with other dishes such as fried fish.

Rice porridge in Japan is known as Okayu, which is usually eaten by sick people since it can easily be digested. It is sometimes consumed for breakfast.

This version of rice porridge is cooked using dashi stock or miso to have a subtle and mild flavor.

In the Middle-Eastern country of Oman, there is a spicy twist on the regular rice porridge by adding popular local spices such as turmeric, cumin, cardamom, ginger, cloves, cinnamon, garlic, and black pepper.

A case for lugaw as ‘essential’

The question on whether or not lugaw is essential stemmed from a viral video showing a female barangay personnel in Bulacan barring a delivery rider from picking up an order of lugaw supposedly due to curfew hours under the ongoing implementation of the enhanced community quarantine (ECQ).

The female barangay personnel likewise insisted that the savory food was not essential because people can live without it.

Malacañang on Tuesday already said that lugaw and or any food products are considered essential goods, and thus, its delivery may not be impeded.

“Lugaw, or any food item for that matter, is considered an essential good,” presidential spokesperson Harry Roque said in a statement.

The NQC on its social media post even said that “indeed, #Lugawisessential.”