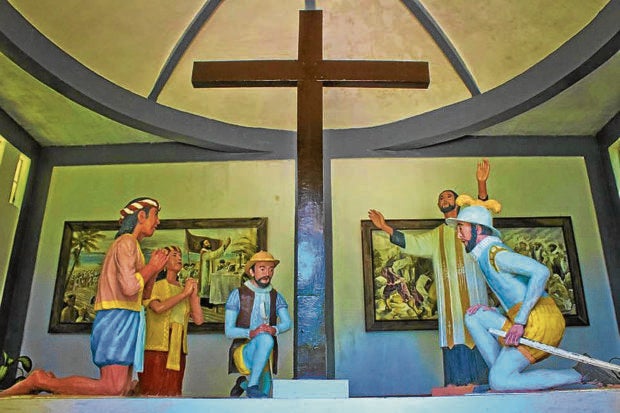 A tableau depicting the first Mass officiated by Fr. Pedro de Valderrama, chaplain of the Spanish fleet, on Easter Sunday on March 31, 1521, is built at Magellan Shrine as a reminder of the important role of Limasawa Island in the history of the Philippines and the Catholic Church in the country. —PHOTO COURTESY OF THE DEPARTMENT OF TOURISMIN EASTERN VISAYAS

TACLOBAN CITY –– Amid strict restrictions imposed by the government due to the coronavirus disease (COVID-19), about 1,000 people gathered at a shrine on Limasawa Island in Southern Leyte on March 31 to celebrate the 500th anniversary of the First Easter Mass in the country.

Pope Francis’ representative, Bishop Charles John Brown, was unable to attend the ceremony due to travel restrictions by the Department of Foreign Affairs for dignitaries.

Brown, however, sent his message to the people of Limasawa and the rest of the Filipinos during the quincentennial celebration of the First Easter Mass that took place on March 31, 1521.

“Five hundred years after the first Mass was offered in the archipelago, the Church in the Philippines is invited anew to go forth and become a community of authentic missionary disciples,” he said in a message read by Fr. Mark Vincent Salang of the Maasin Diocese.

Fr. Arthur Duarte, parish priest of Limasawa, was optimistic that the 500-year celebration of the First Mass “will further strengthen our Christian faith.”

The celebration started with the arrival of the Santo Niño image from Cebu, followed by the more than an hour of Pontifical Mass that started around 11 a.m. at the Magellan Shrine grounds in Barangay Magallanes.

In his homily, Maasin Diocese Bishop Precioso Cantillas said that despite the inclement weather and the threat of COVID-19, residents of Limasawa and pilgrims were able to celebrate the Holy Eucharist, a “great gift of God.”

“I am so happy and grateful that even in this time of pandemic and the not-so cooperative weather, a significant number of people are on this island and those in other parts of the country and the world to celebrate with us through social media,” he said.

Undersecretary Anthony Gerard Gonzales of the Office of the Presidential Assistant for the Visayas represented President Duterte during the event.

Among those present during the event were top officials of Southern Leyte led by Gov. Damian Mercado and Rep. Roger Mercado; Archbishop John Du of the Palo Archdiocese; Antipolo Bishop Noli Boco; and Bishop Oscar Florencio of the military ordinariate.