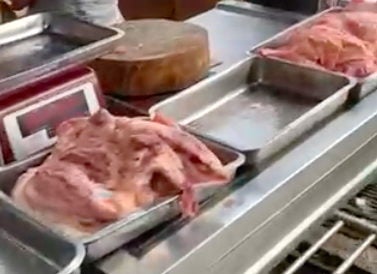 A CONCERN FOR MEAT INSPECTORS An image from a video taken by the group Samahang Industriya ng Agrikultura shows a stall in Balintawak market, Quezon City, selling frozen pork without the right cold-storage equipment

For Andrea dela Rosa and other meat vendors at the Divisoria market in Manila, the day begins at 2 a.m.

Before dawn breaks they start their backbreaking work—slicing meat, chopping bones and removing innards while wiping off pig’s blood. And then follows the relentless haggling with customers.

By 11 a.m. her work is done and she goes home with the day’s earnings.

But despite Dela Rosa’s diligence, it became increasingly difficult to put food on her family’s table due to the spike in pork prices that began last year. And the irony is not lost on her.

After the pandemic struck, prices went up, especially for fresh pork, which became “too expensive” for her customers, she said.

“Maybe because there are fewer pigs left due to ASF (African swine fever). If I keep selling fresh meat, we will go bankrupt because no one will buy, and my husband and I have a family to feed,” she said.

Before the ASF crisis, the 42-year-old vendor used to order 1,000 kilos of fresh pork to sell daily.

But with the spike in the price of fresh meat, she and most meat vendors in Metro Manila had resorted to selling imported frozen pork.

Like Dela Rosa, she switched to selling only frozen meat at a market in Novaliches. She’s able to buy frozen pork at almost half the price of a kilo of fresh pork.

With most consumers tightening their purse strings, resellers and traders have made a killing out of these frozen products.

For Dela Rosa and Gaspar, it’s a mode of survival. For local hog raisers, it’s akin to a death sentence.

The proliferation of frozen meat in markets sidelined several hog producers who are struggling to keep their businesses afloat amid the ASF threat.

“Our farm is medium-sized with about 600 sows, but we weren’t spared from ASF despite strong biosecurity measures. We slowly depopulated to about 16 sows by September. We had to lay off and retire many of our employees from about 35 to eight.”

The ASF is not transmissible to humans, but its spread has killed livestock businesses nationwide.

In a country where 70 percent of the local pork is produced by backyard farmers, many were forced to either depopulate or stop their production entirely.

This has reduced the country’s beginning swine inventory this year to 9.72 million heads, its lowest in 20 years, according to government estimates.

Frozen pork, while more affordable, may be sold in wet markets only if vendors have blast freezers or chillers for storage.

But not all vendors can afford one. Videos from Samahang Industriya ng Agrikultura (Sinag) showed resellers at Talipapa and Balintawak markets keeping their frozen meat inside plain cardboard boxes.

The meat is taken out for thawing, making it more susceptible to bacteria like salmonella.

The lack of government monitors allowed this unsanitary practice to spread across the country, especially among online sellers.

The National Meat Inspection Service (NMIS) warns that meat must be kept inside a cooler or an insulated container to avoid spoilage.

“In the case of imported meat, its frozen state must be maintained at all times until such time that it will be cooked,” it said in a public advisory.

Records from the NMIS showed that the volume of imported frozen pork in accredited freezers far outweighs those of local frozen pork.

As of the first week of March, there were 17,339 metric tons (MT) of imported frozen pork in accredited cold-storage units, and only 3,687 MT of local frozen pork.

Consumers can easily find all kinds of frozen meat products on Facebook—from premium cuts to sausage links and meatballs. Most of the sellers, however, are unlicensed.

“It is really a challenge that we even create bogus accounts to catch these people,” said Rieldrin Morales, director of the Bureau of Animal Industry. “We’ve dedicated a team to trace illegal sellers online, but we also rely on reports from consumers.”

A lot of these online meat sellers in the unreachable depths of the digital space elude the law so the NMIS has to rely on local governments to catch them as the agency doesn’t have police powers, according to Jocelyn Salvador, NMIS officer in charge.

The NMIS advises buyers of frozen meat products to find out how long it would take for their orders to reach their doorsteps. The delivery time must not exceed two hours from the point their orders leave the shop to avoid contamination.

“Fresh meat should not have any unusual odor and unusual color. It should also be firm to the touch when thawed,” said Morales, who had also served as NMIS chief.

According to Salvador, many consumers are wary of going out for fear of contracting the coronavirus.

This has led to the proliferation of more affordable but frozen meat products which can be delivered.

Frozen meat vendors in the markets like Dela Rosa and Gaspar and online meat shops are making brisk business to the detriment of dealers and vendors of fresh meat.

Chester Warren Tan, president and chair of the National Federation of Hog Farmers Inc., said further opening the country to more imported frozen meat would not only pose serious health risks, but would also push the remaining hog raisers completely out of business.

The Department of Agriculture in January proposed the twin measures of slashing the tariffs on imported pork and expanding the import volume with preferential tariff rates by over 300 percent.

Agriculture Secretary William Dar said the measures were “temporary actions” meant to quell the exorbitant meat prices in the market.

President Duterte has not approved the proposals.

“Rather than incentivizing the traders and the importers, why not incentivize the local producers? Our efforts to recover from ASF would be delayed for years if these proposals are approved,” said Tan.

According to industry estimates, only 30 to 35 percent of hog producers in Luzon have continued to operate since ASF crept into the region. In Visayas and Mindanao where ASF cases have been fewer, about 90 percent of hog raisers remain active.

Some of the idle pig farms, including Alfred Ng’s, have now been converted to raise tilapia and vegetables.

About P11 billion in tariff revenues are projected to be lost once the proposals are approved, according to Sen. Francis Pangilinan.

At the current tariff rate, collections are seen to hit P13.8 billion. This is expected to dip to P2.3 billion once tariffs are slashed to a low of 5 percent from 30 percent.

“Tariffs are meant to protect local industries … this could be used to support livestock raisers through providing insurance and incentivizing production. Why are we pushing for its reduction?” Pangilinan said.

Sinag chair Rosendo So said that money could also be used to construct the country’s first border facility to prevent the entry of another catastrophic animal disease.

Earlier this month, Chinese scientists discovered new strains of ASF that are said to be milder but more transmissible, sowing more fear among livestock and poultry raisers who cannot afford another ASF or bird flu outbreak.

For meat vendors like Dela Rosa and Gaspar, their businesses will go on with or without the tariffs.

“We’re doing well, in fact even better than before the pandemic,” said Dela Rosa. “People are spending a lot of money on food right now … Imagine, I pay P30,000 a month for my stall in the market, I have three kids who are going to school, and we’re alright.” INQ