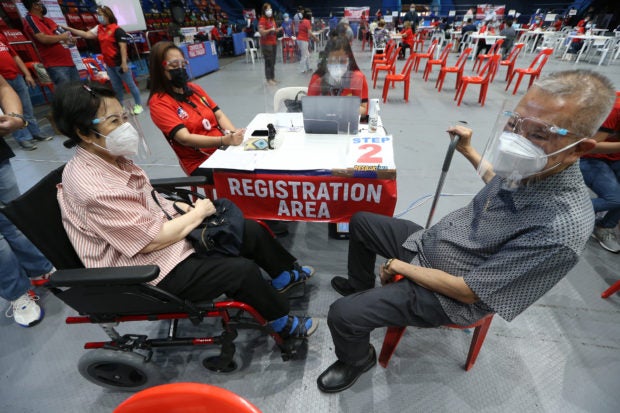 VACCINATION DAY In San Juan City on Tuesday, senior citizens, health workers and adults with illnesses gather at San Juan Arena to get their first dose of the AstraZeneca COVID-19 vaccine. The Department of Health has given over-65s in Metro Manila until Wednesday to register with their local governments for vaccination. —NIÑO JESUS ORBETA

MANILA, Philippines — President Rodrigo Duterte’s order to allow the private sector to import COVID-19 vaccines “at will” is meant to fast-track the purchase of vaccines to avoid the impression that the government is controlling the procurement, according to Secretary Carlito Galvez Jr., who is in charge of the country’s vaccine supply.

Citing the government’s limited supply of vaccines, Duterte directed Galvez on Monday to sign “any and all documents that would allow the private sector to import at will.”

“No matter the price or how many they want to import, that is fine with me,” Duterte said in a televised public address on Monday night, where he also warned unscrupulous people who would import fake vaccines.

The newly signed COVID-19 Vaccination Program Act of 2021 allows private entities to procure vaccines only in cooperation with the Department of Health and the National Task Force Against COVID-19 through a multiparty agreement.

Even with the president’s pronouncement, the requirement for the signing of a tripartite agreement for private sector procurement stays because the vaccines are only for emergency use and it is the government that would pay indemnity in case of adverse effects, according to presidential spokesperson Harry Roque.

Galvez said the president’s order was to fast-track the process for private sector importation of vaccines.

“His directive was there should be no delay so that at least there would be no perception that we are controlling the procurement,” he said in a press briefing on Tuesday.

The process has been slow in the past, he said, because the implementation rules for the COVID-19 Vaccination Program Act were not yet available.

The process is expected to move faster now that the rules have been handed down, he said.

He also said the COVID-19 vaccines would also be exempt from taxes and duties so these would clear customs easily.

Roque said the president’s statement was similar to the provision of the law, but echoed Galvez that Duterte wants the process hastened.

Roque also said private entities would not need to belong to a federation or organization to be able to procure vaccines. The government would sign a tripartite agreement with those who want to buy vaccines, he said.

It would also not require the businesses to donate vaccines to the government, although it is encouraged, he said.

It was only AstraZeneca that requires private entities to donate vaccines to the national government, he noted.

‘Stretch your patience a bit’

Duterte issued the directive to facilitate private sector procurement as he expressed frustration over the difficulty of securing COVID-19 vaccines for the country and asked the public to “stretch your patience and understanding a bit.”

“We are doing our best. We are not a vaccine producing country. We don’t have expertise, we don’t have knowledge, medical scientific knowledge. So we are waiting,” he said.

“I want to cry in front of you but my tears have been used up,” he added.

The Philippines, Duterte said, has been able to access only a limited supply of vaccines because the shots have been “shanghaied” by other countries that want these for themselves.

“There’s a ruckus going on and the fight for [vaccine] possession is [going on]. It’s a very serious one,” he said.

Galvez said there was “tension” in the global vaccine supply because the different countries were escalating their immunization drives and prohibiting the importation of the vaccines or their raw materials.

“This is our problem and we are having a severe, acute shortage of our global supply,” he said.

This would affect the Philippines’ vaccination plans for the first and second quarter of the year, he said.

“This would really have an impact but we are trying our best, we are using our diplomatic relations with the different countries,” he said.

Among the supplies that would be delayed are the 979,200 doses of the AstraZeneca vaccine from the global procurement pool COVAX that were initially expected in March.

These are now expected to arrive in April, Galvez said.

The World Health Organization (WHO) is prioritizing the countries that need the vaccines the most, he said.

As for concerns that this delay could affect the administration of the second dose of AstraZeneca vaccines for the country’s health workers, he said the WHO and COVAX have committed to deliver AstraZeneca shots in April.

Moreover, 2.6 million AstraZeneca doses procured by the private sector are arriving in May and it would donate half of these to the government, he said.

The businesses were also “more than willing to spare half of that for the second dose” as a contingency, just in case these would be needed, he added.

Galvez also said Russia’s Gamaleya Research Institute of Epidemiology and Microbiology had committed only 100,000 doses of the Sputnik V vaccine, even though the Philippines had ordered 3 million.

Philippine foreign affairs officials would talk with Russian officials to request that Russia accommodate the order for 3 million doses, he said.

Galvez said there could be a “slight delay” in the delivery of the country’s order for Novavax vaccines, which were expected in the third or fourth quarter, but added that the Serum Institute of India was committed to deliver these on time.

He also said the president wanted funding for efforts to give the Philippines the capability to produce its own vaccines.

Read Next
Mobster nabbed, thanks to his cooking videos
EDITORS' PICK
This new condo in the South will make you want to turn a new leaf
Legarda: Ending Violence Against Women, a cause for all
Sara Duterte calls for supporters’ unity after Go’s withdrawal from presidential race
CHR hopes inequalities exposed by COVID-19 pandemic are addressed
BOQ monitoring 64 travelers from ‘red-list’ countries amid Omicron
Smart offers wireless fiber-like speeds to Filipino homes with country’s first 5G Prepaid Home WiFi
MOST READ
DOH: Booster doses for fully vaxxed adults to start December 3
Another disqualification petition filed against Bongbong Marcos
Ex-DOT chief Ace Durano convicted of graft over 2009 project
Roque defends Bongbong Marcos: ‘He was only 15 years old in 1972’
Don't miss out on the latest news and information.