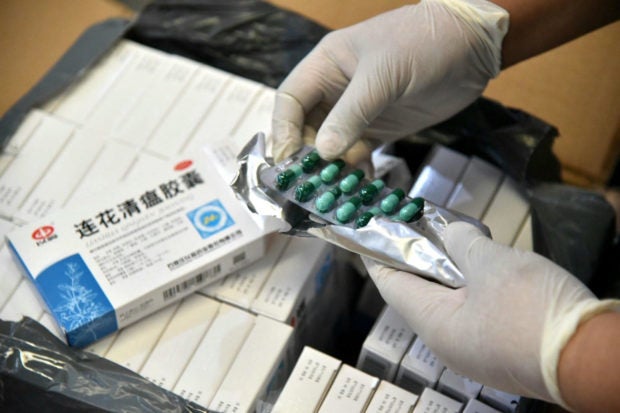 BEFORE FDA APPROVAL Misdeclared as vitamins, a shipment of the Chinese drug Lianhua Qingwen was seized by customs officials at Ninoy Aquino International Airport in May. —CONTRIBUTED PHOTO

During a House health committee hearing on Tuesday, Domingo announced that the Dangerous Drugs Board (DDB) recently delisted traditional Chinese medicine as a dangerous substance.

“Lianhua has been registered with the FDA since last year. This is registered as a traditional Chinese medicine for pulmonary conditions,” he said.

“It has recently been delisted by the Dangerous Drug Board as a dangerous drug kasi po yung ephedra (ephedrine),” according to Domingo.

As a result, the patient does not need an S2 prescription to purchase it, he added.

An S2 prescription can only be issued by a physician with an S2 license from PDEA.

The FDA chief later told INQUIRER.net that the Chinese drug is “still a prescription medicine.”

“[A] regular doctor’s prescription will do,” he said.

Recently, the therapeutics and medication safety committee (TMSC) of Makati Medical Center said people should not take Chinese medicine without a doctor’s prescription.

According to the hospital, this medicine contains “ma huang”  from which ephedrine is extracted.

Ephedrine, which is used to treat low blood pressure symptoms during anesthesia, is considered a harmful medication under the law and can only be administered by a physician with an S2 authorization granted by PDEA.

The FDA previously stated that Lianhua is not registered as a COVID-19 medication in the Philippines, but only traditional Chinese medicine.

The drug’s certificate of product registration for the Philippines claimed that it can help eliminate heat toxin invasion of the lungs, including symptoms such as fever, aversion to cold, muscle soreness, stuffy and runny nose.