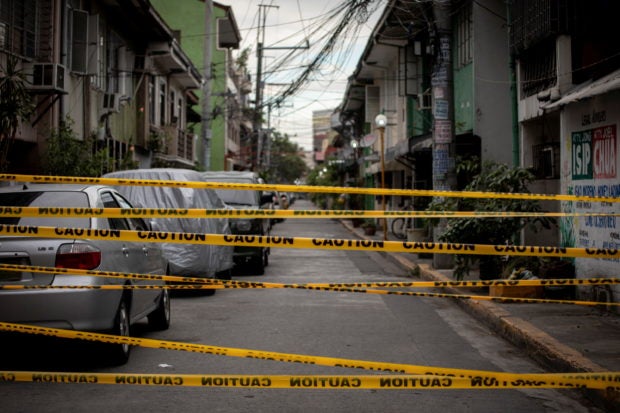 A view shows a makeshift barrier set up on a street of a village under lockdown amid rising coronavirus disease (COVID-19) infections in Manila, Philippines, March 12, 2021. REUTERS/Eloisa Lopez

MANILA, Philippines — The Department of Budget and Management (DBM) announced Monday that 22.9 million beneficiaries in the “NCR Plus bubble” – Metro Manila, Bulacan, Rizal, Cavite, and Laguna – would receive government financial assistance as a result of the imposition of enhanced community quarantine (ECQ).

In a televised briefing, DBM Secretary Wendel Avisado disclosed that this number accounts for 80 percent of low-income households in the five ECQ areas from March 29 to April 4 due to an increase in new COVID-19 cases.

“Based on the latest populations statistics from NEDA [National Economic and Development Authority] there are estimated 22.9 million beneficiaries which correspond to the 80 percent low-income population in NCR, Bulacan, Rizal, Cavite and Laguna and these are the areas placed under ECQ,” Avisado said in an online Palace briefing.

Avisado said that the DBM had already sent recommendations to the Office of the President on the assistance to be given to ECQ-affected individuals, but he declined to provide any further information.

“It’s definitely lower than what we have given during the Bayanihan 1,” Avisado said when asked how much aid per beneficiary will be given.

When the lockdown began in 2020, the government gave P5,000 to 8,000 in assistance to indigent families under the social amelioration scheme.

Avisado said that the funds for the upcoming assistance would come from the remaining unutilized balances of Bayanihan 2, the country’s second stimulus package.

Senator Bong earlier revealed that P23 billion is available for another round of financial assistance. He added that DBM recommended assistance be provided in kind.