At least 5 dead as tornadoes rip through Alabama, destroying homes 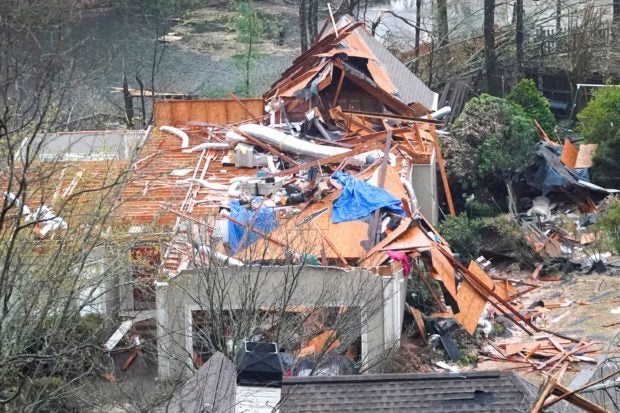 A house is left missing a roof after a tornado passed through the Eagle Point subdivision in Hoover, Alabama, U.S. on March 25, 2021. REUTERS/Marvin Gentry

The five confirmed fatalities were in Ohatchee, a town of about 1,200 people in the northwestern corner of the state where a twister ripped apart homes and downed trees and power lines, according to the Calhoun County Emergency Management Agency.

Calhoun County coroner Pat Brown confirmed to the Gadsden Times newspaper that three of those killed were family members in a house that was hit. In addition, an adult male died in his mobile home, and a female adult died in another mobile home.

Rescue crews were tending to injured survivors and searching for additional victims, the agency said.

Photos posted on social media showed a line of buildings near Ohatchee that had collapsed or been ripped apart, with roofs sheared off, exposing furniture and other contents. A white church steeple, still intact, rested next to a destroyed structure.

In Pelham, Alabama, about 60 miles southwest of Ohatchee, fire chief Mike Reid told news website Al.com that about 60 homes were damaged in the area, but no fatalities or injuries were reported.

Tens of thousands of people were left without power.

Allison Allred, a 23-year-old floral designer, hid in a hallway with her 73-year-old grandmother in their home in Georgia’s Bartow County, near the Alabama state line.

“I was crying. … We got really panicked. … My heart was racing. It was awful,” she said in a phone interview. “It had been hailing and it was raining so heavy you couldn’t see anything. It was very dark, but thankfully we are safe.”

A police officer in Florence was struck by lightning as he set up road barriers, the police department there said. The officer was “conscious and responsive” at North Alabama Medical Center, Florence police said on Twitter.

More tornadoes may have touched down in the area, Darden said, but the number of twisters would be unknown until a survey can be completed in the coming days. 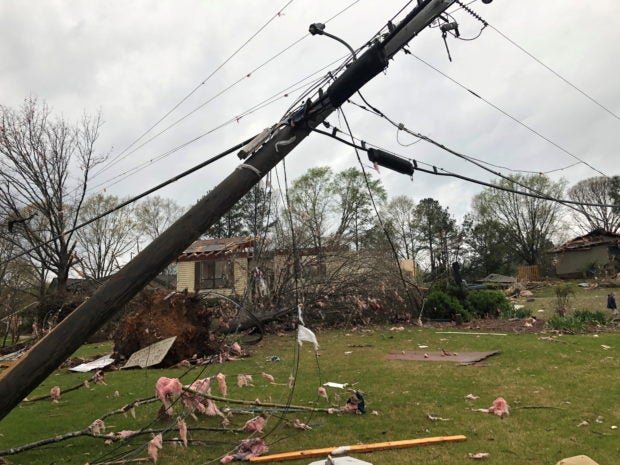 Damage is seen after tornadoes tore through Pelham, Alabama, U.S. on March 25, 2021. Image obtained by REUTERS.

“The number is not as important as the magnitude of what has transpired,” he said. “We are seeing significant damage in several communities. There are many counties in central Alabama that have been hard hit with substantial damage.”

The news website Al.com said that “multiple injuries” had been suffered in Shelby County, southeast of Birmingham. No further details were immediately available.

“Shelby County has suffered significant tornado damage. We can confirm local residential structures have been completely destroyed,” Shelby County Sheriff John Samaniego said in a statement to Al.com. A search and outreach effort would “continue throughout the night and into the early morning hours,” he said.

In Jefferson County, the sheriff alerted residents that another twister had struck there. “Jefferson County now has a CONFIRMED tornado on the ground. … SEEK SHELTER IMMEDIATELY,” the sheriff’s department said on Twitter.

First lady Jill Biden canceled a trip to Alabama with actress Jennifer Garner that had been planned for Friday to promote President Joe Biden’s coronavirus relief plans, according to the White House.

Read Next
Myanmar frees more than 300 detained since coup: prison official
EDITORS' PICK
Petecio, Obiena get chances to shoot for gold in their events
Nintendo Switch new model – Nintendo Switch OLED is coming!
FILREIT leading growth in sustainable office spaces
ECQ will authorities time to prepare for a surge – DOH
EDITORIAL: Raise the age of consent
MVP Group mounts unprecedented vaccination drive for 60,000-strong workforce
MOST READ
Tony Hawk had to clarify that Margielyn Didal was just joking
Aljur after separating from Kylie: For everyone’s sake, including my kids, I’ll always choose to be happy
ECQ again? Community pantry leader speaks out
ECQ will give authorities time to prepare for a surge – DOH
Don't miss out on the latest news and information.