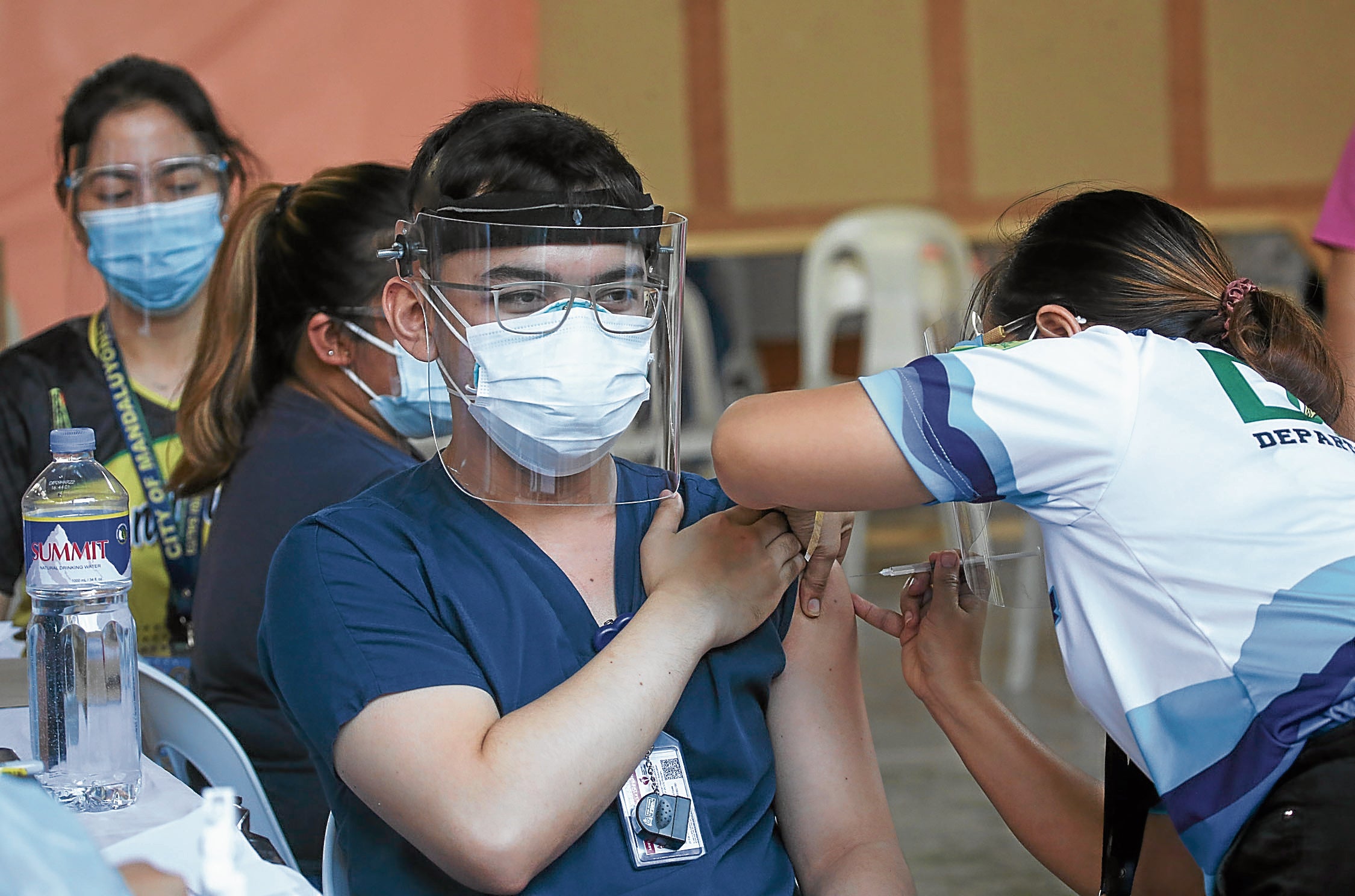 TOP PRIORITY Health workers receive their first dose of the AstraZeneca COVID-19 vaccine at Hulo Integrated School in Mandaluyong City on Thursday. The Department of Health has complained about local officials jumping the line and getting themselves vaccinated ahead of health workers, the top priority group in the national government’s vaccination drive. —LYN RILLON

President Rodrigo Duterte has ordered the investigation of local officials who got themselves vaccinated against COVID-19 ahead of health workers, the Department of the Interior and Local Government (DILG) said on Thursday.

In a statement, DILG officer in charge Bernardo Florece Jr. said five mayors who skipped the line had been ordered to explain their actions and given three days to respond to the order.

All the five officials said they had themselves inoculated to boost vaccine confidence among their constituents.

At a news briefing on Thursday, Densing said Parañaque Mayor Edwin Olivarez would also be ordered to explain the vaccination of movie actor Mark Anthony Fernandez.

Speaking in a television interview, Olivarez said he was prepared to “explain everything” to the DILG.

Parañaque city health officer Olga Virtusio said on Wednesday that Fernandez was vaccinated because the actor had hypertension and was on a quick substitution list of people who would take the vaccine if health workers opted out of inoculation.

Florece, in his statement, told the governors, mayors and other local officials to follow the national government’s list of priority groups in the vaccination drive.

At the top of the list are health professionals, medical students, nursing aides and other hospital workers involved in fighting the coronavirus pandemic.

“The intent of the national government is that all our medical front-liners must be vaccinated first, because we need to protect our health-care system first and foremost,” Florece said.

The Department of Health (DOH) on Wednesday complained against the line-jumpers, saying they were using vaccines that were supposed to be given to health workers under the national vaccination program and agreement with the World Health Organization (WHO), which had warned that breach of the guideline could jeopardize countries’ requests for vaccine donations from the global vaccine-sharing pool COVAX.

The DOH had asked the Department of Justice to look into the violation of the priority lists and determine what penalties could be imposed on the line-skippers.

Guevarra said that while there are no penal provisions in the new vaccination law, the code of ethics for government officials and employees provides penalties for certain acts of omission. These include misconduct, abuse of authority, and conduct prejudicial to the interest of the service, he said.

In a televised address to the nation on Wednesday night, President Duterte said he found the mayors’ claim that they were encouraging their people to get shots a “gray area.”

“What they said, their reason is—I think that is a universal excuse—for their constituents not to be afraid [of vaccination]. For me, that’s a gray area there . . . What should have been done first, really . . . whether or not they jump the COVID-19 line of vaccination would require a certain amount of legal study,” Mr. Duterte said.

The President named the five mayors from Southern Tagalog, Visayas and Mindanao, and Mayors Elanito Peña of Minglanilla, Cebu, and Victoriano Torres, Virgilio Mendez and Arturo Piollo II of Alicia, San Miguel, and Lila, all in Bohol, as the ones who got themselves inoculated with COVID-19 vaccines ahead of health workers.

Mr. Duterte pointed out that the vaccines being distributed in the Philippines were donations, and that the country might not get anymore vaccines from the WHO-led COVAX if it was proven that the doses from the pool were not given to health workers

‘Not peace and order agenda’

The Commission on Human Rights (CHR) on Thursday joined the DOH in complaining against the line-skippers, telling government officials who break the priority rule that they are depriving health workers of vaccines that they need to continue serving, and jeopardizing the Philippines’ chance of receiving more vaccines from COVAX.

In a statement, the CHR also reminded the Inter-Agency Task Force for the Management of Emerging Infectious Diseases, the temporary government body managing the administration’s coronavirus response, that the pandemic is a “health crisis and not a peace and order agenda” that’s best resolved by practices anchored on public health and not on military strategies.

Lawmakers have demanded that the task force be revamped, if not abolished outright, and its leadership be given to civilians with expertise in public health instead of military generals.

Mr. Duterte has refused to reorganize the task force, saying the pandemic was not just a matter of medical science.

In his news briefing on Thursday, presidential spokesperson Harry Roque said jumping the line in the vaccination drive “is wrong” that such incidents should not happen again.

Roque said city health officers were also to blame because they requested the mayors to have themselves vaccinated with CoronaVac to encourage health workers to get shots of the China-made vaccine.

“This was because their experience is that many [health workers] did not want to [be] vaccinated with [CoronaVac], and that’s the truth. But I repeat, there was such a proposal but it was not approved,” Roque said.

Only three people who were not on the priority list were allowed to be vaccinated—vaccine czar Carlito Galvez Jr., his deputy Vince Dizon, and Metropolitan Manila Development Authority chief Benhur Abalos. —WITH REPORTS FROM TINA G. SANTOS AND KRIXIA SUBINGSUBING