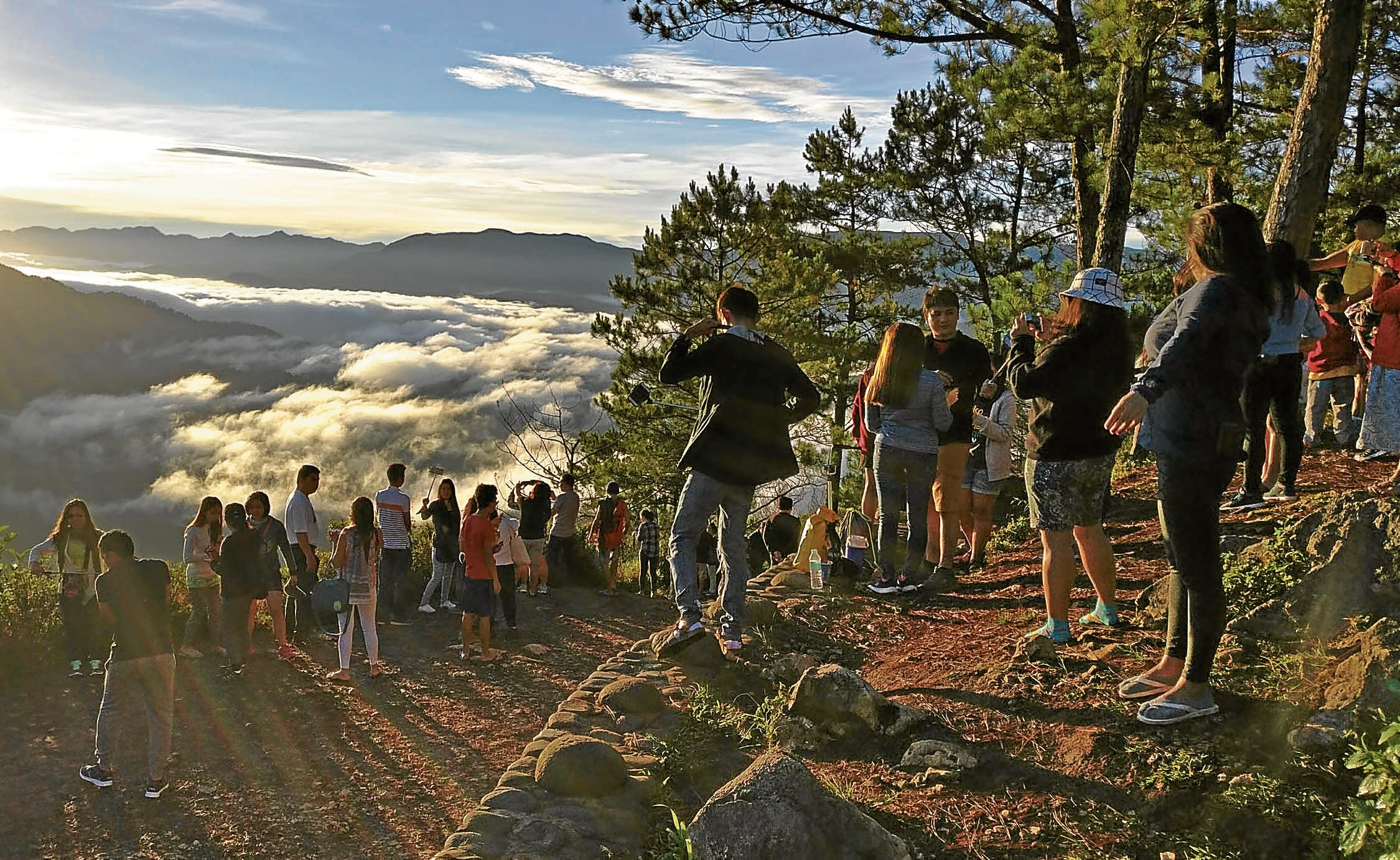 SAGADA SUNRISE In this photo taken in November 2017, tourists brave the cold to wait for sunrise amid a sea of clouds at Kiltepan Point in Sagada, Mountain Province. The tourist town of Sagada, which has been closed to leisure travelers since the pandemic struck last year, has seen an increase in its COVID-19 cases. —REM ZAMORA

The Cordillera has logged almost 200 daily coronavirus infections during a weeklong case monitoring from March 17 to March 24, an official of the Department of Health (DOH) in the region said on Thursday.

It also saw four to five average daily fatalities within the monitoring period. As of Wednesday, the region had 259 deaths.

The number of active cases of COVID-19 in the tourist town of Sagada in Mountain Province also rose to record-high 117 on Wednesday, DOH officials said.

This closely trailed the numbers of cases in the capital town of Bontoc, where most of the 41 patients who contracted the United Kingdom variant (B1.1.7) of the disease in the Cordillera were detected since January.

Bontoc has 238 active cases out of its 1,198 infections recorded since last year, according to the provincial health office.

Control movementSagada, like the rest of the Cordillera, has not welcomed back tourists since last year’s Luzon lockdown. It registered 196 COVID-19 cases since the pandemic began.

Health authorities were still determining the cause of the outbreak in Sagada.

DOH officials have asked local governments in the Cordillera to contain the surge by controlling movement, particularly during the Holy Week when families may again gather, Pangilinan said.

“NCR plus (Metro Manila’s general community quarantine or GCQ, which had been extended to its neighboring provinces of Bulacan, Laguna, Cavite and Rizal) has helped us,” she said, noting that it restricts movement of residents within the containment zone.

This means that no leisure travelers from these areas will come to Baguio, which is allowed to accept tourists while it is under a more relaxed quarantine status.

Metro Manila and the provinces in the so-called “GCQ bubble” represent 70 percent of Baguio’s tourist market.

The ease of travel restrictions was supposed to stem the bleeding of the economy, Pangilinan said, but the DOH is discouraging all forms of nonessential travel.

“Let us be patient until the surge has ended. We can observe Holy Week in our midst by seeking out quiet places where we can meditate,” she said. 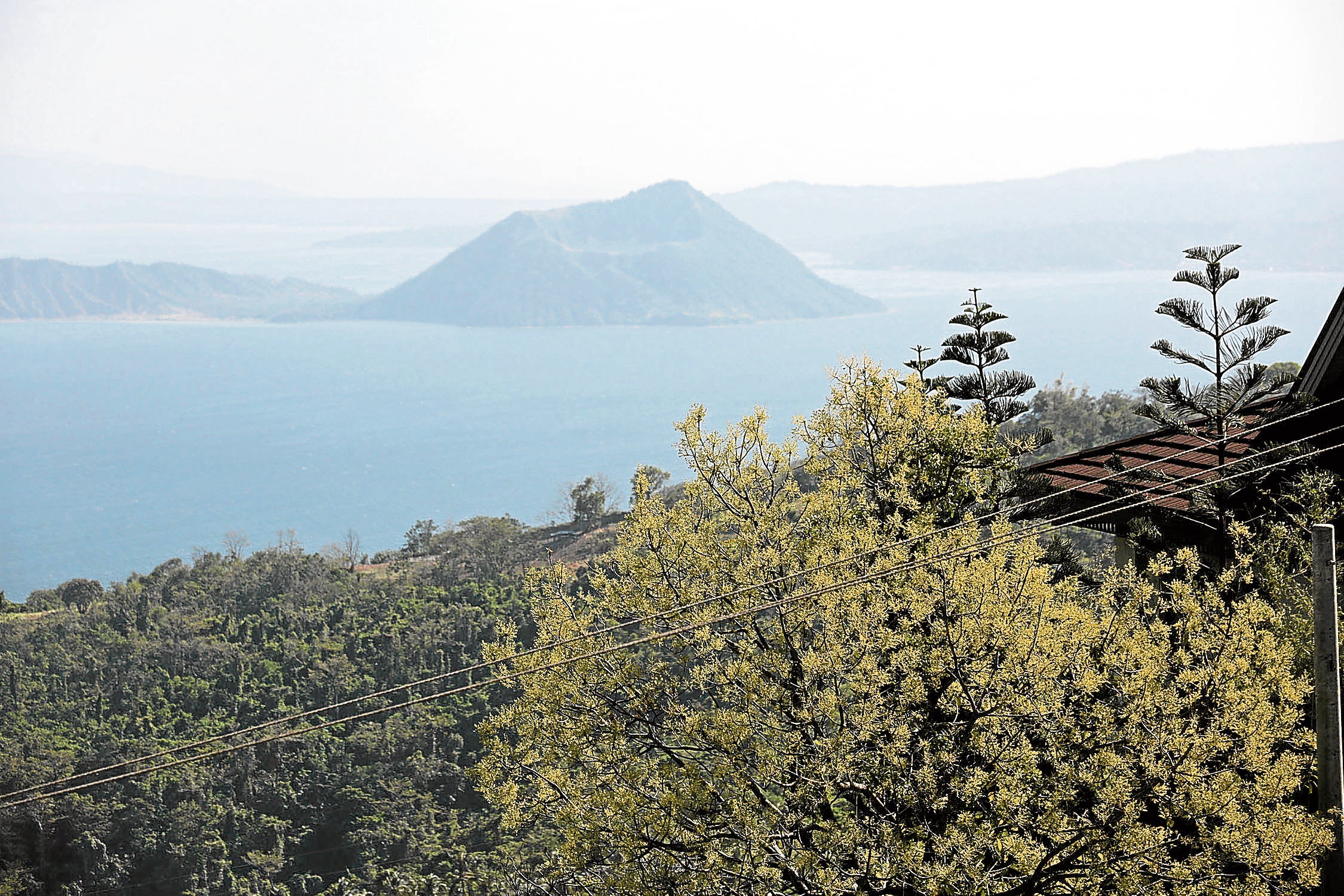 TEMPORARY CLOSURE Several tourism establishments and destinations in Tagaytay City are temporarily closed as the government discourages people to travel until after the Holy Week to help slow down the spread of COVID-19 infections in Metro Manila and its nearby provinces. —GRIG C.MONTEGRANDE

In Southern Luzon, the provinces of Batangas and Quezon are keeping a tight watch on the rate of infections in their localities to ensure they will not experience the sharp increase in cases now affecting Metro Manila and its nearby provinces in Calabarzon region.

Batangas and Quezon are the two remaining provinces in the region not under GCQ.

Quezon Gov. Danilo Suarez, in an order on March 22, imposed added restrictions on travelers passing through the province, limiting them to only authorized workers, returning residents of Quezon, and those bound for the Bicol region and the Visayas. Essential and emergency travels are allowed.

Already, Quezon is experiencing a spike in COVID-19 cases, with 42 new infections reported on Thursday, bringing the total so far in March to 529, a huge jump from the 342 cases recorded in February, the province’s health office said.

The province had 443 active cases as of Thursday, up from 171 reported on March 1.

In Batangas, officials asked residents to strictly comply with health protocols with cases also rising in the province.

Batangas recorded 1,307 cases from March 1 to March 24, four times more than the 33 reported at the start of the month, the provincial health office reported.

The city of Tagaytay in Cavite province has shut down many of its tourism destinations even if it is part of the GCQ bubble.

Tagaytay Mayor Agnes Tolentino tasked barangay officials to form groups that will guard the entry and exit points to monitor the movement of people to and from their respective territories, in addition to checkpoints guarded by policemen.

The 12-day border closure would include those coming from the neighboring Occidental Mindoro province and those from Metro Manila and nearby provinces. —WITH A REPORT FROM MADONNA VIROLA

Read Next
Over half of AstraZeneca vaccine share of C. Visayas unused
EDITORS' PICK
Finding your dream home is now easier with RLC Residences
MVP Group mounts unprecedented vaccination drive for 60,000-strong workforce
Metro Manila under ECQ from August 6 to 20
Nintendo Switch new model – Nintendo Switch OLED is coming!
Lorenzana: ‘VFA in full force again’
NCR under GCQ ‘subject to heightened & additional restrictions’ until August 5; no dine-in
MOST READ
Metro Manila under ECQ from August 6 to 20
Eumir Marcial eyes repeat vs fellow pro Darchinyan for sure Tokyo medal
OVP ‘insulted’ by Trillanes’ claims vs Robredo in meeting with Lacson
Wizards trade Russell Westbrook to Lakers in blockbuster
Don't miss out on the latest news and information.