Mindanao local execs who got jab: 'We only want to show the vaccine is safe' | Inquirer News
Close
menu
search

Mindanao local execs who got jab: ‘We only want to show the vaccine is safe’ 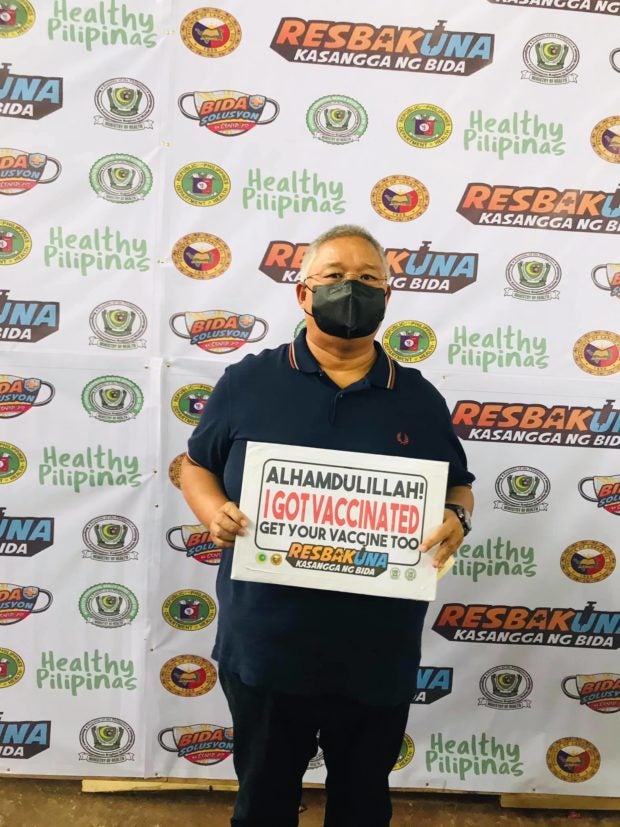 MARAWI CITY –– Mindanao local officials who jumped the vaccine line said they were not doing it to save themselves but to show to their reluctant and fearful constituents that taking the vaccine is safe.

Lanao del Sur Gov. Mamintal Adiong, Jr., the first and only elected government official in the province who received a vaccine together with health workers on Monday, was questioned why he got the jab when he was not a healthcare worker.

Jennie Tamano, the provincial information officer, said Adiong was inoculated to boost the people’s confidence in the vaccine.

“Governor Adiong wants to set an example to his constituents, who mostly do not believe in the COVID-19 virus and vaccination,” Tamano said.

Dr. Alinader Minalang, head of the Integrated Provincial Health Official (IPHO) in Lanao del Sur, said Adiong was qualified to be vaccinated as a frontliner and a person with comorbidities.

“He is asthmatic, the first among the local chief executives, so far, who was inoculated,” Minalang said.

“Municipal mayors who want to be vaccinated will be qualified, only if they are senior citizens or have comorbidities.”

Haroun Alrashid Alonto Lucman Jr., the former vice governor of the defunct Autonomous Region in Muslim Mindanao (ARMM) and a relative of the governor said he was among the first to receive the AstraZeneca vaccine on Monday because only very few wanted to be vaccinated.

Lucman, now a private citizen, said he was invited to get himself inoculated as very few people showed up at the vaccination site at the New Capitol Complex in Marawi City. The local government wanted to show that the vaccine is safe.

“In the past few days, only very few people belonging to the so-called priority groups came. People do not want to be vaccinated. Most of them are afraid because of the disinformation; so, our inclusion was (only) to show that the vaccine is safe and encourage (people) to get the vaccine. Surprisingly, after our inoculation, more people came in droves,” said Lucman.

Before the vaccines arrived, Minalang said Maranaos had expressed fear and were not too keen to be inoculated.

But almost all of the 3,000 doses of CoronaVac allocated for Lanao del Sur by the Bangsamoro government had been consumed after a week of vaccination.

“I am very surprised,” Minalang said. “(We expected that) no one will come to get themselves vaccinated. Instead, the opposite happened. My observation is that vaccine hesitancy had been reduced, and the trust and confidence on the vaccine had increased,” Minalanag said.

In South Cotabato, Mayors Dibu Tuan and Sulpicio Villalobos of the towns of T’boli and Sto. Nino, respectively, were among the five mayors in the country given “show cause” orders by the Department of the Interior and Local Government for getting the COVID-19 vaccines ahead of those on the priority list.

Villalobos told reporters after he was inoculated on March 19 that the local health officer advised him to get the AztraZenica vaccine due to his exposure to COVID-19 isolation units in his town.

He also said he decided to get himself vaccinated to encourage his constituents to get the vaccines.

Aside from Villalobos, the president of the town’s Association of Barangay Captains was also inoculated, according to the mayor.

Tuan, who earlier admitted he took the shots on March 19, said he expected more of his constituents to follow suit after his vaccination proved that there was nothing to be afraid of.