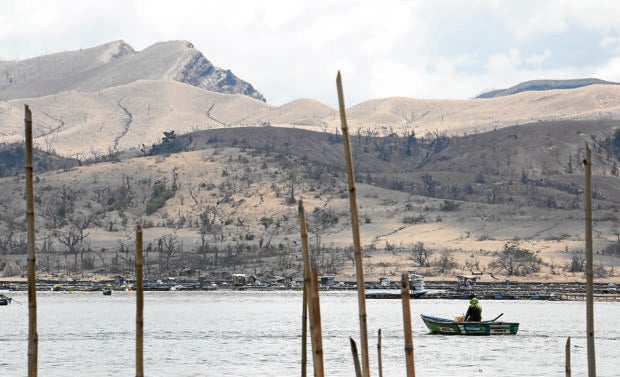 (File photo) DANGER ZONE Taal Volcano Island, “Pulo” to locals who once lived there before the volcano erupted in January last year, is largely deserted after the government declared the area a permanent danger zone. The volcano’s alert status has been raised to Level 2, indicating increasing unrest. INQUIRER/NIÑO JESUS ORBETA

MANILA, Philippines — The Philippine Institute of Volcanology and Seismology (Phivolcs) on Wednesday said it has observed “elevated increase” in the seismic activity of Taal Volcano, which could mean that an eruption is more possible.

In a notice, Phivolcs said a total of 2,015 volcanic tremors and 734 low-frequency volcanic earthquakes have been recorded in Taal since February 13. It also registered 18 hybrid earthquake events since then.

According to Phivolcs, most of the temblor occurred at shallow depths of lower than two kilometers but some large earthquakes were generated in the deeper two- to six-kilometer region beneath the Taal Volcano Island (TVI) edifice.

Sulfur dioxide gas emission in the previous week, meanwhile, has been generally high, Phivolcs said, with a peak of 1,184 tons on March 21.

“The above parameters indicate that magma has been migrating across shallow depths beneath TVI, increasing the possibilities of magmatic eruption,” Phivolcs said.

Alert Level 2 remains over the volcano, as it could possibly make sudden steam-driven or phreatic explosions, volcanic earthquakes, minor ashfall, and accumulations or expulsions of volcanic gas.

It also said pilots must avoid flying close to Taal Volcano as ash and ballistic fragments from sudden explosions may be hazardous to aircraft.