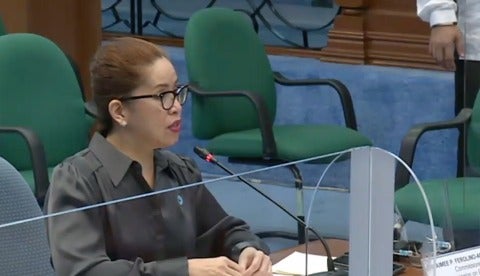 Comelec Commissioner Aimee Ferolino-Ampoloquio during her confirmation hearing with the Commission on Appointments (CA) at the Senate, Wednesday, Mar. 24, 2021. Screengrab from CA Youtube livestream

MANILA, Philippines — The powerful Commission on Appointments (CA) on Wednesday confirmed the ad interim appointment of Aimee Ferolino-Ampoloquio as commissioner of the Commission on Election (Comelec).

Before the CA’s plenary session, the body’s Committee on Constitutional Commissions and Offices deliberated on and recommended the approval of President Rodrigo Duterte’s most recent appointee to the poll body.

During the hearing of the CA panel earlier in the day, Ferolino-Ampoloquio was quizzed on updates regarding the voter registration for the 2022 polls, her views on the proposed hybrid elections and what laws she thinks should be passed to improve Comelec’s policies.

She cited the need to reform the country’s campaign rules, which she said should be “more defined.”

The Comelec official also said the campaign expenditure limit should be increased.

“We need some laws on premature campaigning. The present one has several loopholes,” she added.

Ferolino-Ampoloquio, who first joined Comelec as an emergency laborer in 1994 and became an election assistant for 12 years, was appointed by Duterte as Comelec commissioner on Nov. 26 last year.

“As commissioner, Atty. Aimee commits to devote her life giving back to the public the gift of wisdom and experience derived from her 26 years of loyal and dedicated service in this constitutional body by continuing, among others, the mandate of [Comelec] for free, honest, orderly conduct of elections and other electoral exercises,” Senator Cynthia Villar, chairperson of the CA panel, said in recommending Ferolino-Ampoloquio’s ad interim appointment to the plenary.

Ferolino-Ampoloquio’s term as Comelec commissioner will expire on Feb. 22, 2027, according to Villar.