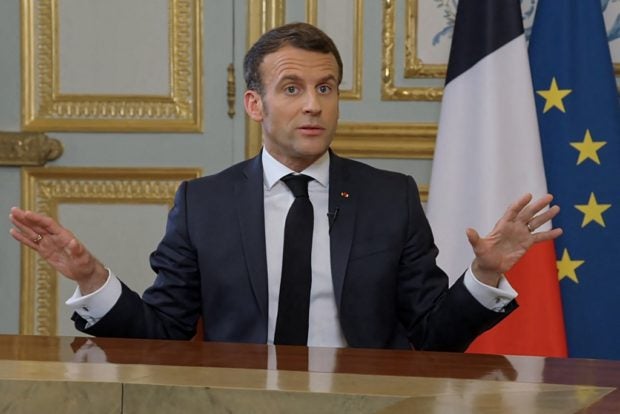 French President Emmanuel Macron gives an interview at the Elysee Palace in Paris on March 23, 2021 to the show “C Dans l’Air” on the French tv channel France 5 ahead of the broadcast of a documentary on France’s diplomatic relations with Turkey. (Photo by – / France 5 / AFP)

Macron told France 5 television that he had noted President Recep Tayyip Erdogan wanted to improve relations, which have been battered by disputes over the conflicts on Libya, Syria and Nagorno-Karabakh, and Turkish accusations of Islamophobia in France.

But while Macron insisted that Europe would never turn its back on Turkey, he said that improving ties would be difficult unless Ankara’s behavior changed.

“There will be attempts at interference in the next (French) presidential elections” in 2022, Macron said, ahead of the vote in which he is expected to seek a second mandate, he said.

“I consider this to be unacceptable. It’s written down — the threats are not veiled.”

Macron said such interference would take the form of “playing on public opinion” and lashed out at Turkey for distorting his comments on Islam last October after a spate of attacks in France by extremists.

“Very clearly last autumn there was a politics of lies,” he said.

“Lies of the state, lies spread by media controlled by the Turkish state, spread by certain large channels controlled by Qatar,” he said, a reference to Doha-based broadcaster Al-Jazeera.

Macron said he had also raised this with Qatar’s Emir Tamim bin Hamad al-Thani, a close ally of Erdogan.

“My comments were falsified and France was presented as a country with a problem with Islam,” he said.

The relationship between Macron and Erdogan hit a low last year when the Turkish leader said his French counterpart needed “mental checks” as tensions rose over a new French law clamping down on radical Islam.

Erdogan in December then expressed hope that France would “get rid of” Macron as soon as possible, describing the president as “trouble” for the country.

The Turkish leader has taken a softer tone towards France and the EU this year, but Macron indicated much more was needed.

“I have noted since the start of the year a desire by President Erdogan to re-engage. I want to believe that this path is possible,” he said.

Macron insisted that France would never give in to “blackmail” but acknowledged Europe had to work with Ankara on migration policy, with Turkey hosting millions of Syrian refugees.

“If one day we say we are not working and discussing with them any more, they will open their doors and you will have three million Syrian refugees in Europe,” he said.

The French president reaffirmed his belief that “we need to clarify” the behavior of Turkey within NATO, and was particularly critical of its actions in the conflict in Libya.

“Turkey did not keep its word, it sent foreign fighters, it sent its army (into Libya). I am applying a lot of pressure so that we now have a withdrawal,” he said.