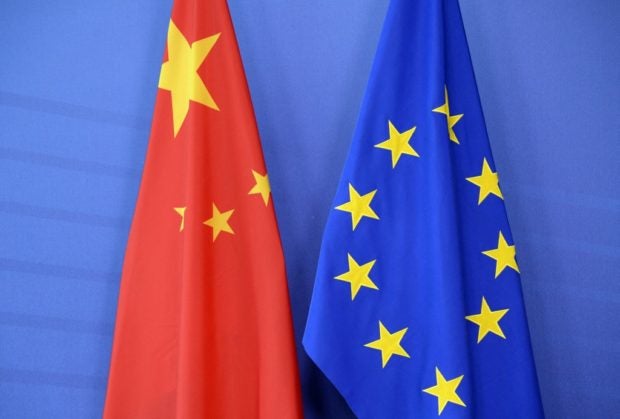 (FILES) This file photograph taken on June 29, 2015, shows China’s flag (L) beside the European Union (EU) flag during an EU-China Summit at the European Union Commission headquarters in Brussels. China bristled March 23, 2021, after western nations lined up to impose sanctions over its crackdown on Uyghur Muslims in Xinjiang, the first concerted international action against Beijing since Joe Biden took office. On March 22, the EU, Britain and Canada blacklisted four former and current officials in the Xinjiang region, while Washington, which had already sanctioned two of those officials in July 2020, added the other pair to the list. (Photo by THIERRY CHARLIER / AFP)

PARIS — France, Germany and other EU nations called in Chinese ambassadors on Tuesday to protest at sanctions imposed by Beijing targeting their citizens, as China and Europe faced off over claims of rights abuses against China’s Muslim Uighur minority.

France also rebuked the Chinese envoy for “unacceptable” behavior after he posted a series of tweets targeting French lawmakers and a researcher.

The diplomatic spat erupted after the EU, Britain and Canada on Monday blacklisted four former and current officials in the Xinjiang region, while Washington, which had already sanctioned two of those officials in July 2020, extended them to the two others.

The tensions come as the EU seeks to formulate a strategy on China at a time when tensions between Beijing and Washington are emerging as the world’s number one geopolitical issue.

The European Union and China had in December approved “in principle” a major investment pact that Brussels hopes will open up lucrative opportunities despite concerns on human rights.

China has angrily rejected the claims of a crackdown against the Uighurs, and responded with entry bans on 10 Europeans — including five members of the European Parliament — as well as two EU bodies and two think-tanks.

In France, China’s ambassador Lu Shaye took aim at French lawmakers hoping to visit Taiwan, which is claimed by Beijing, as well as Antoine Bondaz, a China specialist at the Foundation for Strategic Research (FRS) think-tank.

In Twitter posts, Lu derided Bondaz as a “little thug,” a “crazed hyena” and “ideological troll” with “anti-Chinese” stances after Bondaz complained about Chinese pressure on French lawmakers hoping to visit Taiwan.

“The embassy’s methods, and the tone of its public comments, were completely unacceptable and exceeded all the limits commonly accepted by any embassy in the world,” a French foreign ministry official, who asked not to be named, said after Lu appeared Tuesday.

The summons had been issued Monday, but in a breach of standard diplomatic protocol, it took some time for Lu to comply with the demand.

Europe Minister Clement Beaune said earlier Tuesday that Lu had snubbed the initial request for talks, with the Chinese embassy in Paris citing “scheduling issues” in a Twitter post.

“Neither France nor Europe is a doormat,” Beaune warned on France Info radio. “When you are summoned as an ambassador, you pay a visit to the foreign ministry.”

Germany, a key EU proponent of strong ties with Beijing, called in China’s ambassador Wu Ken for “urgent talks” at the foreign ministry.

The envoy was told “that China’s sanctions against European MPs, scientists and political institutions as well as non-governmental organizations represent an inappropriate escalation that unnecessarily strains ties between the EU and China,” the ministry said.

Italy summoned the Chinese ambassador to a meeting on Wednesday, the Italian foreign ministry said.

In Brussels, a Belgian government source said China’s ambassador was expected to attend a meeting later Tuesday over the sanctions against lawmaker Samuel Cogolati, who proposed a motion in parliament to describe the crackdown on the Uighurs as a “genocide”.

Rights groups believe at least one million Uighurs and other mostly Muslim minorities have been incarcerated in camps in the northwestern region, where authorities are also accused of forcibly sterilizing women and imposing forced labor.

China has strongly denied allegations of forced labor involving Uighurs in Xinjiang and says training programs, work schemes and better education have helped stamp out extremism in the region.

But Beijing has repeatedly faced accusations of committing genocide from activists, some legislatures and also most notably former US secretary of state Mike Pompeo.

Lithuania’s foreign ministry also summoned Beijing’s envoy since one of its lawmakers was targeted by the sanctions imposed in response to “blatant” abuses.

“China was urged to address the human rights violations instead of imposing countermeasures,” it said in a statement.

And in Copenhagen, China’s ambassador Feng Tie was summoned to appear at the foreign ministry after Beijing sanctioned Alliance of Democracies, a non-profit founded by Denmark’s former premier and ex-NATO chief Anders Fogh Rasmussen.

Similar action was taken in Sweden, with Swedish researcher Bjorn Jerden among those sanctioned.