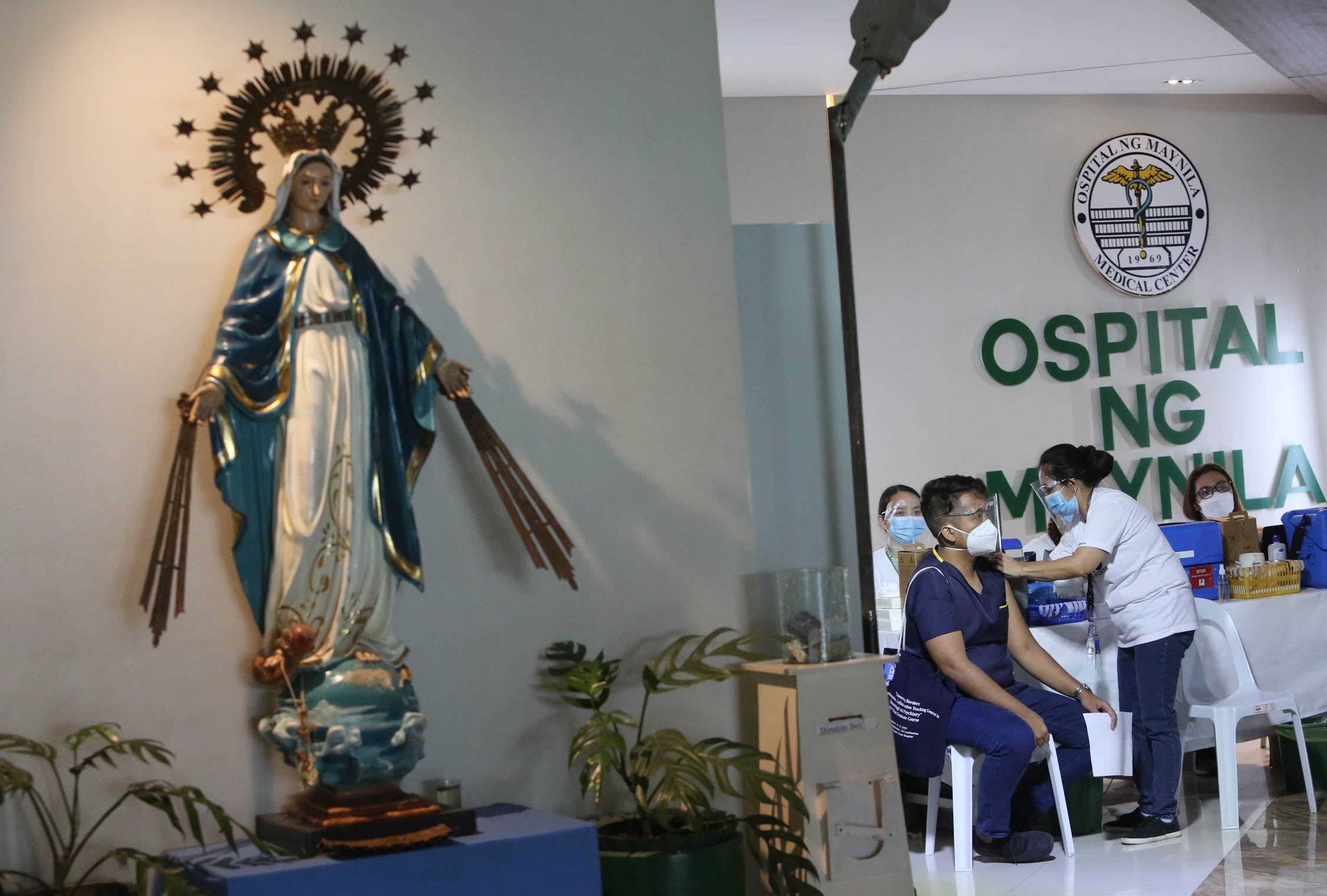 GET A SHOT AND PRAY A health worker gets inoculated against COVID-19 at Ospital ng Maynila on Tuesday. He cannot get indemnity from the government if he suffers from adverse side effects because the state cannot assume responsibility for willful misconduct and gross negligence of the vaccine makers, according to President Duterte. —MARIANNE BERMUDEZ

Lawmakers were baffled by President Duterte’s remark suggesting it was illegal for the government to assume liability for adverse side effects from coronavirus vaccines under a new law he himself had endorsed to Congress and signed last month.

“Unbelievable,” Senate Minority Leader Franklin Drilon said on Tuesday, noting that it was Health Secretary Francisco Duque III and Secretary Carlito Galvez Jr., head of the National Task Force Against COVID-19, who had proposed the indemnity clause in Republic Act No. 11525, or the COVID-19 Vaccination Program Act of 2021.

“Duterte certified the law as urgent. We passed it. He signed it. There is a law,” Drilon said in a text message.

Sen. Juan Edgardo Angara, chief of the Senate finance committee, noted that the original wording of the indemnity or no-fault clause had come from the government’s COVID-19 task force and Cabinet officials who had learned about the requirement during negotiations with vaccine manufacturers.

“In fact, the Senate amended the wording to make sure no one would be excused from gross negligence, which protects the people and the government,” Angara told the Inquirer.

The new law provides for a P500 million fund “to compensate any person inoculated through the COVID-19 Vaccination Program, in case of death, permanent disability or hospital confinement for any [serious adverse effects].”

Last month, Galvez told the Senate that the indemnity clause was a requirement set by the vaccine manufacturers as well as the COVAX vaccine pool, without which no agreement for supplies of COVID-19 vaccines could be signed.

On Feb. 18, Mr. Duterte certified the bill as urgent, allowing the two houses of Congress to pass the measure expeditiously. The Senate version was approved on Feb. 23 and adopted by the House shortly afterward. The President then signed it into law on Feb. 26.

But in a televised address on Monday night, the President said there was a “big loophole” in the government’s assumption of liability for vaccine side effects.

‘We cannot allow it’

“There’s a big loophole there, actually, on assumption of liability. No, we cannot allow it. Tell them sorry because Rody said he will not pay because we are not allowed to sign any agreement to that effect,” Mr. Duterte said.

Mr. Duterte questioned the government’s assumption of liability after Galvez, in a meeting with the President, said the government signed an indemnification clause in the contracts for vaccine procurement to free the manufacturers from liability in case of adverse effects, as the vaccines were still under clinical trial.

Galvez said the responsibility for adverse effects could not be delegated to the private sector or the local governments.

Mr. Duterte said the government could not free anybody from liability or guarantee immunity.

“I do not think that will be legal. Tell them it’s illegal for us to do that. Only Congress could do that, no one else,” the President said.

His remarks gave rise to worries about the fate of vaccine agreements that the government had already signed.

Sen. Imee Marcos, a principal author of the bill and head of the Senate economic affairs panel, on Tuesday said Mr. Duterte might have meant total exemption from suit.

“The President may have been referring to the call for ‘blanket immunity’ of some vaccine manufacturers that is clearly contrary to law and public policy,” she told reporters.

“The vaccination law passed recently by Congress and signed by President Duterte on Feb. 26 set[s] limits on exemption or immunity from suit,” she said.

“Nevertheless, any person who has been vaccinated may file suit if they suffer any bodily injury that may result from misconduct or neglect on the part of the vaccine manufacturer. No individual shall be denied the right to sue,” Marcos said in Filipino.

In a statement, Zarate said it was the government that insisted on tripartite agreements with private companies and local governments for the purchase of COVID-19 vaccines.

He said such agreements were “unique” to the Philippines, as vaccine makers would not close deals with Philippine companies and local governments without the government taking responsibility for indemnity.

ACT Teachers Rep. France Castro said the President seemed “to have forgotten about the law that he himself had signed.”

“The President’s sudden refusal to pay indemnity for adverse effects of vaccines and even the rejection of tripartite agreements between private [companies] and local governments [show] that the Duterte administration has no clear and concrete vaccination plan for the country,” Castro said.

Presidential spokesperson Harry Roque said the President was referring to the provision in the vaccination law stating that those involved in the inoculation program would not be immune from suit or liability if there was willful misconduct and gross negligence.

Roque told a news briefing that Mr. Duterte was aware of that provision.

“He knows about that. He just said he would not allow the private sector to be free of liability if there is gross negligence and willful neglect,” Roque said. —WITH REPORTS FROM LEILA B. SALAVERRIA AND JULIE M. AURELIO