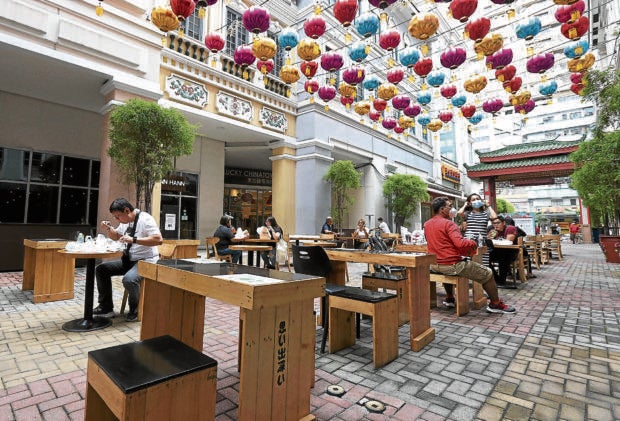 AL FRESCO DINING Several patrons of a shopping mall in Binondo, Manila, eat lunch in an outdoor space to follow a government task force guideline limiting restaurants, cafes and other food establishments to open-air dining, takeouts and deliveries as a precaution, as COVID-19 cases are rising, especially in Metro Manila and four nearby provinces.—MARIANNE BERMUDEZ

MANILA, Philippines — The government hopes to reduce the country’s COVID-19 cases by at least 25 percent while keeping the economy afloat during the next two weeks, when strict curbs on movement are in place in Metro Manila and surrounding provinces, Malacañang said on Monday.

“This is a minimum goal, we’re aiming for more. We’re hoping that since [it’s] Holy Week nobody [will] leave Metro Manila and everybody [will] stay at home,” Roque told a news briefing.

The government has expanded the general community quarantine in Metro Manila to Bulacan, Cavite, Laguna and Rizal, setting up checkpoints at the borders to stop unnecessary interprovincial travel, imposing age restriction on movement, and prohibiting mass gatherings in a bid to stem a surge in coronavirus infections that is threatening to overwhelm the health-care system.

The curbs will be in place up to April 4.

Speaking at Roque’s briefing on Monday, Benhur Abalos, chief of the Metropolitan Manila Development Authority, said the mayors were concentrating on testing, contact tracing, isolating infected residents and extending aid to residents in 91 places in the metropolis that had been on targeted lockdown since last week.

Roque said that even if the government was restricting movement, it was keeping the economy open to allow people to work.

And since people are still earning, he said, there is no need for the government to distribute cash aid, as it did when it placed most of the country on enhanced community quarantine, or hard lockdown, last year.

But local governments that have imposed targeted lockdowns can provide assistance to residents in the shuttered areas, he said.

While a wider lockdown remains an option, there is a need to keep the economy open to prevent hunger, he said.

“[W]e recognize that there [will be] hunger if we shut down the economy. So we restrict [movement] but we allow everybody to work,” he said.

Roque clarified that gyms and fitness centers may operate at 75 percent capacity in Metro Manila and the four nearby provinces unless the local governments suspend their operations.

Personal care services, including spas, may operate at 50 percent capacity, he said.

The government encourages food takeout and delivery, he added.

The Department of Agriculture and the Department of the Interior and Local Government (DILG) assured Filipinos on Monday that the delivery of food supplies and other basic goods will not be hampered despite the restrictions on movement.

Speaking for the DILG, Undersecretary Jonathan Malaya said the police had been instructed to allow the movement of essential workers and vehicles through the checkpoints.

Agriculture department spokesperson Noel Reyes said the agency would not issue food passes this time, as there were only about 20 checkpoints—unlike last year when even barangays set up their own checkpoints.

Reyes said government agencies were working together to avoid snags in the delivery of food and raw materials for food production.

Lt. Gen. Guillermo Eleazar, Philippine National Police officer in charge, told the briefing that only people authorized to go out were allowed to pass the checkpoints.

“[The requirement to pass through] is just one identification card,” Eleazar said.

Outbound tourists and leisure travelers are not allowed to pass, he said.

There are no restrictions to movement within areas on quarantine, Eleazar said. Only people crossing borders are being checked, he added.

But the police and the local governments are under strict orders not to allow mass gatherings, DILG officer in charge Bernardo Florece Jr. said in a statement on Monday.

“We need to be strict because of the surge in [coronavirus cases,],” Florece said. “Mass gatherings put the people, their families and communities at risk of contracting the virus. They can become superspreader events.”

The government imposed the latest round of restrictions as COVID-19 cases in the country soared to record highs in recent days and topped 8,000 on Monday.

He said he did not want to assign blame for these, and added that the government was dealing with the crisis.

“The lesson for everybody is just because we have brought down cases does not mean we will relax our caution,” he said.

The increase in cases has also led to more hospitalizations, and 70 percent of intensive-care beds in Metro Manila are occupied, he said.

The Department of Health (DOH) would increase the number of health workers in hospitals handling COVID-19 cases, Roque said.

“We will get health workers from areas near Metro Manila to relieve those working in the hospitals who have become fatigued,” he said.

He also said areas with high numbers of COVID-19 cases would be given priority in the national vaccination drive.

There are sectoral priorities where health-care workers are on top, and geographic priorities that focus on epicenters of COVID-19, he said.

Edsel Salvana, a member of the DOH Technical Advisory Group, said there was “most likely” community transmission of the coronavirus variants though he was unsure if this was sustained.

The public should act as if there is community transmission of the new variants, he said.

“It’s more important that we overcompensate rather than undercompensate. For us, it’s more of an academic exercise whether there’s a community transmission or not. The important action point is really to act like it’s there and we need to keep it low, because we know that if the variant becomes dominant, the infection rate [will] increase and mortality [will also] increase,” he said.

According to Salvana, there is community transmission if the clusters of cases cannot be traced.

A lot of the clusters, especially those of the South Africa variant, can still be traced, but this is after sequencing, he said.