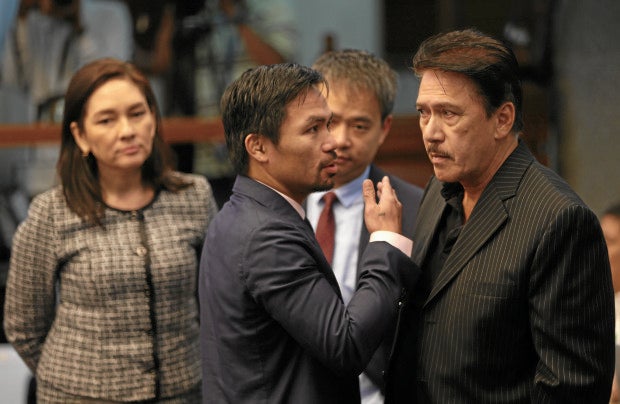 MANILA, Philippines — Another colleague of Senator Manny Pacquiao has divulged the boxer-turned-politician’s “interest” to run for president in the 2022 polls.

Senate President Vicente Sotto III said Pacquiao talked to him “some time ago” regarding the world boxing champion’s plans for next year’s national elections.

(Some time ago, we were able to talk, he mentioned he is interested in running for the presidency.)

Pacquiao approached Sotto on the matter once before the pandemic and then another time during the pandemic, according to the Senate leader.

Before Sotto came out with this information, Senator Panfilo Lacson has recalled a similar conversation with Pacquiao. Lacson said Pacquiao approached him several times regarding the matter.

“This was late last year…He’s quite open about it. Although, ayaw niyang pagusapan because of COVID and in fairness to him, consistent naman siya na COVID muna tayo, ‘wag na muna ‘yong pulitika,” Lacson said in a television interview last week.

(This was late last year…He’s quite open about it. Although, he does not want to talk about politics because of COVID, and in fairness to him, he’s consistent about what he said that politics should not be discussed right now.)

Sought for comment on Lacson’s disclosure, Pacquiao did not confirm nor deny his plans for 2022 and instead stressed that the presidency is a “God-given destiny.”

The world-famous prizefighter, in several instances, has said that politics should be set aside for now as the country continues to battle a pandemic.