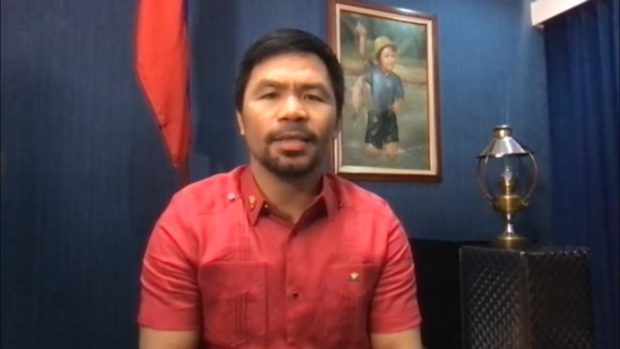 Senator Manny Pacquiao sent reporters a video statement saying that being a president is a “God given destiny.”

MANILA, Philippines — Senator Manny Pacquiao still won’t confirm nor deny his supposed plan to run for the presidency in the 2022 national elections but said that being the highest official in the country is a “God-given destiny.”

(Being president is a God-given destiny. Many have dreamt of it but many have failed. But what I want is for our next president to have genuine compassion and love for the Filipino people.)

(Let’s stop with political colors, no more yellow, no more red, no more orange or whatever color you support. Have mercy on Filipinos.)

Pacquiao issued his video statement when his comment was sought on Senator Panfilo Lacson’s disclosure that the boxer-turned-politician has approached him several times regarding his intention to join the presidential race in the 2022 polls.

According to Lacson, Pacquiao was “quite open” about his plans for the upcoming elections.

“Sinabi naman niya. He’s quite open about it. Although, ayaw niyang pagusapan because of COVID and in fairness to him, consistent naman siya na COVID muna tayo, ‘wag na muna ‘yong pulitika,” Lacson said in an interview over ABS-CBN News Channel.

(That’s what he said. He’s quite open about it. Although, he really does not want to talk about it because of COVID and in fairness to him, he’s consistent in focusing on COVID and not on politics.)