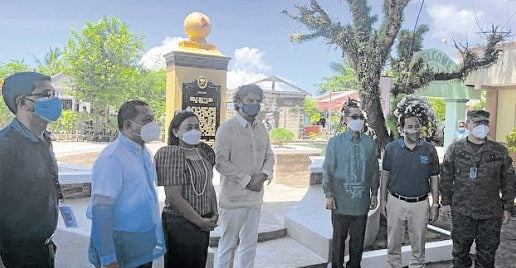 RETRACING MAGELLAN ROUTE Officials led by Spanish Ambassador Jorge Moragas Sanchez, Guiuan Mayor Annaliza Kwan and Defense Undersecretary Reynaldo Mapagu witness the unveiling on March 18 of one of the 34 markers commemorating the 1521 arrival of Ferdinand Magellan in what would
later be known as the Philippine archipelago under Spanish colonial rule. —CONTRIBUTED PHOTO

GUIUAN, Eastern Samar, Philippines — With its playful lines and comic delivery, it helped bring the “story” of Portuguese explorer Ferdinand Magellan from the history books to modern-day radio playlists.

But it looks like “Magellan”, the novelty song released in 1972 by Boholano singer and songwriter Roman “Yoyoy” Villame, got some of its lyrics a little off the mark if checked against more recently agreed-upon facts and perspectives.

The realization became a source of mirth in an otherwise formal gathering held in this town earlier this week to commemorate the quincentennial of Magellan’s arrival on an island that would soon be considered part of the Philippine archipelago under Spanish colonial rule.

The Villame song, for example, spoke of the Philippines being “discovered” by the famed navigator on ”March 16, 1521”.

But in a video posted on social media in time for the commemoration, the National Quincentennial Committee pointed out that to use the term “discovery” would be to take the point of the view of the European explorers.

It stressed that there was already a thriving civilization in the islands, with the natives engaged in robust trade with foreigners from neighboring territories, long before the arrival of the Magellan’s Armada de Maluco that sailed from Spain in search of a new trade route to the Spice Islands.

And contrary to another “Magellan” verse, the expedition first landed on the island of Homonhon — not Limasawa — which is now part of Guiuan town at the southern tip of Eastern Samar province.

Magellan and his sick, hungry and dehydrated crew arrived on Homonhon on March 17 — not 16, as stated in the song — according to the NQC video.

There they rested and helped themselves to fresh water and fruits, a day after anchoring off the neighboring island of Suluan.

During Thursday’s unveiling of a marker officially recognizing Suluan’s place in the Magellan expedition, not a few guests realized, with a little smile, how one of the most beloved Villame songs that has entertained a generation turned out to be inaccurate.

But it’s just a song, after all, one that will surely amuse the next generation of listeners who will “discover” Villame’s melodic wit and Pinoy humor.

For the more serious scholars, however, there’s is the Suluan episode of the Magellan narrative to be explored.

As described by the expedition’s Italian chronicler Antonio Pigafetta, Homonhon was uninhabited when Magellan and his multiracial crew set foot on it — but they were met there by natives coming from nearby Suluan.

Pigafetta said the natives, who were led by an unnamed rajah and sported tattoos and golden ornaments, offered food, water and friendship to the strangers. “Those people became very familiar with us. They told us many things… We took great pleasure with them, for they were very pleasant,” the chronicler wrote.

This first contact is now being considered the beginning of the relationship between Spain and a race who would later be called Filipinos.

In a speech during Thursday’s program, Eastern Samar Gov. Ben P. Evardone said that without this ”great act of humanity” by the Suluan inhabitants of that period, “Magellan’s bid to become the first to circumnavigate the globe would have ended right there and then.”

“Our ancestors acted with magnanimity and compassion notwithstanding race, creed or language barrier,” Evardone said. “They restored our faith in humanity.”

For Rene Escalante, chair of the National Historical Commission of the Philippines, what the Suluanons did was ”typically Filipino,” a gesture of “pakikisama (fellowship)” worth celebrating even after 500 years.

“Unfortunately, a lot of Filipinos, as well as foreign nationals, do not know this episode in the history of the first circumnavigation of the world,” Escalante said.

He said the newly unveiled Suluan marker — one of the 34 being installed by the NHCP in line with the quincentennial — could serve as a “perpetual reminder” of the generosity displayed by the Suluanons that allowed Magellan and his crew to continue their journey and reach what is now Cebu.