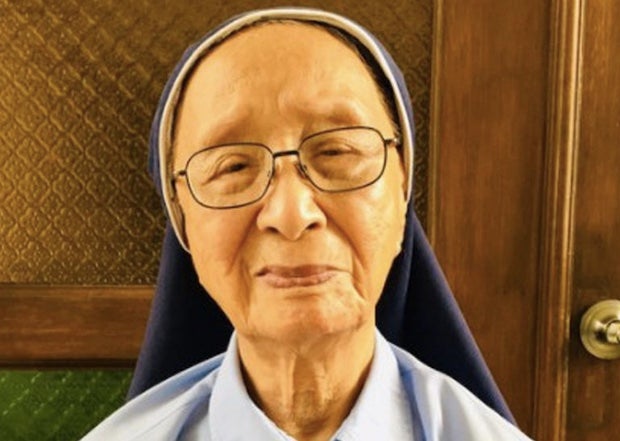 Sr. Fidelis Atienza (Photo from the Relgious of the Good Shepherd)

MANILA, Philippines — Sr. Fidelis Atienza of the Religious of the Good Shepherd (RGS) Community died, after 66 years of religious life, at the age of 102 in Quezon City, CBCP News reported on its website on Saturday.

Tourists with a sweet tooth would no doubt be familiar with the ube jam sold by her congregation there.

“She was the original mastermind behind the ube jam, enabling the congregation to send thousands of youths to school,” the RGS was quoted by CBCP News saying.

She introduced the jam in 1976, but before that, in the 1960s, she started the Marian Bakery, which offered “crispies” made from communion host cuttings, the forerunner of  “angel cookies,” according to the RGS.

She went on to have various ministries, including dozens of community apostolates in Baguio, Cebu, Quezon City, Tagaytay, Hong Kong, Rome, and France.

She spent most of her life in Maryridge, a retreat house in Tagaytay, where she counseled thousands of people.

In 2020, few months after her 100th birthday, she was transferred to the Good Shepherd Community in Quezon City.

“The children in the compound were very fond of their oldest playmate; she was a delight and a source of joy to everyone whom she met,” the RGS said.

Even in the last years of her life, she never considered herself infirm, according to her congregations.

“Her hands were never weary, she would be seen cutting and collecting plastic wastes and turning them into eco-bricks until her shoulders ache from using scissors,” the RGS said.

Her remains will be taken to the chapel of the Good Shepherd Convent on Aurora Boulevard in Quezon City.

The wake and services would be condcuted privately.

Inurnment will be at Good Shepherd Columbary, also in Quezon City, at a date to be announced later.

From purple to white: Farmers struggle to grow ube due to ‘changing climate’

Before there was social enterprise, there was Mountain Maid