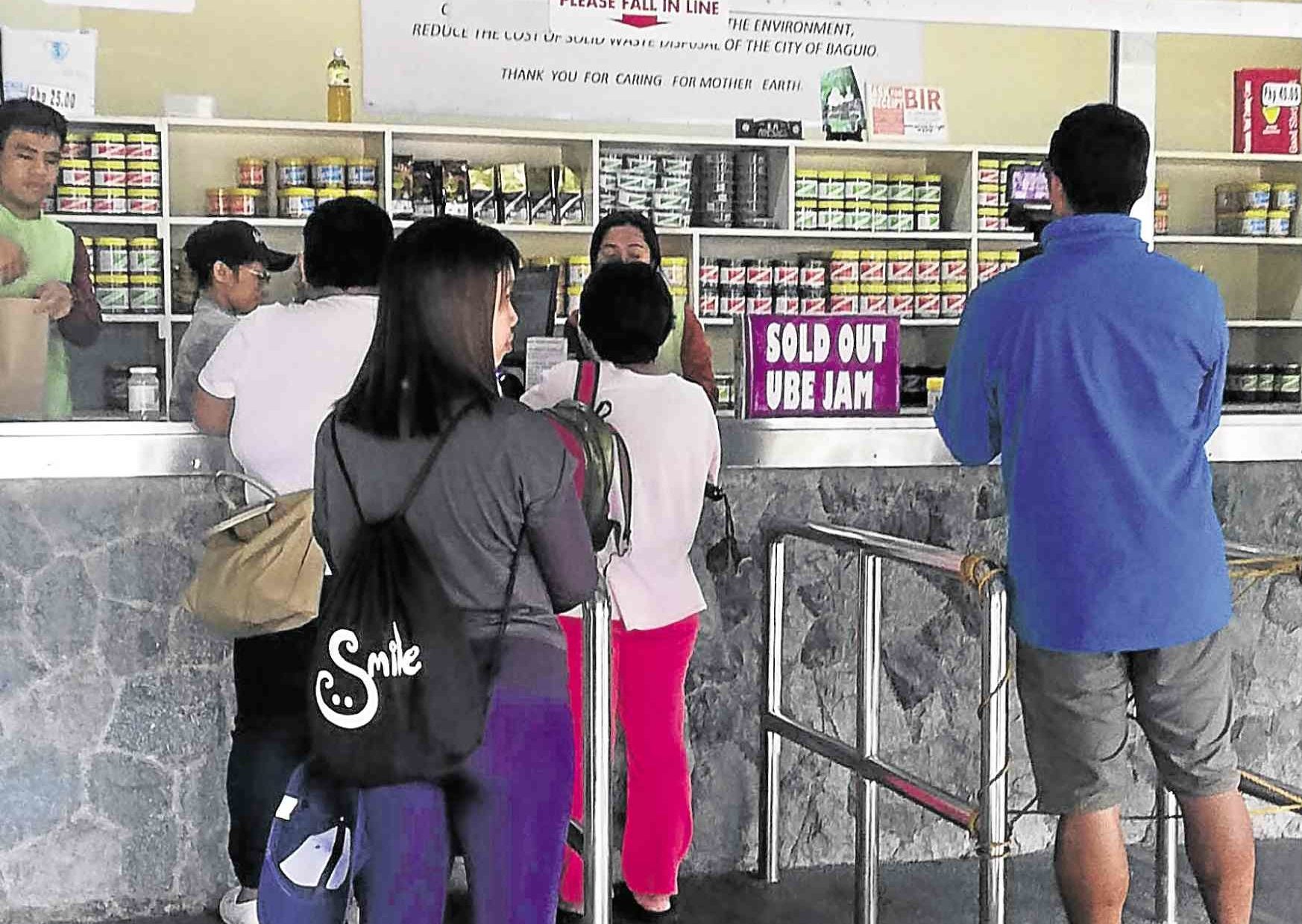 BESTSELLER People line up at the Good Shepherd Convent store in Baguio City for their favorite food souvenirs, only to find “ube,” the popular purple yam bottled dessert, sold out. The bestselling sweet has been missing from the store’s shelves since August because of the scarcity of the crop, said to be a casualty of climate change. —VICTOR PEDRASA/CONTRIBUTOR

BAGUIO CITY—The famous purple yam jam (“ube”) will soon be back on the shelves of the Good Shepherd Convent store here after almost two months’ shortage.

Sister Guadalupe Bautista, product developer at the convent, on Friday said that farmers from Emilio, Ilocos Sur, delivered on Thursday a ton of the purple tuber traditionally made into the popular bottled dessert.

“We will store the (newly) delivered purple yams for now. These will not go stale unless these are cooked and turned into jam,” Bautista told the Inquirer in a text message.

She said farmers were paid P45 for each kilogram of yam delivered to the convent.

In a post on Facebook on Sept. 23, the Religious of the Good Shepherd (RGS) congregation served notice about the supply shortage of the purple yam from the Cordillera region.

Wait for a month

“Due to changing climate, our ube farmers are having difficulty growing ube,” the post said, adding that the RGS was instead selling the yam’s white variety, which tastes “as good.”

Bautista said the El Niño phenomenon had dried up the ube vines and stunted their growth.

But even with the fresh delivery of the purple yam, Bautista said the congregation will only start selling the purple dessert after the remaining 13 tons of the white yam are sold out. This may take more than a month.

According to Cameron Odsey, the Department of Agriculture-Cordillera director, the ube shortage was caused by the limited number of quality seeds. Few farmers produce ube seeds because these are susceptible to pest and disease, he said.

In its Facebook post on Monday, RGS said it had been a “struggle in recent years to find a stable supply (of the purple yam). And in the past weeks there [was] none.”

Leonila Yagyagan, who works at the congregation’s store, said the store didn’t have jam—purple or white—for more than a month since Aug. 2.

Although July to September is off season for purple yam, this was the first time that RGS faced a shortage of this scale, Yagyagan said.

Last year, she said, the Good Shepherd Convent produced white jam together with the usual purple jam to introduce a new product.

But this year, the convent was forced to make only white jam because of the ube shortage, Yagyagan said.

At P230 per 440 gram bottle, the white jam is costlier than the purple jam, which usually goes for P210.

The convent also makes peanut brittle, blueberry jam, orange marmalade, pickled chayote and 40 other products, whose proceeds support the college education of students from the Cordillera. The students undergo livelihood training and help out in the food production.

Read Next
Only 1 out of 10 sexually active Filipinos uses protection–survey
EDITORS' PICK
BAP: PH banks can withstand ABSCBN shutdown
World-standard accounting: Unlocking your financial potential
Early to tell if PH has reached ‘peak’ of COVID-19 outbreak — WHO exec
Water remains our saving grace right now
Defend Your Health! Shop health essentials from home with Rose Pharmacy’s Online Sale
DTI: Restaurants’ dine-in capacity to further expand, LGUs encouraged to move curfew time
MOST READ
Enchong Dee to Harry Roque for saying ‘move on’ from ABS-CBN shutdown: ‘You disgust me’
US rejects nearly all Chinese claims in South China Sea
Defensor: ‘No problem’ with daughter expressing support for ABS-CBN
‘I am not my father,’ says daughter of lawmaker who voted to deny ABS-CBN franchise
Don't miss out on the latest news and information.