Deforestation in the Sierra Madre in northern Luzon has canceled out the gains of the National Greening Program (NGP), according to scientists who observed satellite data in the past two decades to assess the results of the government’s massive reforestation project.

Scientists from the University of the Philippines (UP) and the National Aeronautics and Space Administration (Nasa) in the United States said continued forest loss amid reforestation efforts highlighted the urgency to implement environmental laws as well as the greater need to protect and conserve the country’s remaining forests.

The forest cover in the Philippines has been reduced to less than 10 percent of the original, due to widespread logging and other threats to forest ecosystems.

The scientists’ study, published in the journal Forests, is the first peer-reviewed paper that assessed the success of the NGP, which was aimed at planting 1.5 billion trees in 1.5 million hectares of land from 2011 to 2016, and creating jobs to address poverty.

Analysis of satellite data of the Sierra Madre, the country’s longest mountain range where half of the remaining old-growth forest is located, showed that while forest loss declined from 2011 to 2015, it increased from 2016 to 2018, resulting in “no significant gain” from the NGP.

“While there is an effort to reforest, we saw that deforestation continues and its rate is higher,” Dr. Gay Jane Perez, one of the study’s authors and the deputy director of the UP Institute for Environmental Science and Meteorology, said in an interview. “Hence, it sort of cancels [the reforestation] out.”

Using satellite data, scientists saw a modest increase in forest loss in 2009 and 2010, followed by a decreasing trend that reached a record low in 2014 at 553 ha in closed forest and 1,246 ha in open forest.

A closed forest is an undisturbed area of the forest; an open forest is accessible to humans and may have roads and communities within it.

The study’s authors said the decline in forest loss occurred concurrently with the beginning of the NGP, indicating public support and awareness of the reforestation project. But in the last year of the program’s first phase in 2016, the losses suddenly increased to 1,795 ha for closed forest and 3,862 ha for open forest.

The losses in tree cover were even higher in 2017 and 2018, and the rate of losses in closed forest was also higher than in open forest, the scientists said. 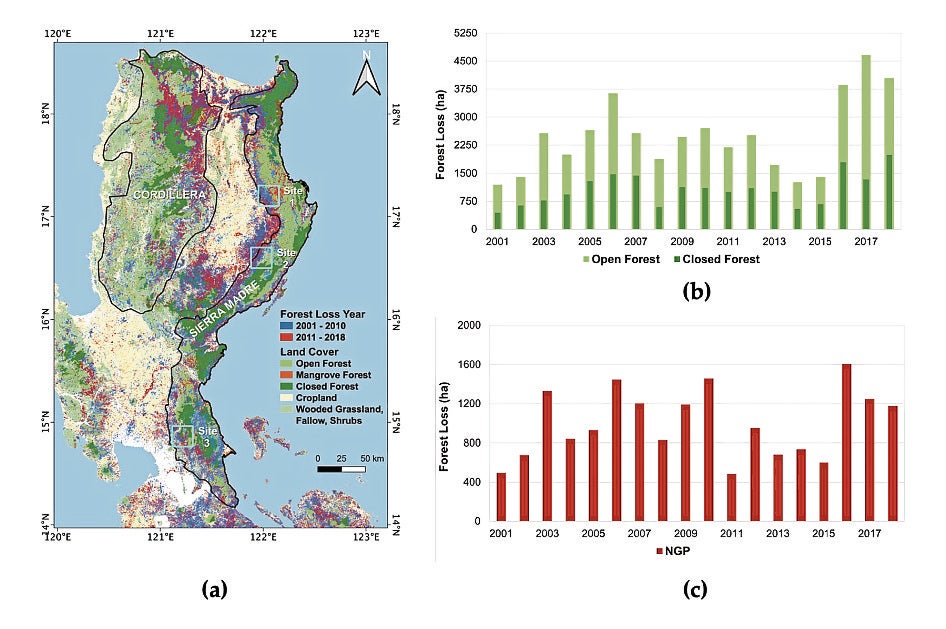 DISMAYING DATA A map of northern Luzon, showing the locations of different land cover types as classified by the National Mapping and Resource Information Authority, highlights forest losses from 2001 to 2010 and from 2011 to 2018. These areas were identified using data from high-resolution global maps from Hansen et al. Data analyzed by scientists also showed the continuous forest loss in both closed and open forests in the Sierra Madre, as well as forest loss in the sites identified for reforestation under the National Greening Program. —MAPS AND CHARTS FROM THE FORESTS JOURNAL

“These results are disturbing since the goal of a very visible program like [the] NGP that is intended to do reforestation were being negated concurrently by deforestation activities that are likely illegal and executed by unscrupulous entrepreneurs and other entities,” they said.

While the scientists did not examine the drivers of deforestation, satellite data implied that it was being done by both “low-budget operators or farmers” with relatively small-scale activities and large-scale operators that concentrate their activities in specific sections of the forest.

Monitoring of NGP sites using satellite images also showed the varying conditions of the areas: During the reforestation years, some areas became greener while others became barren.

Scientists raised the need to continuously monitor the seedlings being planted under the NGP to ensure their growth and survival, especially with the program’s expansion to the Enhanced NGP, which is aimed at rehabilitating over 7 million ha of forestland up to 2028.

“I think the NGP is an excellent program, but the problem is in its implementation,” said Dr. Josefino Comiso, a senior scientist at Nasa and also a study author. “When you plant trees, you make sure that these grow up and not die in the process. And it’s very important that deforestation issues are addressed.”

Perez said more efforts should also be exerted in conserving areas identified as protected areas under the law.

“Even if you are doing reforestation efforts to offset what you have cut before, what you have lost previously may not really be recovered anymore,” she said. “Especially if you look at old-growth forests, maybe we are taking down trees that are … hundreds of years old, and you cannot just replace [them] with a new seedling.”

Sought for comment, the Department of Environment and Natural Resources’ (DENR) Forest Management Bureau said it would inspect and evaluate the identified planting sites.

DENR Assistant Secretary Marcial Amaro, who heads the bureau, said natural disasters such as typhoons, landslides and droughts, as well as land conversion, presence of pests and diseases and forest fires may be behind the deforestation in some areas.

“The department intensified its forest protection and anti-illegal logging campaign through the Lawin Forest and Biodiversity Protection System,” Amaro said in a letter to the Inquirer, adding that drones and remote sensing were also being used to monitor and evaluate the established NGP areas.

Per a report by the Commission on Audit in 2020, the NGP missed 88 percent of its target within the years 2011 to 2019. State auditors said that after eight years of implementation, the forest cover increased by only 177,441 ha, way below the program’s target of 1.5 million ha.