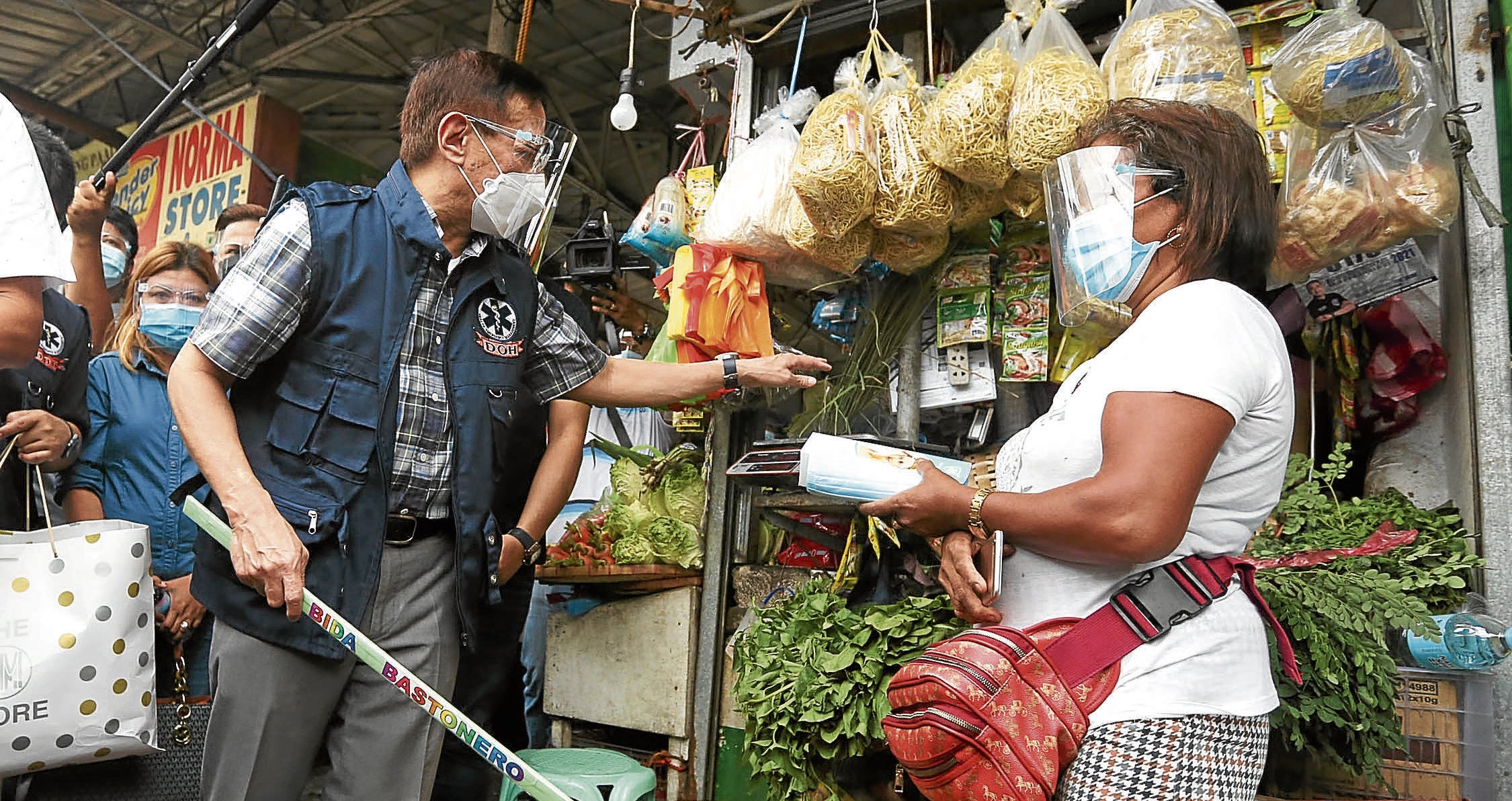 The OCTA Research Group and at least two lawmakers called for tighter restrictions in order to stop the current surge of COVID-19 infections as the country logged 7,103 new cases on Friday, the most in a single day since the pandemic began.

OCTA said it was recommending the immediate implementation of “circuit breaker measures” which could either be a “hard general community quarantine (GCQ),” or a “soft modified enhanced community quarantine (MECQ),” which would be enforced if the surge does not abate in two weeks. The independent group of academics and experts in various fields is monitoring the pandemic.

The country’s previous highest single day tally of infections was on Aug. 10, 2020, with 6,861 cases. Friday’s record did not include figures from five laboratories which were unable to submit their data on time.

“This is a very serious surge,” said OCTA Research fellow Ranjit Rye. “We cannot minimize it. We cannot downplay it. It’s already affecting lives and livelihoods.”

Rye said the minimum public health standards may not be enough to contain the current surge.

Hard GCQ includes discouraging social gatherings, prohibition of indoor dining in restaurants, and encouraging a work from home arrangement for both government and private sectors.Rye said the country needed the circuit breaker measures to stop the surge.

He noted that while Metro Manila was still under GCQ, it was quite lax and people tended to bend the rules. A hard GCQ would ensure strict adherence to the community quarantine rules, he said.

ECQ is the strictest level of the tiered lockdown protocols imposed by the government since March last year.

“The soft MECQ in our position is one where businesses are still open, transportation is available for our workers, but of course all forms of social gathering are prohibited. Work from home and other types of arrangements are required both in the public and private sector,” Rye said.

Under soft MECQ, malls and groceries can only operate at limited capacity. OCTA said this measure should be considered if the surge in COVID-19 cases continued after two weeks. The Department of Health (DOH) said the new infections raised the country’s total case count to 648,066.

It reported that 390 more patients had recovered, raising the total number of survivors to 561,902. However, another 13 had died, bringing the death toll to 12,900.

The DOH said it removed 21 duplicates from the total case count, and four cases that were previously tagged as recoveries were reclassified as deaths after final validation.

At a briefing with the DOH on Friday, Rabindra Abeyasinghe, the World Health Organization’s country representative to the Philippines, said the current surge in COVID-19 cases in the Philippines was a “complex scenario,” which could have been influenced by possible “vaccine optimism” that caused a decrease in compliance to health standards.

Another possible reason for the surge is the spread of the more transmissible variants of the virus, especially in dense cities in Metro Manila, Abeyasinghe said.

He was referring to the B.1.1.7 variant from the United Kingdom, the B1.351 from South Africa and the P.1 from Brazil which have all been detected in the country.

Rye said that whatever name the government wanted to call the circuit breaker his group was proposing, “it has to have the impact of reducing the [reproduction number of the virus].”

Asked if the government would reconsider its decision not to impose stricter lockdowns, presidential spokesperson Harry Roque said that may be decided when the Inter-Agency Task Force for the Management of Emerging Infectious Diseases (IATF) meets again next week.

“No decision forthcoming until IATF meet next week,” Roque said.

Sen. Panfilo Lacson on Friday said he would support a “time-bound ECQ-type lockdown but only in areas with unusually high number of COVID infections so as not to further punish an already suffering economy,” citing Metro Manila, Calabarzon (Cavite, Laguna, Batangas, Rizal and Quezon) and Central Visayas.

But the implementation, he said, should be within a specific time frame, such as a few weeks or months “in order to allow the business sector to plan in advance their way forward and make adjustments in their business activities like production, marketing and the like.”

He said the “bulk” of the vaccine rollout should be concentrated in those areas, too.

“In short, prevention and cure should go hand in hand,” Lacson said.

Albay Rep. Joey Salceda criticized the slow vaccination rollout despite the alarming “positivity rate,” or the number of people found positive for the virus among those who undergo tests. It was highest at 23 percent in March last year, he said.

“We are now at 15 percent positivity rate, which is higher than the 14.8 percent rate we recorded in April 2020, foretelling another wave. By all accounts, this coming wave will be bigger than the first one,” he said.

He said the pace of vaccination was “unacceptable” for inoculating only up to 10,000 people a day. At that rate, Salceda said the country would achieve herd immunity only by 2055.

“I have asked the government to issue the implementing rules on the COVID-19 Vaccination Program Act already. We cannot be bogged down by bureaucracy in the middle of a second wave,” he said.

Apart from “lockdown fatigue,” Salceda said Filipinos have been lulled into a “false sense of security in the fact that some vaccines have already arrived” and that precautions were no longer faithfully observed.

“Circuit-breaker measures will no longer work as much as effective vaccination,” he said. “Overall, lockdowns may even hurt the country more than help. That’s why we need a more ambitious pace of vaccination, combined with stricter minimum health standards and stronger health-care system support.” —WITH REPORTS FROM DJ YAP AND JULIE M. AURELIO