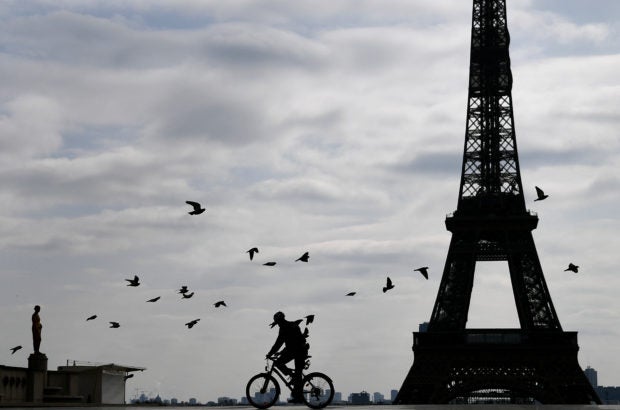 In this file photo taken on March 22, 2020, a bicycle police officer leaves after carrying out checks on people at the Trocadero esplanade, near the Eiffel Tower, in Paris, during a strict lockdown in France aimed at curbing the spread of COVID-19, the novel coronavirus. – French Prime Minister Jean Castex on March 18, 2021, announced a limited month-long lockdown for Paris and several other regions to combat rising COVID-19 cases while insisting the measures would not be as strict as in the past. While non-essential businesses will close and movement outside will be restricted in the affected regions, schools will stay open and outdoor exercise allowed up to 10 kilometers (6 miles) from home, he said. (Photo by FRANCK FIFE / AFP)

Paris, France — Parisians packed inter-city trains leaving the capital on Friday hours ahead of a new lockdown in the French capital imposed to combat a surge in coronavirus infections.

The new restrictions, announced by Prime Minister Jean Castex late on Thursday, apply to around a third of the country’s population affecting Paris and several other regions in the north and south.

The government has insisted that the new month-long lockdown will be more limited than the two others imposed last year, with schools open and outdoor exercise allowed for an unlimited amount of time.

But the approach of the new curbs in Paris from midnight Friday encouraged many to leave the notoriously cramped city for areas without the measure, such as Brittany, the southwest Atlantic coast, and Lyon in the southeast.

A spokesperson for national rail operator SNCF told AFP that trains for those destinations were now fully booked after having a 60-70 percent level of occupancy on previous Fridays.

Trains leaving Montparnasse station in Paris — which serves destinations in Brittany and the southwest — were completely full after a rush of bookings late Thursday.

Maiwenn, a 19-year old student clutching a giant suitcase, said she had decided to leave Paris to spend the rest of the university year with her family in Saint-Brieuc in Brittany.

“I’m going to stay there until the end of the term,” scheduled for mid-April, she said. “It’s been roughly a year that our courses have been on distance learning so we’re starting to get used to it.”

The other regions affected by the new measures notably include the Hauts-de-France region of northeast France which covers the city of Lille, and the Alpes-Maritimes on the Mediterranean, as well as Seine-Maritime and the Eure in the north.

Health Minister Olivier Veran expressed hope that this regional lockdown would be the last, with the situation helped by the onset of spring and the vaccination campaign.

As in previous lockdowns, a form written out or downloaded on a phone will be needed to justify why a person has left the home in areas under the new restrictions.

Outdoor exercise is allowed up to 10 kilometers (six miles) from home for an unlimited amount of time but non-essential shops will have to close.