Palace: No need to have doubts about exercising free speech 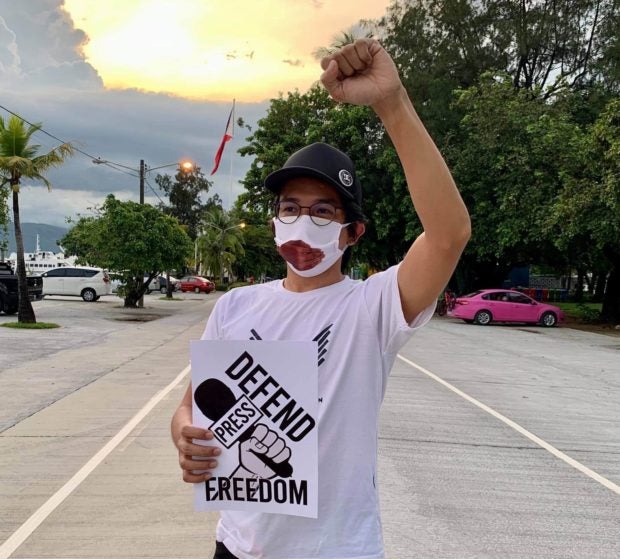 FILE PHOTO: A press freedom advocate in Zambales shows his support to journalists who joined the nationwide protests against the non-renewal of a franchise of ABS-CBN. (Photo by Joanna Rose Aglibot)

MANILA, Philippines — There is no need to have doubts about exercising free speech because President Rodrigo Duterte upholds the 1987 Constitution’s Bill of Rights, Malacañang said Friday.

Presidential spokesperson Harry Roque issued this assurance in response to a Social Weather Stations (SWS) survey that found majority of Filipinos believe it is “dangerous” to publish anything critical of the administration even if it’s the truth.

(For me, there is no need for people to have doubts in exercising their freedom of speech because that is guaranteed under the Constitution.)

(President Duterte is a lawyer and he took an oath to implement the Constitution including the Bill of Rights.)

READ: 65% of Filipinos believe it’s ‘dangerous’ to publish anything critical of administration — SWS

Roque. however, dissociated Duterte and the current administration when asked if media outfits can publish anything without experiencing the same fate as Rappler and ABS-CBN.

(In the case of Rappler, it was an Aquino-appointed SEC official who said they violated the Constitution, not the President.)

(ABS-CBN, meanwhile, had an expired franchise and only Congress can bring back this kind of franchise, not the President.)

But both media outfits have been targeted by the President in his speeches. Duterte previously called Rappler a “fake news outlet” and repeatedly vowed to block ABS-CBN’s franchise renewal.

ABS-CBN has been off the air since May 2020 after its legislative franchise expired. In July of the same year, its application for a new franchise was denied by a House of Representatives panel.

Rappler, on the other hand, was ordered shut by the SEC in 2018 for “violating the constitutional and statutory Foreign Equity Restrictions in Mass Media enforceable through rules and laws within the mandate of the Commission.” The media outfit maintained it is 100 percent Filipino-owned and -controlled.

Duterte to ABS-CBN: ‘I will see to it that you are out’

Read Next
Palace: Nothing to worry about on Duterte’s health after cancer ‘joke’
EDITORS' PICK
Miss Universe memes tickling netizens
Palace doesn’t see tension in WPS, only Duterte haters incite it
Gov’t to start vaccination of essential workers, indigents ‘after May’
Re-imagining EdTech and the classroom in a post-pandemic era
CopperMask Philippines shows support for Miss Universe Philippines 2020 Rabiya Mateo
A Spanish Celebracion with Crimson Mactan’s ‘Enye at Home’
MOST READ
‘Check your facts:’ Trillanes disputes Enrile claims on 2012 back-channel talks with China
Mexico wins Miss Universe title but Myanmar steals show
Pangilinan on China’s threat if PH digs oil in WPS: Why should we be scared?
Duterte ‘completely correct,’ PH arbitral win ‘meaningless for now’ — Locsin
Don't miss out on the latest news and information.