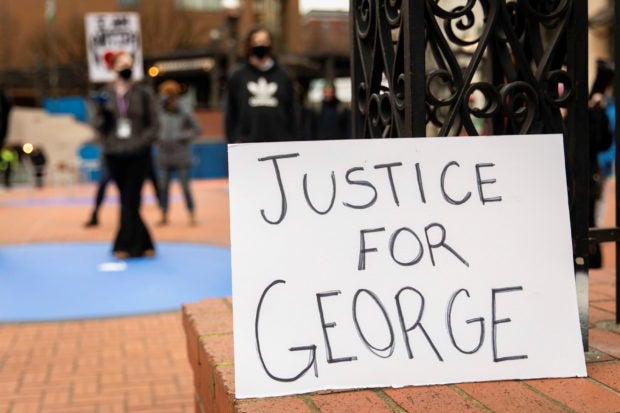 FILE PHOTO: A “justice for George” sign is displayed while people demonstrate as jury selection begins in Minneapolis for the trial of Derek Chauvin, the former policeman accused of killing George Floyd, a Black man, during a march in Portland, Oregon, U.S. March 8, 2021. REUTERS/Maranie Staab

The trial of Derek Chauvin, the former Minneapolis police officer charged with murder and manslaughter for his role in the deadly arrest of George Floyd, was due to continue on Monday with the second week of jury selection.

Seven jurors have already been seated for a trial that is being closely watched as a bellwether of the way law enforcement agencies use force and violence against Black people in a country where almost no police officer has ever been found criminally responsible for killing a civilian.

Many more potential jurors questioned by the judge, prosecutors, and Chauvin’s lead lawyer have been dismissed after it was decided they could not be impartial in the high-profile case.

Among the seated jurors are four white men, including one who is Hispanic; one white woman; a woman who is of mixed race; and a Black man who immigrated to the United States about 14 years ago. All but one are in their 20s and 30s, the court said.

Chauvin, a white man, was captured in a bystander’s video with his knee on Floyd’s neck for nearly nine minutes as Floyd, a 46-year-old Black man in handcuffs, cries out for his life and his mother, who had recently died. Chauvin keeps his knee on Floyd’s neck for several minutes even after Floyd, who was under arrest on suspicion of passing a counterfeit $20 bill, stops moving and appears to have stopped breathing.

The video appalled people around the country and abroad, giving rise to one of the largest protest movements ever seen in the United States, with daily marches against racism and police brutality.

All potential jurors who have appeared so far in the Hennepin County district court in a heavily fortified tower in downtown Minneapolis say they know who Chauvin is and what the video shows him doing; most said they had formed a negative opinion of him, though some said they could remain open to the possibility his actions were not criminal.

The process of selecting an impartial jury may be affected by the city’s announcement on Friday that it had agreed to pay $27 million to settle a federal wrongful-death lawsuit brought by Floyd’s relatives.

The court is planning to have opening arguments commence on March 29. Chauvin faces up to 40 years in prison if convicted on the most serious charge.