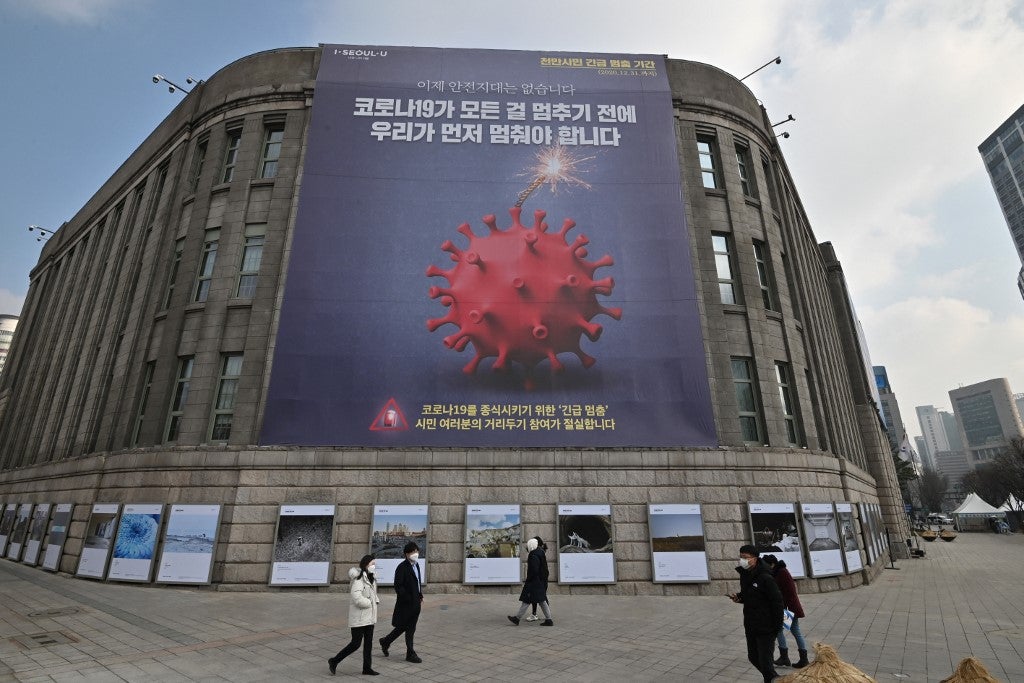 Pedestrians walk past a poster depicting the coronavirus as a bomb to warn against the Covid-19 coronavirus at the City Hall in Seoul on December 28, 2020. (Photo by Jung Yeon-je / AFP)

ANSAN, South Korea — South Korea’s most populous province has ordered all of its foreign workers to be tested for COVID-19 by March 22, sparking complaints of long lines and logistical problems, as well as of implicit xenophobia in government messaging.

The province says the order covers roughly 85,000 registered foreigners as well as an unknown number of potential undocumented workers, while those who don’t comply could face fines of up to 3 million won ($2,640).

Social media lit up with complaints from foreign residents: poor communication by the government, hours-long waits at testing centers where it was difficult to maintain distancing, and other challenges.

At one center in the city of Ansan on Monday, hundreds of people were lined up in a queue that stretched for around 100 meters.

“I agree that everyone should get tested for COVID, but it is so exhausting to wait for hours,” Jin Dianshun, a 65-year-old restaurant worker from China who said she had been standing in line for four hours, after already having stood in line for hours on Saturday before being turned away.

“I am sure Koreans would have protested if this was done the same way for them.”

One health worker at the site, who asked not to be named as they were not authorized to speak to the media, said the temporary center usually handled about 100 people per day, but surged to an average of 1,400 people after the order.

“The problem is that already by 7 a.m. there can be more than 2,000 people waiting in line,” the worker said.

As of Sunday, 120,310 foreigners had been tested, with 120 testing positive, a provincial official told Reuters.

“They want people living here in Korea to be safe from the coronavirus, even foreigners,” he said as he stood in line.

Some people took the order itself as an invasion of human rights, however.

“I’ve lived in Korea for years, pay a mortgage, run a business, have a family, pay tax,” John, a graphic designer from the United Kingdom who owns his own business and has lived in South Korea for 10 years, told Reuters by online messenger, asking to be identified only by his first name. “Yet they are treating us like we are the problem because of coronavirus. Feels xenophobic and racist.”

Korea Disease Control and Prevention Agency (KDCA) Director Jeong Eun-kyeong said on Monday that the rate of infections among foreign workers was a high-risk situation.

“We don’t think this is to discriminate or stigmatize foreign workers, and it shouldn’t be accepted that way,” she said.

Jeong said the KDCA would work with local governments to improve testing capabilities to resolve the long waits.

One American university professor who has worked in South Korea for 15 years said it made no sense to test people like her – who have been teaching online for almost a year and rarely go out – rather than fixing the workplace safety at factories that had outbreaks.

“There is no reasoning behind forcing foreign workers to take this test,” she said in an email.

In Ansan, some locals denied that there was any racial animosity, but admitted they were reassured by the campaign.

“Since there are a lot of foreigners here, every time a foreigner comes in, it would worry me,” said Hwang Mi-sun, a clothes shop owner. “Now that they are filtering out everyone, it gives me a sense of assurance.”