2 businessmen in coral smuggling charged for offenses in 2005, 2007 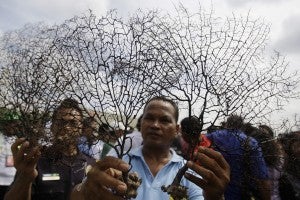 Customs officers show to photographers rare black corals as they are presented to media in Manila. AP file photo

ZAMBOANGA CITY, Philippines – Government prosecutors have finally come around to filing charges against two businessmen accused of trading in protected marine species but who have remained in business even though their warehouses have been raided by the authorities as early as 2005 and 2007.

It was the second case filed against Pring, who along with his wife Olivia Li was also charged last Wednesday in connection with the recent seizures of large quantities of protected black corals, stuffed marine turtles and assorted seashells in Manila and Zambonga City.

Pring – also known as Joe Ping, Li Yu Ming, Lee Nguyen Ming and Lee Nyu Ming – his  wife, and Wee have vanished, however, and the authorities fear they may have left the country.

Cabaron said the charges that were filed on Thursday were for violation of the Fisheries Code, specifically for trading in protected marine species. The charges were filed by prosecutors Bienvenido Orillo, Gladdys Bernabe and Alfredo Jimenez Jr. based.

They were the same charges filed against Pring and his wife, who owns the Zamboanga-based Lim and Li trading. Pring’s own company is called Uan Huat Trading.

“Evidence at hand indicated that there was reasonable ground to believe that a crime have been committed and the accused are probably guilty,” Cabaron said, referring to marine species recovered from Wee’s warehouse in Sta. Catalina village in 2005 and from Pring’s warehouse on Magay Street  in 2007. Pring’s warehouse was also raided last week.

None of the three prosecutors, however, would not say why charges were filed only now for seizures made several years ago although the National Bureau of Investigation had submitted formal complaints in 2008.

Bernabe and Jimenez Jr. said they would make the necessary explanation when the Senate, which is investigating the smuggling of protected marine species, asks them to testify.

But Cabaron said there was no explanation other than that they were busy and undermanned.

He said there were only seven prosecutors working on big cases, but he did not cite any specific ones.

“Maybe we erred in our priority but we are also handling other big cases and we lack the necessary manpower,” Cabaron said.

Meanwhile, Pring and Li, appeared to have left the city already.

Since Thursday, agents from the office of the Senate’s sergeant-at-arms have been trying to locate the couple to no avail.

De Ocampo and his men went to four locations, including Barangay (village) Tetuan where the couple was known to have resided, but they were nowhere to be found. The authorities said they could not find Wee either.