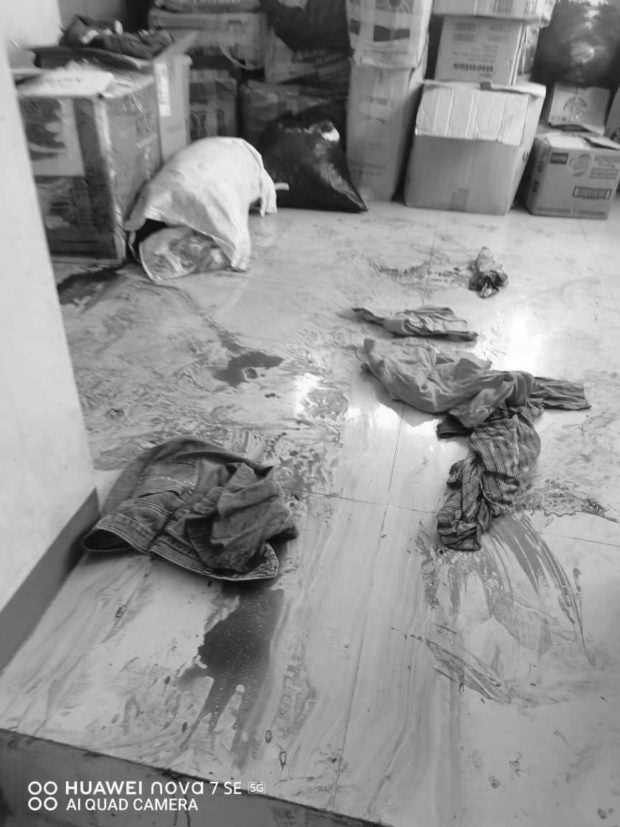 The bloody aftermath of the crackdown on activists showed the blood-soaked quarters of Workers’ Assistance Center where Manny Asuncion of Bayan-Cavite was gunned down in Dasma, Cavite. Image from KMU/Twitter

MANILA, Philippines — The Philippine National Police (PNP) has maintained that the simultaneous operations in Calabarzon Region last Sunday, which resulted in the death of nine activists and the arrest of six, were legitimate operations.

PNP Spokesperson Brig. Gen. Ildebrandi Usana said in a briefing on Wednesday, the video posted by the National Task Force to End Local Communist Armed Insurgency (NTF-ELCAC) on Facebook showed that 37 high-powered and low-powered firearms were seized from the suspects.

He also stressed that the operations followed the procedure required for these kinds of operations, noting that even the PNP’s air assets were mobilized for possible airlifting of wounded people — as a testament to the legitimacy of the operations.

“And the number of ammunition, 288 different caliber po ‘yan […] Ito pong six arrested, sila po ay kinasuhan na ng violation ng R.A. 10591 which is the Firearms and Ammunition Regulations Act, as well as R.A.9516 which is also a violation of the Anti-Explosives Law,” he added.

(On the number of ammunition, 288 of different calibers were also recovered.  These six suspects arrested were charged for violating R.A. 10591 which is the Firearms and Ammunition Regulations Act, as well as R.A.9516 which is also a violation of the Anti-Explosives Law.)

The PNP spokesperson also disputed assertions that the killings and the operation itself was a crackdown on communist groups and left-leaning organizations, adding that it was a mere law enforcement operation against loose firearms.

(Those operations carried out by our police officers were at least, legitimate, notwithstanding the fact that some groups claims that this was an intended crackdown on communist terrorist groups. No, we’re talking about law enforcement here.)

“There were violations of law committed by a number of individuals resulting from information gathered by our police officers, do’n po sa mga localities, we have to understand na there are some residents in the different communities who really are interested to put an end to any kind of violence being committed by these individuals,” he added.

Last March 7, nine individuals whom rights groups said were mere activists were killed in simultaneous police operations in the provinces of Rizal, Laguna, and Cavite.  PNP however maintained that the activists resisted arrest and fought back.

The incident however drew widespread condemnation of the police and the government as a whole, with several local and international organizations chiming in and expressing concern over the attacks.

As of now, the Commission on Human Rights and the task force on extrajudicial killings headed by the Department of Justice are doing separate investigations of the incident.