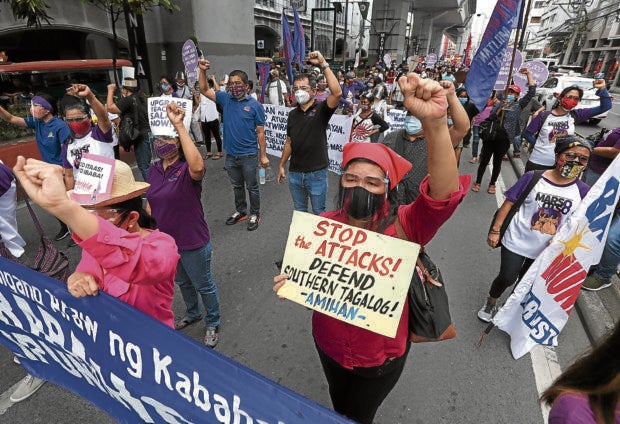 WOMEN’S DAY PROTEST Protesters call on the government to stop attacks on activists during a rally staged in Manila on Monday as part of the celebration of International Women’s Day. —MARIANNE BERMUDEZ

The Philippine National Police maintained on Monday the legitimacy of its operations in the Calabarzon region that led to the deaths of nine activists and the arrest of six others on Sunday.

A spokesperson for the Calabarzon police, Lt. Col. Chitadel Gaoiran, said the fatalities were the subjects of search warrants and engaged police and soldiers in armed confrontations—or in Filipino, “nanlaban.”

Gaoiran said the joint police-military operations were a simultaneous implementation of search warrants for loose firearms and explosives.

“[T]hese [are] considered legitimate operations. We [were] armed with search warrants. We never wanted [the encounters]. As much as possible we do not want that but unfortunately there were nine persons killed in the police operations,” she said.

Gen. Debold Sinas, the PNP chief, made the same assertion at a ceremony on Monday in Camp Crame.

“It’s a legitimate operation because they are covered by search warrants,” Sinas said of Sunday’s raids. “If you know how difficult it is to get search warrants, then you would understand. You have to justify the charge, [have] witnesses. That cannot be illegitimate as what they [the activists] are saying.”

Officials on Monday had yet to release the identities of the nine fatalities.

But the Calabarzon police, in a statement on Facebook posted on Sunday night, claimed the operations targeted members of the Communist Party of the Philippines (CPP) and its armed wing, the New People’s Army (NPA). Rights group Karapatan identified five of the fatalities as members of activist organizations in the region.

“The [PNP] launched the operations to go after those members of CTGs (communist terrorist groups) suspected [of] hiding firearms and explosives in their possession believed to be their assets being used against the government forces and in the advancement of their extortion activities,” the statement by the Calabarzon police said.

“We have to act together to end the 51-year-old communist insurgency in the country,” Police Brig. Gen. Felipe Natividad, Calabarzon police chief, said in the statement.

In a statement on Monday, Marco Valbuena, CPP information officer, said “the murders and mass arrest of activists mark a heightening of the Duterte tyrannical regime’s dirty war against all patriotic and democratic forces in Southern Tagalog, Bicol and across the country.”

The Department of Justice (DOJ) on Monday ordered an investigation while Malacañang vowed an impartial inquiry into Sunday’s operations.

“We will investigate the killings of the nine [fatalities] because they do not fall under international humanitarian law, because when they were killed, they were not carrying guns,” presidential spokesperson Harry Roque said in his Monday press briefing.

Roque said one of the principles of international humanitarian law is that “you must only target those who are involved in the battle and not those who are not part of it like civilians.”

But he said President

Duterte’s “kill” order was legal. “Under [international humanitarian law,] the President’s order—kill, kill, kill—is correct because there is a war. If the battle involves arms that could kill you, you cannot wait to be shot and killed,” he said.

Justice Secretary Menardo Guevarra told reporters he was dismayed over Sunday’s developments, which, as he pointed out, happened almost two weeks after he reported to the United Nations Human Rights Council on Feb. 24 the critical flaws in the Philippine government’s war on drugs.

“I am quite disappointed because these incidents kept happening notwithstanding the things I mentioned before the international body,” Guevarra said.

“I was really hoping that with that statement I made before the UN, our law enforcers would be more careful in their operations,” he added. “But these things continue to happen so we really need to sit down with the [law enforcement units] to make sure these incidents would be prevented from happening again. It could be avoided. We could do something about it.”

Told that the police had claimed that the slain activists were actually members of the NPA, Guevarra said: “We are not bound by the characterization given by the police. We shall consider other available information.”

But asked if the incident on Sunday may have been an offshoot of the President’s order to state forces on Friday night to “kill” communist rebels, Guevarra said, “I really cannot speculate if there’s a connection with what the President said. The best thing to do really is to conduct a fact-finding investigation of what happened so that’s only the time we can probably make a conclusion,” he said.

For Cristina Palabay, Karapatan secretary general, “there is no other mastermind behind these gruesome murders but Duterte himself—who, just a few days ago, gave the go signal for this appalling carnage.”

In a statement, Commission on Human Rights (CHR) spokesperson Jacqueline de Guia said the commission “reiterates its stern reminder to all government officials, who have the sworn duty to uphold human rights, to exemplify this obligation in words and in deeds.”

“The CHR finds the number of deaths most concerning in light of the pattern of prevalent Red-tagging and escalating attacks against activists,” De Guia said.

The National Union of Peoples’ Lawyers on Monday called on the Supreme Court to revisit and review court rules that allowed judges to issue warrants in behalf of police-military operations.

The group said it would ask the Supreme Court and the DOJ to revisit the high court’s Circular AM No. 3-8-2-SC, which empowers Manila and Quezon City judges to issue warrants outside their jurisdictions.

In the Senate, Sen. Grace Poe reminded “law enforcers” to be guided by Section 1 of the Bill of Rights in the Constitution, that “no person shall be deprived of life, liberty, or property without due process of law, nor shall any person be denied the equal protection of the laws.”

Parlade also speaks for the National Task Force to End Local Communist Armed Conflict. Responding in a text message when sought for comment on the DOJ’s planned inquiry, he said: “Of course that is welcome.”