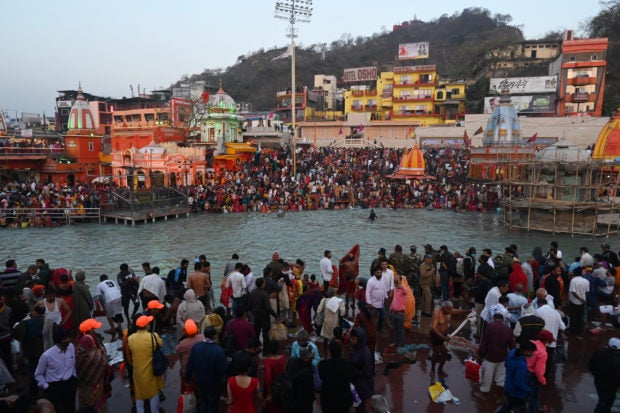 Hindu devotees take a holy dip in the waters of the River Ganges on the Shahi snan (grand bath) on the occasion of Maha Shivratri festival during the ongoing religious Kumbh Mela festival in Haridwar on March 11, 2021. (Photo by Prakash SINGH / AFP)

HARIDWAR, India — Naked, dreadlocked holymen were among hundred of thousands of jubilant Hindu pilgrims who thronged the banks of India’s Ganges river on Thursday, ignoring any coronavirus threat, for one of the nation’s most famous and colorful religious festivals.

Authorities in Haridwar expect 2.5 million people for the Maha Shivratri festival, one of three auspicious bathing days over the next month as part of a major gathering called the Kumbh Mela.

Before dawn men, women and children jostled for space along the several miles of riverbank before a brief plunge in the fast-flowing water, singing hymns and showering flowers into the Ganges.

The highlight later was set to be a jubilant procession by groups of hundreds of Naga Sadhus –- naked holy men with long dreadlocks, their bodies smeared in ash — before their dip in the holy town in the Himalayan foothills.

Because of the pandemic the government has curtailed the Kumbh Mela, a mass event held regularly in different cities, and negative test certificates are in theory compulsory.

Announcements on the public address system in Haridwar blared out reminders to wear masks and maintain distancing as hundreds of volunteers sprayed sanitizer on the pilgrims.

But with coronavirus cases having fallen sharply in recent months and many aspects of life back to normal in the country of 1.3 billion people, in reality masks are few and far between.

“There is no fear of the pandemic and people are moving freely. India has already defeated the disease and there’s nothing to worry about,” pilgrim Nitesh Kumar, 31, told AFP.

“I have been waiting for this day for years but because of the pandemic I thought it will be cancelled. But our belief is stronger than the pandemic,” said Rishab, another pilgrim.

On Thursday the country recorded almost 23,000 infections, down sharply from a peak of almost 100,000 in September but more than double the rates seen in January.

Cases are rising again in several regions, especially in the western state of Maharashtra and its capital Mumbai where authorities have reimposed restrictions.

Hindus believe bathing in the Ganges will cleanse their sins and bring salvation.

According to Hindu mythology, gods and demons fought a war over a sacred pitcher containing the nectar of immortality. Drops fell at four different locations, which now alternate as hosts for the immense Kumbh Mela gatherings.

Recognized as an example of intangible cultural heritage by UNESCO in 2017, the last Kumbh Mela in Allahabad in 2019 attracted around 55 million people over 48 days.