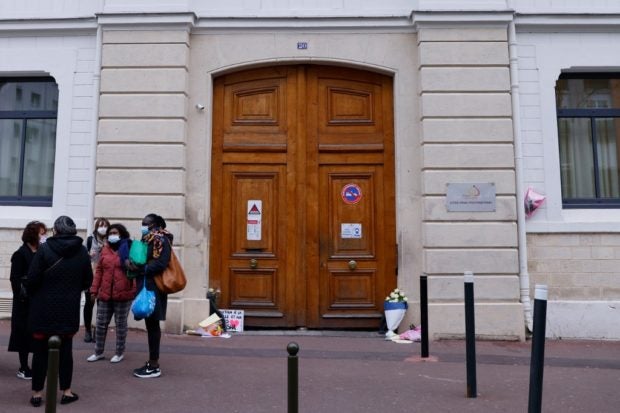 PARIS — The French government expressed alarm Wednesday over the “despicable” death of a 14-year-old girl whose beaten body was found drowned in the Seine river after she endured online harassment.

Two 15-year-olds, a boy and a girl, who attended the same school as the victim in Argenteuil on the outskirts of Paris were arrested Tuesday and brought before a judge with a view to being charged with murder, prosecutors said.

The killing late Monday has raised new concerns about juvenile crime in France after a spate of violence blamed on fighting between youth gangs.

Pupils interviewed by AFP outside the school in Argenteuil said the dispute started when photos of the victim “in underwear” circulated on the popular messaging service Snapchat.

“What happened to this young girl is utterly terrible and despicable,” government spokesman Gabriel Attal told reporters after a cabinet meeting chaired by President Emmanuel Macron.

“She was taken away by harassment, taken away by a vicious circle that contributed to this drama,” he added, vowing that those responsible would be punished.

Attal said: “We know that harassment begins at school, it starts in the classroom and the playground. But what is new in recent years is that it continues online after class.”

The mother of the detained boy told police her son admitted that he and his friend had hit a young girl and she fell into the Seine, which flows through Argenteuil after leaving Paris.

Regional prosecutor Eric Corbaux said the judge had been asked to keep the pair under arrest in their appearance on Wednesday, and that during their initial detention they “had not shown immediate remorse.”

As minors they risk up to 20 years in prison if convicted of murder.

He said the initial investigation had indicated that she had been beaten by the boy and then thrown into the Seine with the help of the girl while still alive. She then drowned in the water.

“The victim at that time was still conscious. She was crying, her eyes open. The young man and the young girl would have grabbed the victim to throw her into the Seine below the quay. It is a very high quay made from concrete,” said the prosecutor.

The school confirmed Wednesday that the two detained youths had already faced a disciplinary procedure over their behavior towards the victim, and that her mother had been advised to file a police complaint.

The pair had been banned from entering the school and had been summoned to appear before a disciplinary committee on Tuesday, the day after the victim was killed, the school said.

There was “tension between these three students after the victim’s phone was hacked and compromising photos were posted by her two classmates,” the Cognacq-Jay high school said in a statement to AFP.

Worries about youth violence were already growing after a 15-year-old boy of Ukrainian origin was severely beaten in Paris in January, with the attack caught on video and going viral.

“We cannot accept a trivialization of violence,” said Attal, adding that there needed to be a “penal response for minors that was quicker and more effective.”