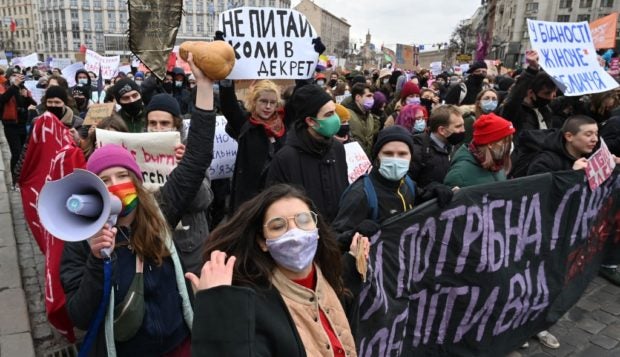 Activists hold placards and chant slogans as they take part in a march for the International Women’s Day in Ukrainian capital of Kiev on March 8, 2021. Photo by Sergei SUPINSKY / AFP

The demonstrators, mainly women, carried signs that read “No to domestic violence” and “I am allergic to patriarchy”.

Ukraine signed the Istanbul Convention in 2011 but has yet to ratify it. The document is aimed at fighting the abuse of women, in particular domestic violence.

But religious groups in Ukraine have criticized attempts to introduce the notion of gender in national legislation, saying it threatens traditional family values.

The rally was protected by a large police presence and officers arrested two men who tried to attack the march. Several dozen far-right activists meanwhile staged a demonstration of their own nearby.

Ukrainian laws designed to protect victims of domestic violence have many loopholes and are rarely enforced. Suspects are more often than not acquitted, say campaigners.

Organizers of the march also sought to call attention to the heavy impact of Covid-19 on women, who represent a majority among Ukrainian health care providers, teachers and social workers.

Two-thirds of women in Ukraine say they have suffered physical, psychological or sexual abuse since the age of 15, according to a 2019 study by the Organization for Security and Cooperation in Europe (OSCE).