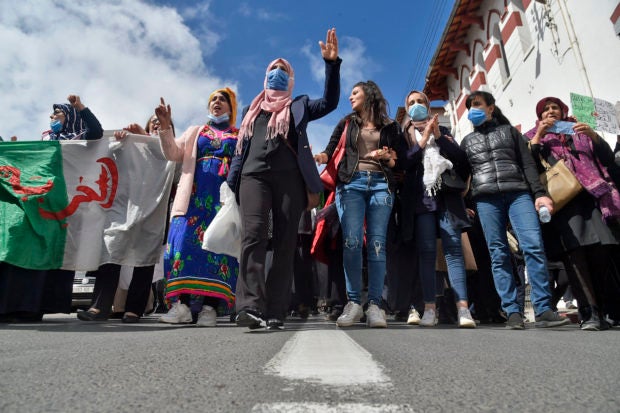 Algerian women chant slogans during an anti-government protest in the capital Algiers on March 8, 2021. Thousands of people demonstrated in Algiers and other cities across the country, confirming the remobilization of the Hirak protest movement again in the streets since the second anniversary of the uprising on February 22. Photo by RYAD KRAMDI / AFP

ALGIERS — Hundreds of women marched Monday in the Algerian capital to protest against a family code many consider demeaning, as they marked International Women’s Day in the conservative country.

The family code is the general law that governs family and property relations in Algeria.

Adopted in 1984 and revised in 2005, it is inspired from Islamic sharia law and seen by many rights groups as anti-constitutional, because it does not respect equality between citizens.

Women held up banners calling on authorities to abrogate the “infamous” code and other signs saying they were marching “for change”, AFP reporters said.

Feminists say that under the code women’s rights are limited and they are subject to rules set out by men, rendering women “minors for life”, despite the modifications made in 2005.

The marchers also denounced violence against murder including femicide in Algeria, where according to campaigners 75 such killings took place in 2019, and more than 40 last year.

The protesters also slammed a controversial draft law that calls for stripping Algerians of their citizenship if they carry out activities abroad that could undermine the “interests of the nation”.

Chanting “women are committed” and “equality between men and women”, the protesters marched toward the central post office, an emblematic rallying point for the pro-democracy “Hirak” movement.

At the end of the peaceful protest some demonstrators were jostled by policemen who sought to push them out of the city centre, witnesses said.

Read Next
I can’t get justice from PNP: Solon wants NBI to probe Calbayog mayor slay
EDITORS' PICK
On Day 2 of implementation, gov’t says workers now exempt from ‘no vax, no ride’ policy
Gear up and get ready to play with Yamaha Mio Gear
DOH: 28,471 new COVID-19 cases in PH; active cases now 284,458
Metro Manila posts lowest temperature yet this ‘amihan’ season at 19°C
Over 3 Million worth of prizes to be won at Smart Padala’s SENDali Manalo Promo!
Acer starts the year off strong with the Aspire Vero National Geographic Edition
MOST READ
Emma Stone calls Andrew Garfield a ‘jerk’ after he ‘lied’ about his ‘Spider-Man: No Way Home’ appearance
LOOK: Edu Manzano, Cherry Pie Picache enjoy Palawan with her son Nio Tria
Unvaccinated has rights but it has limits—DOJ
Retirements prompting major reshuffle in PH military
Don't miss out on the latest news and information.