45% of billionaires in PH are Chinese — study | Inquirer News

MANILA, Philippines — Most Chinese billion-dollar businessmen who have ventured out of China have settled in Southeast Asia, significantly contributing to the economic status of the region and the countries where they are in, a recent Global Rich List by Hurun Report showed.

The latest report by the research, media, and investments firm found that out of the 20 billionaires in the Philippines, nine or 45 percent are of Chinese descent.

Meanwhile, a large portion of Singapore’s wealthiest is Chinese, with a total of 65 percent or 23 out of 35 billionaires. 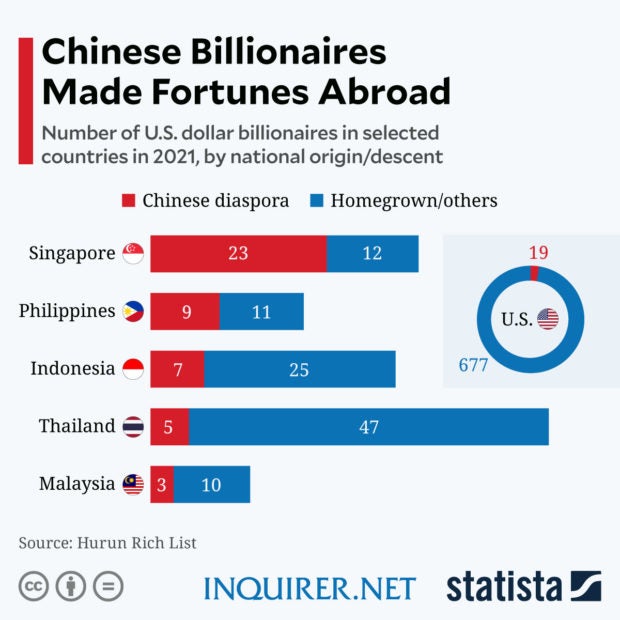 On the other hand, at least a quarter of Indonesia’s and Malaysia’s billionaires are Chinese, while around 10 percent of the billionaires in Thailand are of Chinese origin.

“Thirty-four-point-six percent, up from 30.2% last year, of the world’s billionaires are of Chinese origin, significantly higher than the 20% of the world’s population that China has today. Outside of Greater China, the Chinese diaspora is based predominantly in South East Asia, led by Singapore,” the report read.

However, a report by market and data consumer company Statista noted that the number of Chinese diaspora billionaires is “only a small group compared to those residing in China.”

“Hurun counted more than 1,000 billionaires living in China, ahead of 696 in the U.S., 177 in India, and 141 in Germany. Even in the U.S., the impact of the super-rich Chinese was visible as they made up almost 3 percent of all U.S.-based billionaires – or 19 out of 696,” said Katharina Buchholz, senior data journalist of Statista.

Greater China, home for a total of 1,049 billionaires, was described by the Hurun Report as “the world’s absolute No. 1 when it comes to billionaires, with more than the next three countries combined.”

According to the firm, China’s billionaires were split into mainland China with 910, Hong Kong 82, and the separatist Taiwan with 57 billionaires.

“China has added more new faces than the rest of the world combined and pulled away big time from the USA in the past year. Despite the Trade War with the USA, China added 259 new billionaires, to become the first country in the world to top 1000 ‘known’ dollar billionaires with 1058, more than the combined total of the next three countries of the USA, India, and Germany. In the last five years, China has added 490 billionaires, compared with 160 in the US,” said Hurun Report’s chairman and chief researcher Rupert Hoogewerf.

“Asia has, for the first time in perhaps hundreds of years, more billionaires than the rest of the world combined. Wealth creation is moving to Asia,” Hoogewerf added.

Among the notable super-rich, ethnic Chinese residing in the country is the Sy family – which was also named as Asia’s tenth richest according to a 2020 ranking by Bloomberg, and consistently ranking at the top of Forbes’ Richest. 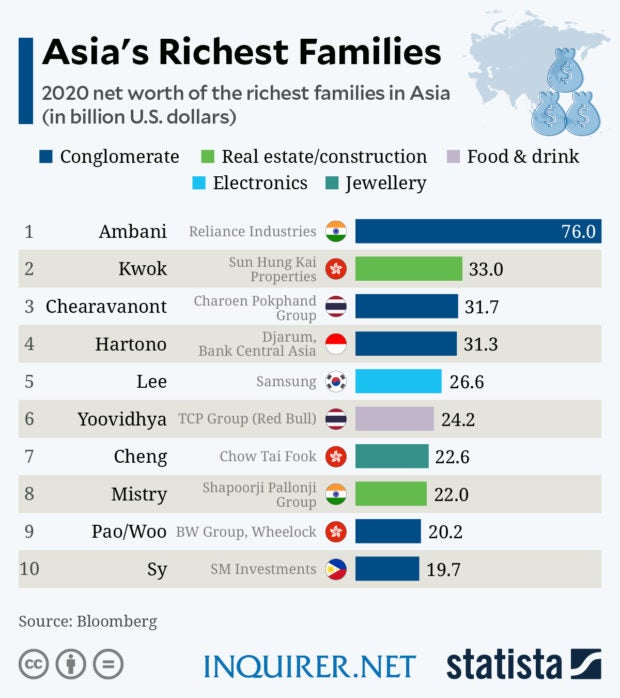 In a ranking published on November 29 last year, the family of late tycoon Henry Sy finished 10th in the list with a total net worth of $19.7 billion. According to Bloomberg, the group operates almost 2,800 retail stores and about 2,000 banking branches.

The reputable family headed by Henry Sy hailed from Xiamen, China, and settled in the Philippines in the 1930s.

“Starting out in food and shoe retail, their business branched out into banking as well as property and today runs Banco de Oro, SM Supermarkets and SM department stores, among others,” stated in a report by Statista.

SMIC also handles the SM Prime Holdings which the company described as “the largest integrated property developers in the country and in Southeast Asia.”

The Sy Family landed 8th place in Bloomberg’s August 2019 ranking. The group’s previous recorded wealth in the list was $20.9 billion.

Despite the departure of the late SM founder, his heirs remain as the richest in the Philippines with a collective net worth estimated at $13.9 billion, based on the 2020 Forbes Philippines Rich List.