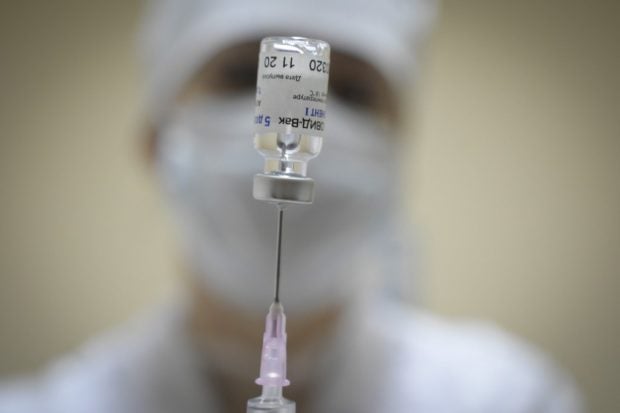 (FILES) In this file photo taken on December 30, 2020, a nurse prepares a dose of the Sputnik V (Gam-COVID-Vac) Covid-19 vaccine for a patient at a clinic in Moscow, as the country started its vaccination campaign for people aged 60 and over, to fight against the spread of the novel coronavirus. – Russia announced on January 11 that 1.5 million people around the world had received its Sputnik V coronavirus vaccine as part of an initiative Kremlin critics have described as a geopolitical push. (Photo by Natalia KOLESNIKOVA / AFP)

Vienna, Austria — The head of the management board at the EU’s medicines regulator warned late Sunday against emergency national authorizations of Russia’s Sputnik V vaccine, comparing the idea to “Russian roulette.”

Last week, the Amsterdam-based European Medicines Agency (EMA) launched a rolling review of the Sputnik V vaccine, a key step towards being approved as the first non-Western jab to be used across the 27-nation bloc.

Hungary has already approved Sputnik V and started using it as part of its vaccine rollout, while the Czech Republic and Slovakia have also ordered doses and say they will not wait for EMA approval.

“I would strongly advise against a national emergency authorization,” she said, pointing to the fact that there was not yet sufficient safety data about those who had already been given the vaccine.

“We could have Sputnik V on the market in the future when we’ve examined the necessary data,” she said, adding that the vaccine needed to match up to European criteria on quality control and efficacy.

Austrian Chancellor Sebastian Kurz on Friday met the top Russian official in charge of marketing Sputnik V, and had previously emphasized that vaccine procurement should not be subject to “geopolitical struggles.”

Kurz has said, however, that Austria will wait for EMA approval before using the vaccine.

Russia has said it is ready to provide jabs for 50 million Europeans as soon as Sputnik V gets the green light.

Moscow has pushed Europe to follow the lead of dozens of countries around the world that have approved Sputnik, but Brussels has been wary the Kremlin will use the vaccine as a soft-power tool.

The EU, which has been criticized for a slow start to its mass vaccination rollout, has so far authorized three vaccines: the US-German Pfizer/BioNTech jab, US firm Moderna’s shot, and the British-Swedish AstraZeneca/Oxford vaccine.

It is set to decide on the one-shot Johnson & Johnson vaccine on March 11, while jabs by Novavax and CureVac are also under rolling review.