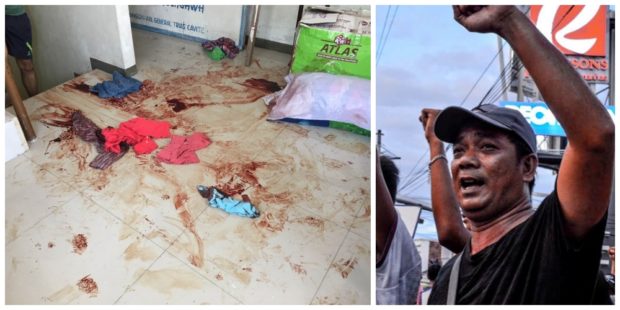 AFTERMATH Clothes used to wipe off blood are strewn across the floor of the house of Bayan coordinator Emmanuel “Manny” Asuncion (right) in Salitran village, Dasmariñas City, Cavite province. Asuncion was shot dead in his house early on Sunday. —CONTRIBUTED PHOTOS

MANILA, Philippines — Amnesty International (AI) has expressed alarm over the “tokhang-style” raids supposedly being conducted against activists and human rights defenders following the killing of nine alleged members of advocacy groups and arrest of six others in the Southern Tagalog region on Sunday.

“We are deeply alarmed that ‘tokhang’-style raids during anti-drug operations – where targets are killed by the police allegedly for fighting back – are increasingly being used against activists and rights defenders,” AI Philippines Section Director Butch Olano said in a statement on Monday.

Olano noted that various organizations, including the United Nations, have cast doubt on the “nanlaban” or self-defense narrative by the police and that AI has documented testimonies from witnesses and families contradicting police reports.

The police and military said they conducted raids on progressive groups in Cavite, Laguna, Batangas, and Rizal on Sunday, which led to the death of nine activists and the arrest of six others.

“The Duterte administration’s brutality knows no bounds. Just two days after President Duterte ordered them to ‘kill’ and ‘finish off’ communist rebels and to ‘forget about human rights, security forces launched another deadly operation killing at least 9 people in Calabarzon this time. The bloodbath must end now,” Olano said.

AI urged the government to conduct “effective and independent” investigations into the raids in the Calabarzon region and prosecute in fair trials those found responsible for human rights violations.

It also asked government officials to end the ongoing incitement of extrajudicial killings and implement measures in line with the recommendations of the UN High Commissioner’s 2020 report.

“In light of the rapidly worsening human rights situation in the Philippines, states have the responsibility to hold the Philippine government to account for its commitments before the UN Human Rights Council, which must now take overdue action and launch an independent international investigation to address this alarming situation and end the cycle of impunity that continues to fuel violations,” Olano said.