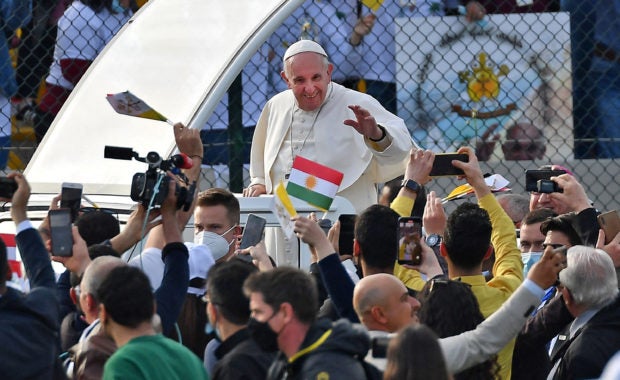 Pope Francis blesses people as he arrives in the popemobile vehicle at the Franso Hariri Stadium in Arbil, on March 7, 2021, in the capital of the northern Iraqi Kurdish autonomous region. – Pope Francis, on his historic Iraq tour, visits today Christian communities that endured the brutality of the Islamic State group until the jihadists’ “caliphate” was defeated three years ago. (Photo by Vincenzo PINTO / AFP)

ARBIL, Iraq – Pope Francis on his last night in Iraq Sunday met the father of Alan Kurdi, the drowned Syrian Kurdish toddler who became a symbol of the plight of migrants.

The photos of  Alan’s tiny body, washed up on a Turkish beach in 2015, shocked the world and brought renewed attention to the deadly sea route many migrants take to reach the West.

After holding his last public event on Sunday, the 84-year-old met Alan’s father Abdullah in Arbil, the capital of Iraq’s northern Kurdistan region.

In a photograph published by the Vatican, the Pope is seen raising his hand as if offering a blessing while looking intently at Abdullah, who has his head bowed.

“The Pope spoke for a long time with Abdullah Kurdi, and was able to hear the pain of a father who has lost his family,” said a statement by the Vatican.

The Kurdi family originally hails from Kobane in northern Syria, and were hoping to one day resettle in Canada.

But their dream turned to a nightmare six years ago when three-year-old Alan drowned alongside his older brother Galip and his mother Rehanna.

The only survivor was Abdullah, who resettled in northern Iraq.

The Pope has for years called for an end to the conflict in Syria, which erupted in 2011 in protests against the ruling regime before spiralling into violence.

During an interfaith service in southern Iraq on Saturday, Pope Francis made a plea for “unity” after war.

“Let us ask for this in praying for the whole Middle East. Here I think especially of neighbouring war-torn Syria,” he said.

The pontiff wil return to Rome on Monday morning but said he would always keep Iraq “in his heart.”