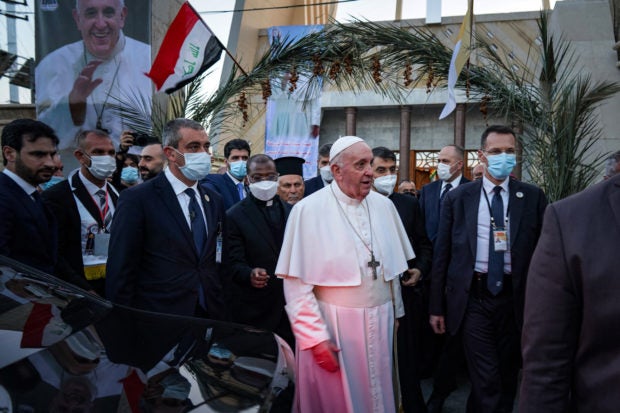 Security personnel surround Pope Francis as he leaves Baghdad’s Syriac Catholic Cathedral of Our Lady of Salvation (Sayidat al-Najat) at the start of the first ever papal visit to Iraq on March 5, 2021. – In an address to the faithful in Baghdad, the pontiff expressed his gratitude to his fellow clergy for supporting Iraq’s Christians, whose population has dwindled due to conflict. (Photo by Ayman HENNA / AFP)

NAJAF, Iraq  – Pope Francis begins the second day of his historic Iraq visit on Saturday with an extraordinary meeting with Grand Ayatollah Ali Sistani, the top authority for the country’s Shiite Muslims.

The 84-year-old pontiff is defying a second wave of coronavirus cases and renewed security fears to make a “long-awaited” trip to Iraq, aiming to comfort the country’s ancient Christian community, while also deepening his dialogue with other religions.

Having spoken to the faithful in Baghdad on Friday, Francis will travel to the Iraqi shrine city of Najaf early on Saturday to see 90-year-old Sistani.

The two will meet at 9 a.m. (0600 GMT) in Sistani’s humble home in one of Najaf’s tiny alleyways, with no press allowed, as the Grand Ayatollah is almost never seen in public.

The visit is one of the highlights of Francis’ four-day trip to war-scarred Iraq, where Sistani has played a key role in tamping down tensions in recent decades.

It took months of careful negotiations between Najaf and the Vatican to secure the one-on-one meeting.

“We feel proud of what this visit represents and we thank those who made it possible,” said Mohamed Ali Bahr al-Ulum, a senior cleric in Najaf.

On his arrival, the Pope will be greeted by posters featuring a famous saying by Ali, the fourth caliph and the Prophet Mohammed’s relative, who is buried in Najaf.

“People are of two kinds, either your brothers in faith or your equals in humanity,” read the banners.

Sistani, meanwhile, is followed by most of the world’s 200 million Shiites — a minority among Muslims but the majority in Iraq — and is a national figure for Iraqis.

“Ali Sistani is a religious leader with a high moral authority,” said Cardinal Miguel Angel Ayuso Guixot, the head of the Pontifical Council for Interreligious Dialogue and a specialist in Islamic studies. 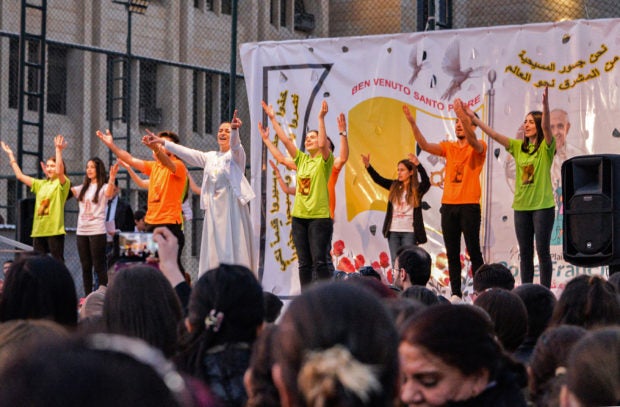 Massir Hayat, a Catholic nun in charge of youth organisation at the Immaculate Mary Dominican Sisters Convent, performs with youths during a celebration in a public square in the predominantly Christian town of Qaraqosh (Baghdeda), in Nineveh province, some 30 kilometres from Iraq’s northern Mosul on March 5, 2021, ahead of the pope’s visit to the town. (Photo by Zaid AL-OBEIDI / AFP)

Sistani began his religious studies at the age of five, ascending through the ranks of Shiite clergy to grand ayatollah in the 1990s.

While Saddam Hussein was in power, he languished under house arrest for years, but emerged after the US-led invasion that toppled the repressive regime to play an unprecedented public role.

On Friday in Baghdad, Pope Francis made a similar plea.

“May partisan interests cease, those outside interests who don’t take into account the local population,” Francis said.

Sistani has had a complicated relationship with his birthplace Iran, where the other main seat of Shiite religious authority lies: Qom.

“The Najaf school has great prestige and is more secular than the more religious Qom school,” Ayuso said.

In Abu Dhabi in 2019, the Pope met Sheikh Ahmed al-Tayeb, the imam of the Al-Azhar mosque in Cairo and a key authority for Sunni Muslims.

They signed a text encouraging Christian-Muslim dialogue, which Catholic clerics hoped Sistani would also endorse, but clerical sources in Najaf told AFP it is unlikely.

While the Pope has been vaccinated and encouraged others to get the jab, Sistani’s office has not announced his vaccination. 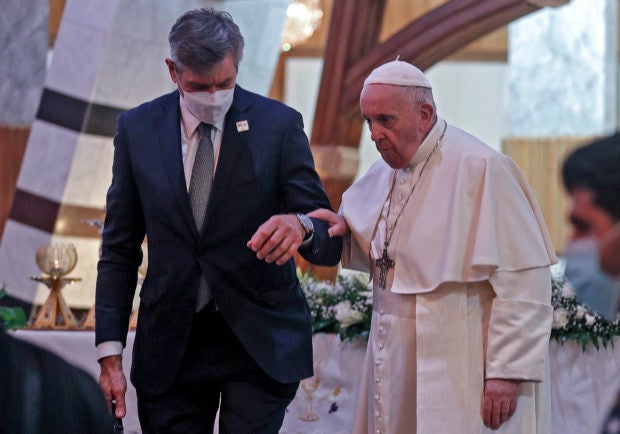 Pope Francis is helped by a bodyguard during his visit to the Syriac Catholic Cathedral of Our Lady of Salvation (Sayidat al-Najat) in the capital Baghdad at the start of the first ever papal visit to Iraq on March 5, 2021. – In an address to the faithful in Baghdad, Pope Francis expressed his gratitude to his fellow clergy for supporting Iraq’s Christians, whose population has dwindled due to conflict. (Photo by Ahmad AL-RUBAYE / AFP)

Iraq is currently gripped by a resurgence of coronavirus cases, recording more than 5,000 infections and more than two dozen deaths daily.

Following his visit to the Grand Ayatollah, the Pope will head to the desert site of the ancient city of Ur — believed to be the birthplace of the Prophet Abraham — where he will host an interfaith service, with many of Iraq’s other religious minorities in attendance.