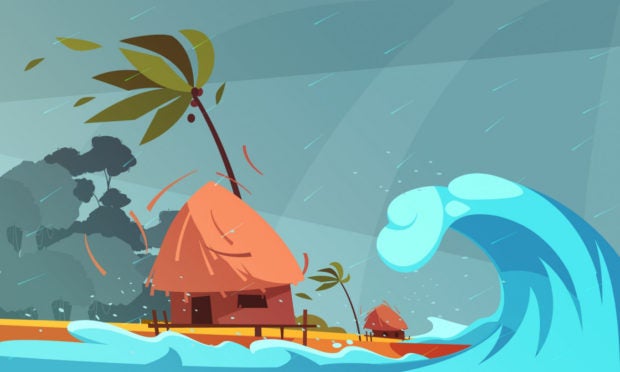 Warning sirens sounded across Noumea as authorities ordered evacuations amid fears that waves of up three metres (10 feet) were headed towards the French territory.

“People must leave beach areas and stop all water activities, and should not pick their children up at schools to avoid creating traffic jams,” emergency services spokesman Alexandre Rosignol told public radio.

In New Zealand, communities along stretches of the North Island were warned to flee as tsunami alert sirens wailed after an 8.1-magnitude quake, which followed earlier tremors in the same region measuring 7.4 and 7.3.

“People near the coast… must move immediately to the nearest high ground, out of all tsunami evacuation zones, or as far inland as possible.”

It was preceded by two seismic jolts that were also enormously powerful, in an unusually strong cluster even for the Pacific ring of fire, where the Earth’s tectonic plates collide.

New Zealand’s NEMA said the remoteness of the quakes did not minimise their potential impact.

“The earthquake may not have been felt in some of these areas, but evacuation should be immediate as a damaging tsunami is possible,” it said.

The Pacific Tsunami Warning Center said Vanuatu and New Caledonia were likely to experience the largest waves, measuring up to three metres.

“Based on all available data, hazardous tsunami waves are forecast for some coasts,” it said.

It said initial smaller waves were already reported in Tonga, and small waves were also possible as far afield as Japan, Russia, Mexico and the South American coast.

No damage or injuries were reported from the earlier quakes, both of which generated tsunami warnings that were later lifted.

Prime Minister Jacinda Ardern of New Zealand was among those given an early morning wake-up.

“Hope everyone is ok out there — especially on the East Coast who would have felt the full force of that earthquake,” she posted on Instagram after the inital shake at 2:27 am.

New Zealand experiences frequent seismic and volcanic activity but Emergency Services Minister Kiri Allan said she had never before experienced such a strong sequence of earthquakes.

“This has been an extraordinary morning for many New Zealanders up and down the country,” she said.

“From 2:30am this morning they have been up, worried about their homes and their families.”

The South Pacific nation recently marked the 10th anniversary of the Christchurch earthquake, when a 6.3 tremor resulted in 185 deaths in the South Island city.