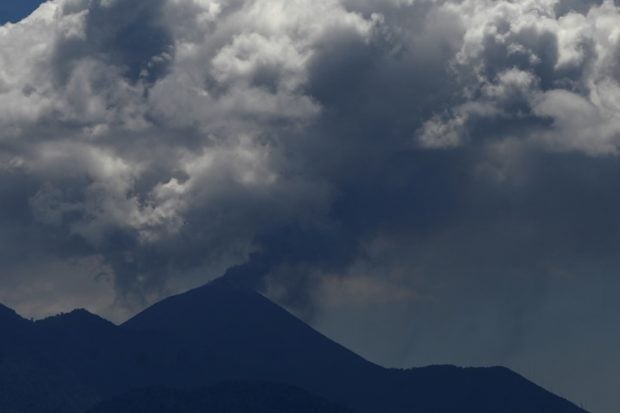 View of the Pacaya volcano erupting as seen from Guatemala City on February 21, 2021. Photo by Johan ORDONEZ / AFP

GUATEMALA CITY — Guatemala’s Pacaya volcano erupted on Wednesday, expelling lava for several hours and prompting the country’s meteorological institute to warn that incandescent volcanic blocks could rain down on nearby towns.

One of the Central American country’s most active volcanoes, Pacaya began to expel lava at dawn, creating an immense column of smoke, video footage from the institute showed.

“The Pacaya volcano has a very high level of activity, which has generated a strombolian type eruption, with strong explosions,” the meteorological institute, Insivumeh, said in a statement.

David de Leon, spokesman for the National Coordinator for Disaster Reduction (Conred), said civil protection teams were checking several facilities that could be used as shelters as lava continued to flow late on Wednesday.

Insivumeh said five towns, home to around 3,000 people, were at risk from burning projectiles from the volcano, which is located 28 kilometers (17.4 miles) south of Guatemala City.

Pacaya experienced some minor activity for a month before erupting on Wednesday.