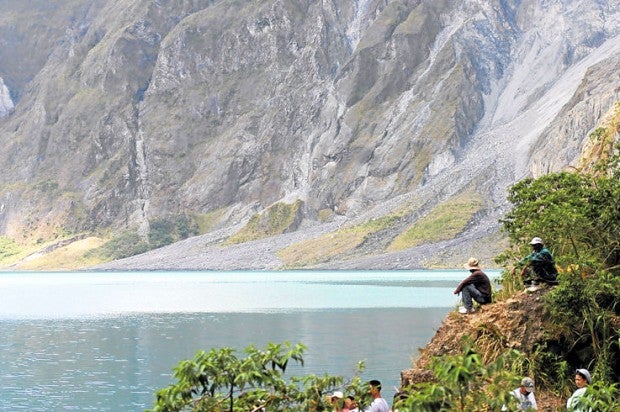 MANILA, Philippines — Authorities are closely monitoring Mt. Pinatubo in Central Luzon, which was placed under Alert Level 1 on Thursday.

The Philippine Institute of Volcanology and Seismology (Phivolcs) said in its 7 a.m.  bulletin that Alert Level 1 means there is low-level unrest in Pinatubo.

No imminent eruption, however, is foreseen despite the observance of persistent seismic activity.

Phivolcs advised that entry into the Pinatubo crater area “must be conducted with extreme caution and should be avoided if possible.”

Communities and concerned local government units surrounding Mt. Pinatubo were told to be always prepared for both earthquake and volcanic hazards and to review their disaster preparedness plans.

A total of 1,722 imperceptible earthquakes beneath the Pinatubo edifice were detected since Jan. 2020, Phivolcs said.

Mt. Pinatubo is part of the Zambales Mountain Range straddling the boundaries of Pampanga, Tarlac, Zambales and Bataan.
“The earthquakes ranged between ML0.5 and ML2.8 in magnitude; all earthquakes recorded are associated with rock-fracturing processes,” Phivolcs said.
Carbon dioxide, temperatures and acidity showed slight increases or remained unchanged, it said.
It added: “Given the persistence of seismic activity, DOST-PHIVOLCS is raising the status of Pinatubo Volcano from Alert Level 0 to Alert Level 1. This means that there is low-level unrest that may be related to tectonic processes beneath the volcano and that no imminent eruption is foreseen.”
Phivolcs likewise discouraged visits to the crater-lake. The Philippine Air Force secures the entry to the volcano via Barangay Sta. Juliana in Capas , Tarlac.
Aeta communities closest to the volcano are in Inararo in Porac, Pampanga; Sitio Tarukan in Barangay Sta. Juliana in Capas, Tarlac; and several  villages in San Marcelino, Zambales.
After nine weeks of unrest, Mt. Pinatubo erupted on June 15, 1991, accompanied by Typhoon Yunya that dispersed ash up to Indonesia.