Arroyo can stay at VMMC—Comelec 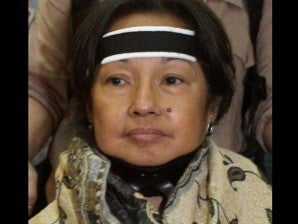 The Commission on Elections (Comelec) on Sunday said it was all right if former President Gloria Macapagal-Arroyo remained in detention at the Veterans Memorial Medical Center (VMMC) in Quezon City rather than in a regular jail.

“It’s OK with us. Our motion was to determine if she was already well based on her doctors’ assessment. If not, it’s OK, we’re not forcing her,” Comelec Chairman Sixto Brillantes told reporters.

The Comelec changed its mind after earlier asking the Pasay City court hearing the electoral sabotage case against Arroyo to find out from her doctors if she was fit to be moved to a regular detention facility. Electoral sabotage is a non-bailable offense.

On Friday, Dr. Antonio Sison, a government orthopedic surgeon caring for Arroyo, expressed a preference for letting her stay at the VMMC so her condition could be monitored while she underwent daily physical therapy.

The Department of the Interior and Local Government and the Philippine National Police had also said that Arroyo would be better off at the hospital for security reasons.

Brillantes said Arroyo would not be required to appear in court for every hearing so she need not undergo the strain of the long trip from Quezon City to Pasay City.

“They (defense) can file a waiver of appearance before the court. It’s allowed that she’ll not appear anymore,” he said.

Arroyo will be arraigned on February 20 on the electoral sabotage charge for allegedly ordering subordinates to cheat in the 2007 senatorial polls in Maguindanao.

Senator Antonio Trillanes IV, meanwhile, said House Minority Leader Danilo Suarez should not mislead people by saying that Trillanes was allowed to have laptops and cell phones when he was in detention in Fort Bonifacio and Camp Crame.

Trillanes took Suarez to task for using his case as a precedent to try and convince Speaker Feliciano Belmonte Jr. to allow Arroyo, now a representative from Pampanga, to have laptops and cell phones while in detention.

Trillanes said that when he was held at the Marine Brigade in Fort Bonifacio and later at the PNP Custodial Center in Camp Crame from July 2007 to December 2010, he was barred from having any gadgets.

Trillanes was already a senator then, having won in the May 2007 national elections.

“While I do not begrudge Representative Suarez his assertion of Mrs. Arroyo’s right to serve as an elected representative of Pampanga, he should at least get his facts straight,” Trillanes said.

“Mrs. Arroyo’s government did its best to make it difficult, if not impossible, for me to work while in detention. It’s not true they allowed me to use mobile phones and computers. They also barred me from receiving guests and holding committee hearings.”