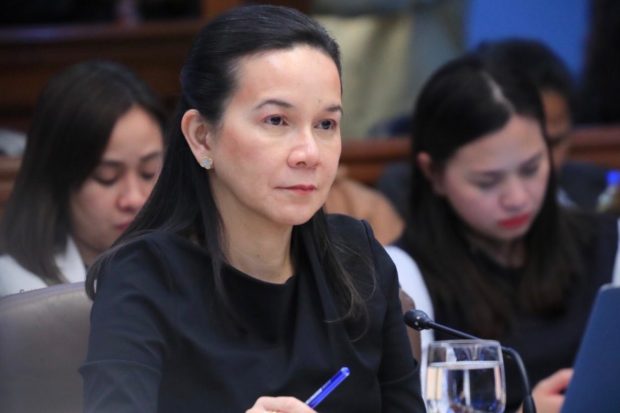 Senator Grace Poe during one of the Senate hearings. Photo from the office of Sen. Poe

MANILA, Philippines—Senator Grace Poe implored Malacañang to heed the agriculture sector’s call on not lowering the tariffs on rice and pork which could open the floodgates for imports that could further discourage local production.

A decrease in tariff could ultimately benefit rice exporting countries such as India, Pakistan, and China.

“African swine fever [ASF] wiped out pig farms in most of Luzon with big conglomerates now stepping back. How will local production recover if we flood the market with imports without the necessary assurance that pork and pork products that are sold in the market are free of the disease?” said Poe in a statement Wednesday.

Poe also hit the Department of Agriculture for its handling of the ASF that has reached Visayas and for not listening to the farmers and hog raisers’ pleas.

She added that it was the DA that petitioned the Tariff Commission (TC) to lower the levy on pork and rice imports on February 4.

“It is unsettling to see the DOF advocating a cut in tariffs especially now when it has been relying on borrowings for its spending as tax collection is down. Hog raisers have been begging to keep the existing tariff structure as lowering it will only ensure bigger profits for importers and lower collection for government. It is baffling to see both the DA and the DOF pushing for moves contrary to their mandates,” said Poe.

DA, however, said that its draft executive order on the pork and rice tariffs was already sent to Malacañang and awaits the signature of President Rodrigo Duterte.

The proposal means to lower the tariffs on rice imports to 35 percent from the current 40% rate for those brought in under the minimum access volume (MAV) mechanism and 50% for rice shipments shipped in outside the MAV.

Tariff on pork imports, meanwhile, will be lowered to 5% from the current 30% for those brought in under the MAV and 40% from outside the MAV.

The TC’s initial assessment showed that the average price of rice from India and Pakistan in the country is already lower than that of grain from Vietnam and Thailand despite the higher tariffs on rice imports from non-ASEAN countries.

Poe ultimately questioned the DA’s motive in lowering the tariff even though the country is already expecting a bumper harvest soon.

(Will the price of rice go down for our countrymen who go in debt just to find the money to buy them for their meals? Is depressing palay prices the objective because lower palay prices do not always result in lower rice prices for consumers? Part of the promise of the Rice Tariffication Law was to lower the price of rice. Ever since the NFA’s papers were passed down, the P29-per-kilo price of rice was also gone. Where’s the promise of cheaper rice? When NFA rice was taken out of the market, cheap rice was also gone. Who is profiting from DA’s efforts here?)

Read Next
Explosive goes off near COVID-19 test centre in Netherlands
EDITORS' PICK
Kai Sotto, Angelo Kouame lead Gilas final 12 vs South Korea
Palace: Duterte unfazed by ICC probe on drug war killings
Palace says ICC prosecutor report is ‘fantastical,’ based on ‘hearsay’
Smart brings KCON:TACT especially 4U to subscribers from June 19 to 27
Synology NAS: A photo storage and multimedia server for your home
Defending himself before ICC ‘logical thing to do’ for Duterte, says Drilon
MOST READ
Palace says ICC prosecutor report is ‘fantastical,’ based on ‘hearsay’
Murder suspect tries to sell car with dead GF in backseat
Duterte to meet with Sotto, Velasco to discuss fate of BARMM polls
Opposition ‘must go beyond anti-Duterte platform’ in 2022 polls – Drilon
Don't miss out on the latest news and information.