MANILA, Philippines — Some 99.13 percent of the more than 14.6 million public school students obtained a passing grade during the first quarter of the school year, data from the Department of Education (DepEd) has shown – which “surprised” Senator Sherwin Gatchalian.

During Wednesday’s hearing conducted by the Senate basic education committee, DepEd Undersecretary for curriculum and instruction Diosdado San Antonio said the agency collated reports from its regional directors on the number of students who received passing grades during the first quarter of School Year 2020-2021.

“We feel that the indicator we can use to determine whether the learners were able to learn are their grades and we have data for the first quarter,” he said.

According to San Antonio’s presentation to the Senate committee, while 99.13 percent of the over 14.6 million public school students whose grades were reported to DepEd passed during the first quarter of the school year more than 126,000 failed. 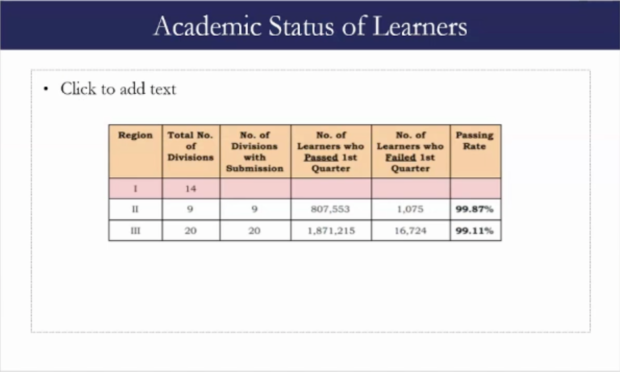 Data from the Department of Education on learners’ academic status presented during the Senate basic education committee hearing on Wednesday, March 3, 2021. 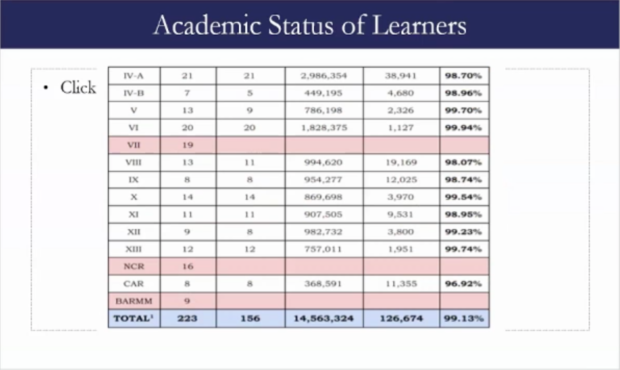 Data from the Department of Education on learners’ academic status presented during the Senate basic education committee hearing on Wednesday, March 3, 2021.

“Even if this is a high percentage we feel that the numbers in terms of those who have failing grades [are] also significant,” he pointed out.

However, the data excluded the National Capital Region (NCR), Region 7, and the Bangsamoro Autonomous Region in Muslim Mindanao since DepEd was not able to receive reports from those areas.

But Diosdado noted that DepEd later on obtained reports from NCR and Region 7, which showed a 95 percent and 99.17 percent passing rate, respectively. These figures were not included in the table presented during the hearing.

Gatchalian, chair of the Senate basic education panel, said he was “quite surprised” by the data presented by DepEd on the academic status of the learners.

“Of course I want all of them to pass but realistically we all know the performance of our students, so I’m quite surprised with that 99 percent passing rate,” the senator said.

“How do we interpret this because this is quite surprising considering that they are learning through distance learning, does this mean that they are absorbing and in fact learning all the lessons?” he asked.

In response, the DepEd official said the data indicates that the “learners seem to be learning.”

But San Antonio stressed that the data DepEd presented to the Senate panel were obtained from the department’s regional offices.

“The data that we have presented today were the reports that were submitted to us by our regional directors,” he said.

“It was really a very simple question that we gave them that they had to provide us with the numbers of learners obtaining passing grades in the regions where they are,” he added.

Still, Gatchalian said his committee would look deeper into how DepEd conducted its assessment.

“We need to fully understand the assessment conducted by DepEd, the actual results by DepEd. We also want to see a per subject analysis because we all know that we need to help our students by looking at their weaknesses in diff subject matters ,” he said.

At this point, San Antonio emphasized that what he had presented was based on the reports from DepEd officials.

“I will never submit a report that is not based [on] the ones forwarded to us by our fellow officials in the department. Ito pong table na to ay galing po ito sa aming mga report ng fields,” he added.

Gatchalian acknowledged this but maintained he was just surprised by the passing rate reported by DepEd and underscored the need to discuss the agency’s assessment method in another hearing.

“I’m very sure that those reports are not meant to show over performance or data that is not accurate. We need to just appreciate how this methodology was implemented,” he said.

“But for now, personally, this is my personal thought, it was just surprising that the results were 99 percent but later on in a different hearing we’ll appreciate it more by going in-depth,” he added.

Read Next
Miss Universe Thailand fired as mental health ambassador
EDITORS' PICK
Philippines, Brazil, Mexico to get Pfizer shots from COVAX in Q2 – Gavi
Duterte: ‘If you want me to die early, pray harder’
Pre-order the new vivo Y20s [G] to get a free TWS earphone
Smart three-peats as country’s fastest mobile network – Ookla
In good spirits: SMDC helps farmers and residents through Kadiwa Market
PH active COVID-19 infections climb back to over 157,000 with 11,378 new cases
MOST READ
Vico Sotto frets getting photos of ‘butt vaccination’ from Pasig dwellers
Metro Manila to have shortened curfew hours from 8 p.m. to 5 a.m. under MECQ
San Miguel Corp. continues to invest heavily in the Philippines’ future
COVID-hit Roque slams ‘un-Christian’ query on how fast he secured hospital bed
Don't miss out on the latest news and information.