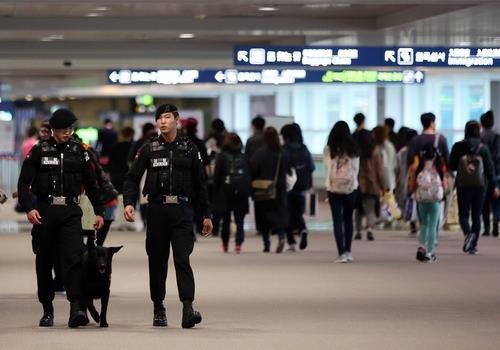 INCHEON — A 12-year-old YouTuber living in the United States has been identified as the alleged culprit of a terror threat against Incheon International Airport on the national holiday next week, officials said Friday.

The teenage boy, who was born in South Korea and is residing in the US, is accused of having uploaded a YouTube video that warns of an attack at the Incheon airport, west of Seoul, at 11 a.m. on the March 1 Independence Movement Day, according to the Incheon International Airport Police Corps.

The 10-second-long video, uploaded Sunday, has since changed its content to a message that Osama Bin Laden, the late leader of Al Qaeda and the mastermind of the September 11 terrorist attacks, should not be blamed

The airport police launched an investigation into the online content after being tipped off about the clip on Tuesday.

With the cooperation of Google, the parent company of YouTube, the police confirmed that the video was uploaded in the US and tracked down the suspect based on his login history.

Investigators said they have shut down the boy’s YouTube channel and are considering charging him with violation of the Aviation Security Act.

The police said they will beef up security at the airport for a while as a precautionary measure, although there is scant possibility of terrorist attacks.

“It seems difficult to find ways to question the YouTuber who uploaded the video after gaining cooperation from the foreign authorities,” the police said. Yonhap

Coming soon: Experts’ findings on use of ivermectin to treat, prevent COVID-19

Bulacan Katipunero kin up in arms over statue of hero