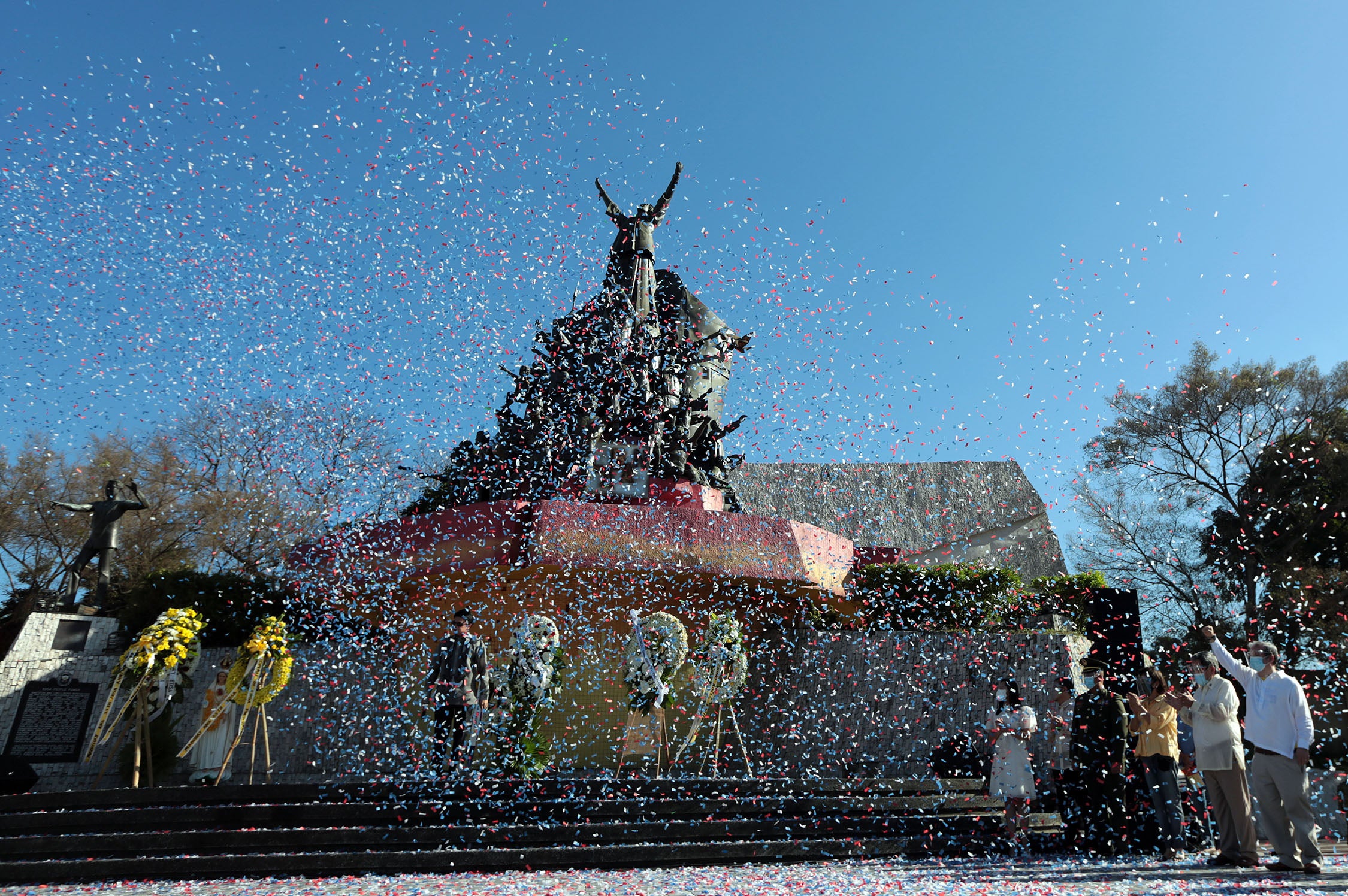 OFFICIAL PROGRAM Quezon City Mayor Joy Belmonte and other officials mark the 35th anniversary of the 1986 Edsa People Power Revolution on Thursday amid a rain of confetti. —GRIG C.MONTEGRANDE

In just 20 minutes, the official program celebrating the 35th anniversary of the Edsa People Power Revolution—the bloodless upheaval that ended the dictatorship of Ferdinand Marcos 35 years ago and was applauded by the international community for restoring Philippine democracy—was over on Thursday.

But at least three more political gatherings—each giving its own take on the 1986 uprising—followed after the government wrapped up its commemoration at the People Power Monument in Quezon City.

The most surprising was the motorcade staged by a group urging Davao City Mayor Sara Duterte to run for President in 2022 and succeed her father. This was despite her insistence that she had no such plans and Mr. Duterte publicly discouraging his daughter from joining next year’s presidential race. 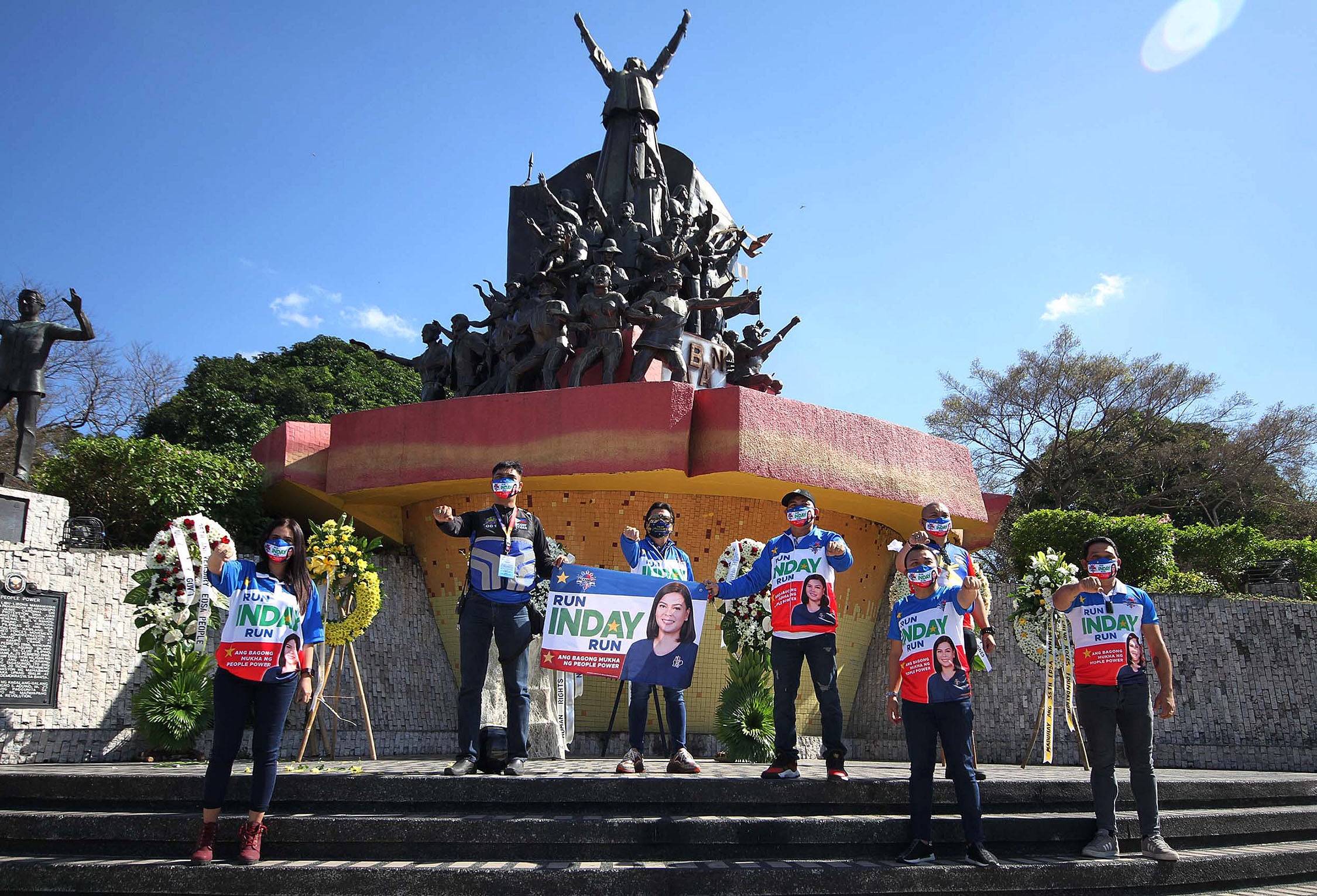 Earlier that day, supporters of the President’s daughter, Davao City Mayor Sara Duterte, show up for a photo op at the site. —CONTRIBUTED PHOTO

In attendance were representatives of the National Historical Commission of the Philippines, Spirit of Edsa Foundation and August Twenty-One Movement. Retired Air Force Gen. Antonio Sotelo joined as a representative of former President Fidel Ramos. Singer Renz Verano closed the affair with a rendition of patriotic songs.

Although the crowds attending the program have thinned over the past few years, it was much smaller this time around due to the pandemic.

Less than a hour later, the “Run Sara Run’’ motorcade arrived, with the campaigners staying at the monument for a few minutes and holding up their streamers for a photo op.

Later, it was the turn of Bukluran ng Manggagawang Pilipino, Sanlakas and allied militant groups, who came bearing placards and streamers calling for an end to the “Duterte dictatorship and dynasty.”

They were followed later by another left-leaning coalition— composed of Bagong Alyansang Makabayan, Karapatan, Kadamay and the Save Our Schools Network—who also marched toward the People Power Monument after staging their rally outside Camp Aguinaldo. 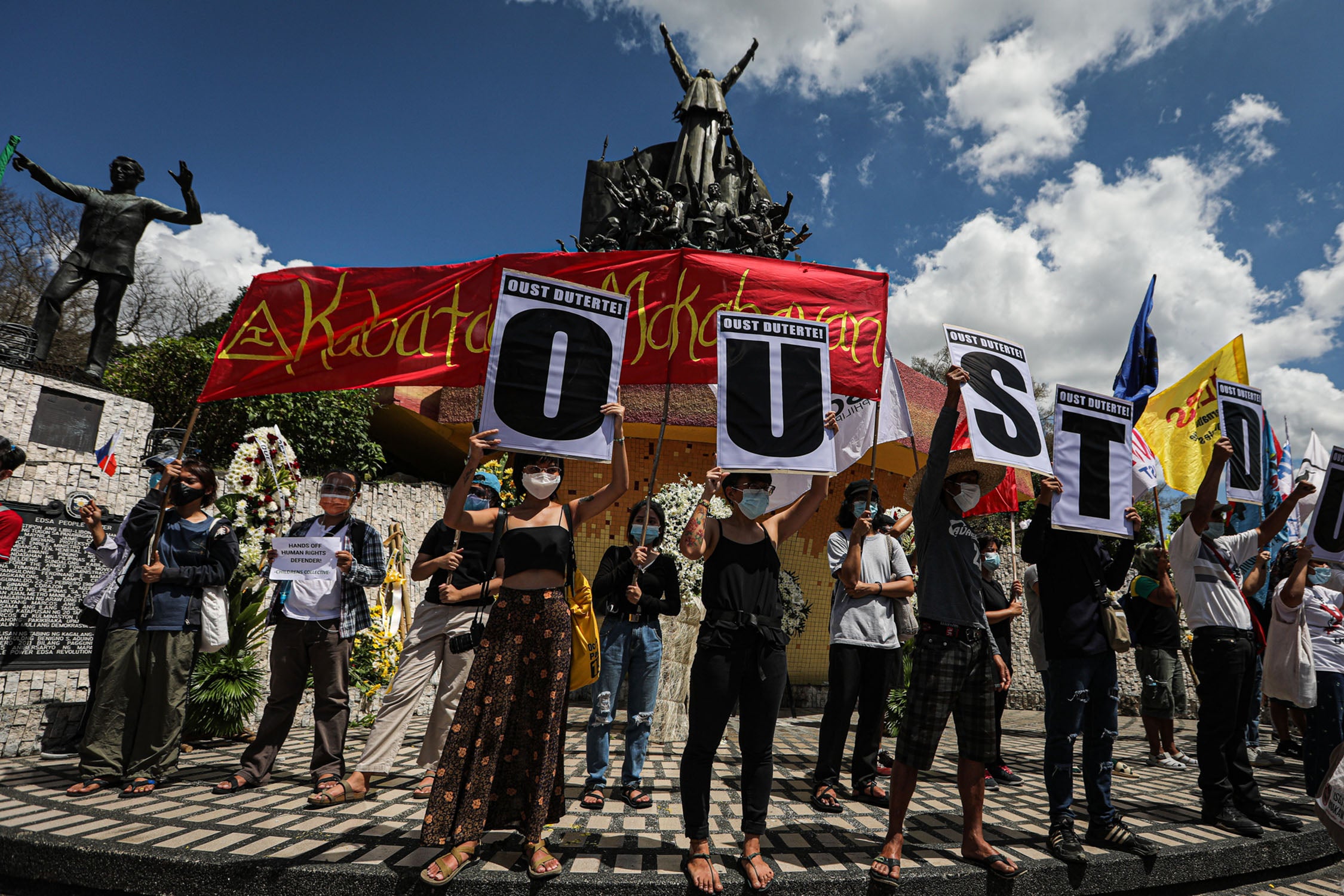 OPEN TO ALL Militant groups also gather at the People Power Monument in Quezon City on Thursday to call for the ouster of President Duterte whom they liken to the dictator Ferdinand Marcos. —CONTRIBUTED PHOTO

In his Edsa anniversary message, President Duterte on Thursday said the People Power Revolution was “inspired by the valor of those whose sacrifice made the liberties we enjoy today possible.”

“As we contemplate the relevance of this occasion, let us proceed with renewed hope and optimism toward the realization of our shared aspirations for our nation,” he said. “Guided by the spirit of Edsa, let us set aside our differences and work together in building a legacy that we can proudly leave behind for future generations of Filipinos.”

Vice President Leni Robredo said more than three decades after the end of the Marcos dictatorship, democracy in the country remained under constant threat and that the “promise of Edsa” had yet to be completely fulfilled.

“There are efforts to revise history for the personal agenda of a powerful few. We are still in the process of forging the nation we dreamt of, and fought for, on Edsa,” she said on Thursday.

Robredo’s latest political triumph was the unanimous dismissal by the Supreme Court acting as the Presidential Electoral Tribunal of the election protest filed by former Sen. Ferdinand Marcos Jr., the late dictator’s son and namesake, and her rival in the 2016 vice presidential race.

The challenge for Filipinos now is to continue the work that needs to be done, Robredo said. “In doing so, we must find a way to work together.”

“This is the most important lesson from Edsa, and this is exactly what we need to overcome the challenges of the pandemic and our current situation: that the answer to our problems is not a single person, but each other,” she said.

In a message from the Catholic Church, whose influence was also a decisive factor in the success of the revolt, Archbishop Broderick Pabillo of the Manila archdiocese said Filipinos must not “let go” of Edsa’s promised freedom and oppose all attempts that control and stop people from expressing themselves.

On the eve of Thursday’s commemoration, Papal Nuncio Archbishop Charles John Brown led the symbolic release of 35 pigeons outside the Our Lady of Edsa Shrine.

“Justice is the foundation of peace in the society. When there is no justice, when people can’t receive justice, they react in violent ways,” Brown later said during Mass. “So whenever we [do what we] can to promote justice in society, we are promoting peace.”

Balanga Bishop Ruperto Santos called the peaceful uprising on Edsa a “blessing” that showed the best in Filipinos and what was beneficial to the nation.

“Let us commemorate Edsa to give what is best, right and moral to our country and to God; not to oneself or to a particular party or color,” Santos said. —WITH REPORTS FROM JEROME ANING, JHESSET O. ENANO AND JODEE A. AGONCILLO